The Last Guardian And The Fruits Of Patience (Gamechurch)

The Last Guardian opens with a creature named Trico roaring in your face. It’s wounded, chained, and starved—not the best time to befriend it, but you’re left with little choice since you’re both trapped in a pit. You’re then prompted to remove its metal leash and the spears stuck in its body. You feed it barrels filled with an energizing, blue liquid as well. Trico remains hostile by kicking you away twice, but once it stands up and shakes away its cumbersome shackles, the creature stares into your character’s eyes as its feathers float around the room. It’s hard to convey how, but the eyes seem to say, “Thank you.”

The Last Guardian confronts us with our own self-centeredness and challenges us . . . to give rather than merely take.

This is how the game establishes a rapport between you and Trico. While the story is linear, your experience can be profoundly unique compared to another player’s session. It relies on your reception to the game’s message about practicing patience.

Because The Last Guardian is a video game, you’d assume Trico should be designed to impeccably carry out commands and go wherever you  desire, much like D-Dog in Metal Gear Solid V: The Phantom Pain or chocobos in Final Fantasy XV. However, Trico is unruly and unpredictable. It can refuse your demands and hesitate to offer help with platforming and puzzle challenges.

This rare AI companion throws a wrench in our accustomed expectations: Trico is intentionally irrational. Creative director Fumito Ueda said, “This creature isn’t like the cute pets that exist in other games, or an ally that’s really useful. The role of the creature is ambiguous; that’s something we wanted to express in the game, and it doesn’t always do what you ask it to do. That’s one of the themes of The Last Guardian” (Edge Magazine, July 2016, p. 66). 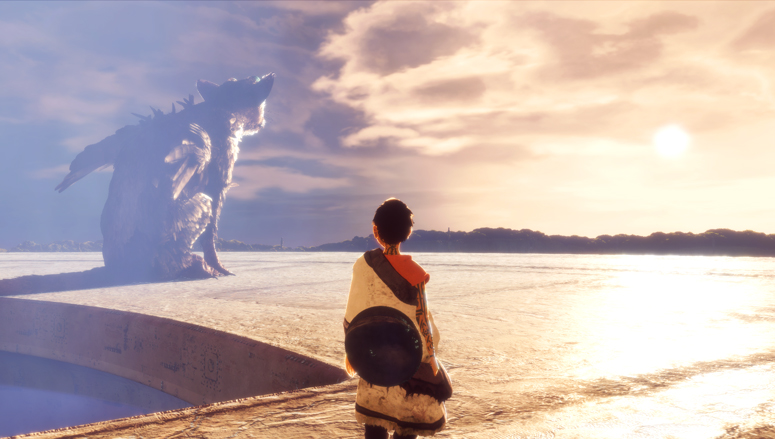 Ueda invites players to think about how they treat Trico. Is this creature a pet that you console, feed, and give attention to? Or is it a self-sustaining companion who exists to do what you say without a hitch? Do you roll your eyes at Trico or cater to its curiosities and fears? Just as “The Lord is merciful and gracious, slow to anger and abounding in steadfast love” (Psalm 103:8) toward us, Trico tests our capacity to act similarly toward others.

In his book Respectable Sins, the late Jerry Bridges describes impatience as “a strong sense of annoyance at the (usually) unintentional faults and failures of others.” He believes this arises out of “our own attitude of insisting that others around us conform to our expectations.” It’s a natural response we unfairly attribute to Trico since we expect video games with flawless companions, but the creature’s designed limitations should give us pause about our irritability and the reality of raising a wild animal.

Just as “The Lord is merciful and gracious, slow to anger and abounding in steadfast love” toward us, Trico tests our capacity to act similarly toward others.

Depending on how Trico is treated, it will actually improve in its responsiveness and behavior. It is uncooperative if you don’t alleviate its hunger with optional barrels or pull spears from its body. Should you do these things, it will start predicting your commands and be more affectionate. This shift is antithetical to its base nature, making your bond even more precious as your kindness and love slowly displace the beast’s instincts and savagery.

My relationship with Trico reminded me of the curious nature of redemption for animals that C.S. Lewis outlined in The Problem of Pain: “Now it will be seen that, insofar as the tame animal has a real self or personality, it owes this entirely to its master. If a good sheepdog seems ‘almost human’ that is because a good shepherd has made it so.” In that sense, The Last Guardian confronts us with our own self-centeredness and challenges us to endure, build trust with Trico, and give rather than merely take. Our patience not only grows, but is also evident in Trico as you learn to labor in love for each other.