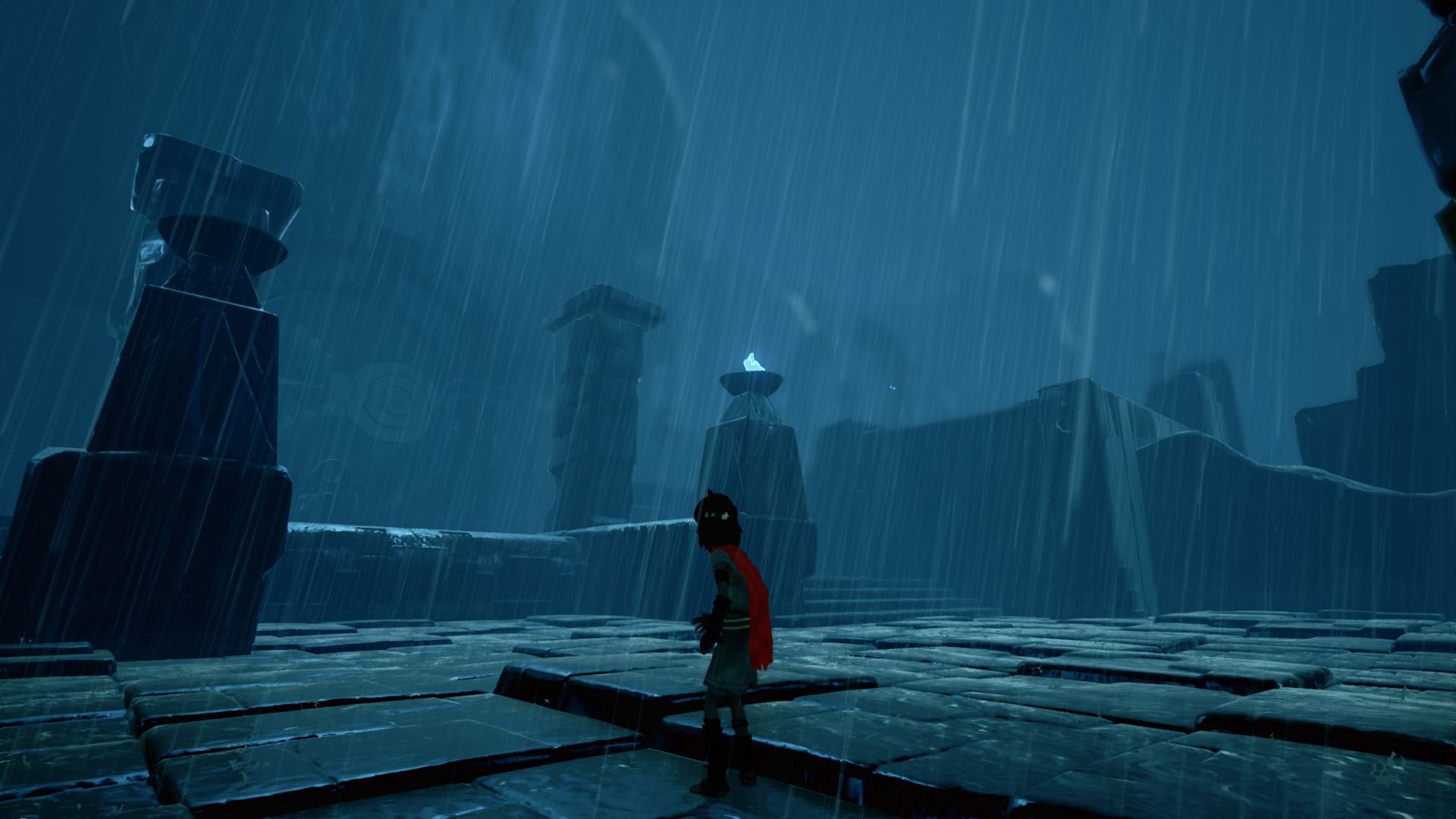 Critical Distance featured this article in one of its weekly articles curating game journalism pieces.

The books or the music in which we thought the beauty was located will betray us if we trust to them; it was not in them, it only came through them, and what came through them was longing. – C. S. Lewis, The Weight of Glory

RiME explores a humanly ubiquitous experience that no one is ever prepared for: grief. This isn’t a mere melancholy, but an intense aching of the soul that immobilizes the whole being. The oft cited five stages of it are visually and metaphorically portrayed through the game’s narrative, which capture the tumultuous, irrational directions our emotions sway in when sorrows befall us. Denial, anger, bargaining, depression, acceptance—these ebb and flow with us, sometimes going out of sequence or reverting in order with the tides of grief.

If the game’s development is any indication, Tequila Works got caught in its wake as well. Creative director Raúl Rubio Munárriz indicates as much with a heartfelt letter in the reviewer’s guide. “[W]e…had to navigate unexplored waters, face the unexpected and manage our own real and unpredictable human emotions to make RiME a reality.” From its origins to eventual completion, various experiences of grief guided the game’s trajectory, but strangely, profound beauty is often birthed from such experiences.

Rime’s puzzles and platforming provide space for players to reflect on the metaphorical surroundings and what they mean in relation to the stages of grief. The Cycladic towers and rainy monoliths are doubtlessly breathtaking to behold, but the sweeping score and use of the player character’s voice are doubly so. The former is almost continuous, even dynamically reacting to actions and swelling or softening at unexpected moments. While David Garcia Diaz’s score is characterized by an undercurrent of sadness, it breaks out in joyous, courageous, and moody motifs when you least expect it.

You play as a young boy who has washed ashore a mysterious island, and besides climbing around and fiddling with objects, his voice allows you to contextually interact with the environment. Whether lighting up, shattering, or activating things around the island, it’s always done with the single press of a button and never changes in function. This doesn’t mean he always emits the same sound. He’ll sing out, quietly hum, grunt, exclaim in wonder, or even cry depending on his context. While there is no dialogue, his voice is nevertheless important part of the experience and mirrors the mood set by the music and visuals or conflicts with them in revelatory moments where I reassessed my perception of the boy’s emotions.

It’s easy to assume that RiME expresses the back and forth emotions of grief primarily through its story and visuals, but one would be remiss to ignore how its aural inclinations are equally important and powerful. This is evident in many of the Psalms, which arose out of times of intense emotion. When David was crushed by guilt, he cried out in song to be forgiven of his transgressions (Psalm 51). When he felt furthest from God’s presence, he made music of his sorrow and thanked God all the same (Psalm 13). Taken as a whole, his poetic outpourings are emotionally erratic and surprisingly confrontational, but not only do they truthfully capture how grief impacts the soul, but also how music is one of the most natural ways to express it.

Of course, while RiME doesn’t direct or give voice to the emotion charging its audio in explicit worship, there’s still an intrinsic longing and divine beauty that will enrapture players with its strength. This is at its truest in regard to grief. Along with many other renown composers, George Handel was believed to have suffered depression, compounded by years of unsuccessful works. When he wrote “Messiah” in a period of three weeks at the lowest point of his career, it was praised all around and has become eternally iconic. No matter who you are, the piece stimulates a unifying reaction of wonder as A Slice of Infinity managing editor, Jill Carattini, noticed in a public performance of it. “Certainly, that our intense reaction to beauty is often one of gratitude is curious, particularly when we find ourselves feeling thankful to no one in particular. No giver of beauty, no maker of the very senses that move us with chills down our spines and tears to our eyes.”

I felt this way playing through RiME. Just as the boy’s voice was wont to change as I guided him through the trials of grief, my emotions swayed along with the music in an appreciation for its sorrowful beauty. Because the overall game addresses and rose from troubled times, it demonstrates the emotion shouldn’t be suppressed or reveled in alone, but honestly and cathartically expressed. Sometimes this is accomplished through music, and as David’s Psalms demonstrate, it can ironically lead others to a tearful, reflective joy. RiME affects its players in the same way, prompting them to ponder how it can arise from darkness, why soulful music conjures amorphous longings for the divine, and where such beauty might come from.