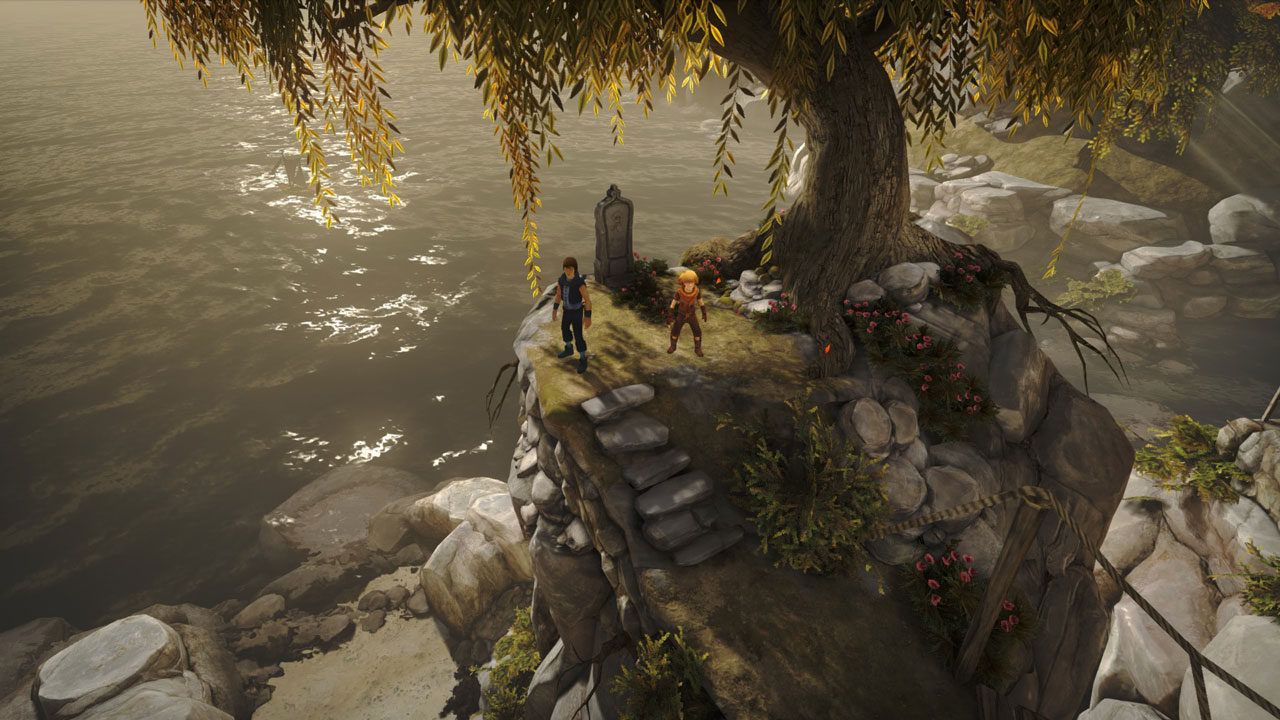 A Touching and Tragic Tale of Two Sons

It had been quite a while since I bought an Indie game from the Xbox LIVE Marketplace, let alone the last time I turned on my Xbox 360. However, among titles such as Bastion, Halo 4, and Alan Wake, Brothers: A Tale of Two Sons is one of those rare instances that turns me away from my PS3 to give my Xbox 360 some needed – albeit short-lived – attention. However, I did not expect my experience to be marked by my own tears this time.

Brothers tells a tale filled with laughter, camaraderie, danger, and adventure, which are some of the things I anticipated that I would see. Surprisingly, this is somewhat of a deceptive illusion. The game is also sorrowful and dark due to eerie, disturbing themes and events. I found myself in a constant flux of emotions ranging from cheeriness to unsettledness to excitement. This also expresses how I feel about the game itself. There are many praiseworthy aspects, but there are some negative ones that cannot be ignored; I’m a bit torn and go back and forth as to how important each pro and con is and how much a select few influence my opinion of my overall experience.

However, I can conclude that Brothers certainly does not disappoint. It constantly managed to keep my interest piqued primarily due to its unique method of telling its remarkable story, emotionally charged music, and stunning visuals. 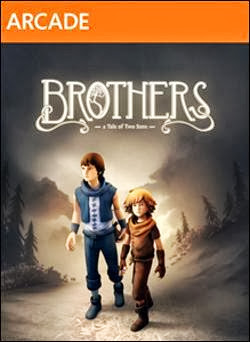 The majority of games follow the sensible pattern of controlling a single character or group of characters at one time. In Call of Duty, you act as one soldier. In Wonderful 101, you command a squad of superheroes that act as one. In Pokémon, you hold up to six monsters in your inventory with up to three in an active battle, and the list goes on. However, Brothers takes an unconventional path by giving the player control over two brothers (hence the title) with the right analog stick devoted to the younger one, and the left to the older one. While this sounds intriguingly fun, it’s not as easy or smooth as one would expect. While the controls themselves are indeed tuned well and fittingly simple (the only other buttons in use are the left and right bumper triggers, which are used so that the brothers can interact with objects in the environment), your mind can become jumbled up often when trying to maneuver the characters. I found myself having to stop a lot for a few seconds when I accidentally crisscrossed the characters, which sent them running away from each other due to the subsequent confusion my brain had trying to figure out how to readjust their directions. Unfortunately, this is not a problem on Starbreeze’s part. The control scheme they implemented is inherently difficult to use and would be extremely difficult to master. No developer could have made it any easier or better. But does this excuse them from me complaining about it as a negative? No, but it’s important to know that this is not a fault on their part. They did what they could with what, really, is the best control scheme for their game, and that’s what matters.

The only way to remedy this to a significant extent is to keep the brothers in order on the screen with the order of the sticks. Since the right stick controls the younger brother, always keep him on the right side of the screen, and vice-versa for the older brother. It makes an extremely significant difference, so make sure to do this while playing.

As for the actual gameplay itself, it has the makings of an adventure game with a focus on platforming and puzzle solving. Traversing levels by jumping, climbing, and inching across ledges is great, which functions well and feels nice when your mind doesn’t need to focus on keeping the brothers from veering off the path. Some actions are more demanding, which require decent timing and specific button presses (especially with one, particular sequence involving intense teamwork), but these things are good; the whole experience is void of unnecessary complications in this area. On the other hand, the puzzle solving is somewhat disappointing. Figuring out how to access certain areas and beating what little bosses there are is far too effortless. Perhaps this was an intentional design choice to keep the story of the game moving at a good pace, but I would’ve personally loved a mix of puzzles with ones that were larger in scope and more complex to solve.

All of the gameplay definitely shines and works well when it does, but the annoyingly intrinsic problems of the controls and the undemanding puzzles hold the game back a bit in some ways.

Sound Effects: There’s not much to tell here. Everything sounds high quality and realistic. Boulders tumbling down a hill, the creaking of a rope under strain, the roar of waterfalls, the ambience of a large cavern or a forest in the middle of autumn…you name it. Nature is not only well portrayed, but sounds good too.

Voice Acting: Brothers is an interesting case in that there is an element of voice acting to it, but it’s sparse and unintelligible because the language the characters speak is completely made up and isn’t heard often. One would think this is an odd decision, but it ends up being ingenious in uniquely telling the story and deepening the characters. Instead of being told what is being said, you have to rely on your own interpretation of the characters’ inflections and body language to imagine what they’re feeling and saying to each other. Thankfully, there is so much to go off from it. The voice performances of the characters (especially the brothers) are heartfelt and natural, which makes them easy to connect with on an emotional and personal level.

Music: The soundtrack in Brothers is absolutely phenomenal. It has Celtic and Nordic musical influences, which make it reminiscent to the music from the Lord of the Rings films, and just like how it makes the films feel so much more mythical, adventurous, and grand, it has the same effect on the game. It simply wouldn’t feel the same without it. The spine-chilling vocals and haunting violin that fill the most pivotal scenes are well placed and fitting. And although I wish there was more music, the quiet, soothing ambiance that’s present throughout most of the game was a better route to go with in the end. Too much music would have felt overbearing and unnecessary, even if it had been excellent.

Indie games have a knack for possessing a particular charm in their visual styles. Journey, Bastion, Limbo, and Thomas Was Alone are only a handful of titles that exhibit this flair I speak of, and Brothers is no exception. The environments are robust and surprisingly vast in scope, bursting in detail with vibrant color and aesthetic appeal. There are even benches that the brothers can sit on at certain points in the game that zoom out to give a broader look at impressive, breathtaking views. This is further bolstered by the constantly changing scenery, which never feels rushed at all. From snowy towns to leaf-laden forests to, shall we say, unsettling locales, Brothers is a visual spectacle to behold. Starbreeze created a beautiful world brimming with myth and mystery.

One day in a quaint village near the misty shores of an ocean, a pair of brothers discover that their father has been stricken with a fatal disease. When they bring him to the local physician, he indicates there is a chance to save him. However, they must go to foreign, dangerous lands to find this cure. Out of deep love and bravery, they go headlong into this quest regardless of the possible consequences.

The game may start with a grave issue, but I thought it would turn into a joyous journey filled with excitement and satisfying, continuous payoffs. Although there were certainly points in the game that met this initial impression of mine, much of the story presents hardships for the characters, which results in multiple disturbing, depressing, and challenging scenarios for them. At one point during the game, just as I mentioned in the first paragraph, I actually cried at what was taking place in front of me. It was the first time I had done so while playing a game, and this is simply due to how beautifully and elegantly this specific thing was presented. When the game eventually concluded, it received a rare ovation from me due to its unexpected poignancy and brilliance with not only the story itself, but with its pacing, themes, and presentation. It’s easily the best part of the game and alone warrants its value.

It surprised me that Brothers is a 3-4 hour-long game. Although the length is appropriate and understandable, $15 is a bit of a steep price to pay, especially since there’s no extra content (besides the usual achievements). I wish it had been at least 5-6 hours long because I could have definitely seen this game having more locations to traverse, a longer story, more characters, and deeper character development. Regardless, I still think Brothers is a worthy game that should definitely be played by all. The price may deter some due to its length, but if it were less than $10, there is no excuse for any person to not buy the game.

Although Brothers is a bit short, lacks compelling puzzles, and is a bit annoying at times to control, the beautiful visuals, emotionally deep story, moving music, unique voice acting, and mostly wonderful and simple gameplay make it something that leaves a lasting impression. It should rank among the best of Indie games for what it is and how well it accomplishes its novel and daring ideas. You could say that this game represents what everyone is craving for on the game market in an age oversaturated with uninspired games. And although this may be at the cost of a few minor missteps, I’m more than willing to accept those with the whole package when it comes to memorable experiences like Brothers.