There’s a humorous video comparing the look and feel of movement throughout the Dark Souls trilogy. I’d say the first game has a smooth, slow pacing. The second game’s a bit more erratic but characterized by the same speed. Dark Souls 3 is…well, it’s like it took cues from its cousin Bloodborne and doubled the intensity of movement for everything. My eyes went wide with how far and fast my character could roll from the start—not to mention at the more relentless, rapid offense of enemies. But the closure to the series isn’t all different. With Shinji Mikami in the director’s chair once more, it signals a return to design principles that drove the original game. It doesn’t quite surpass it, but rises above its predecessors in some areas that make it a close contender for my favorite Dark Souls. 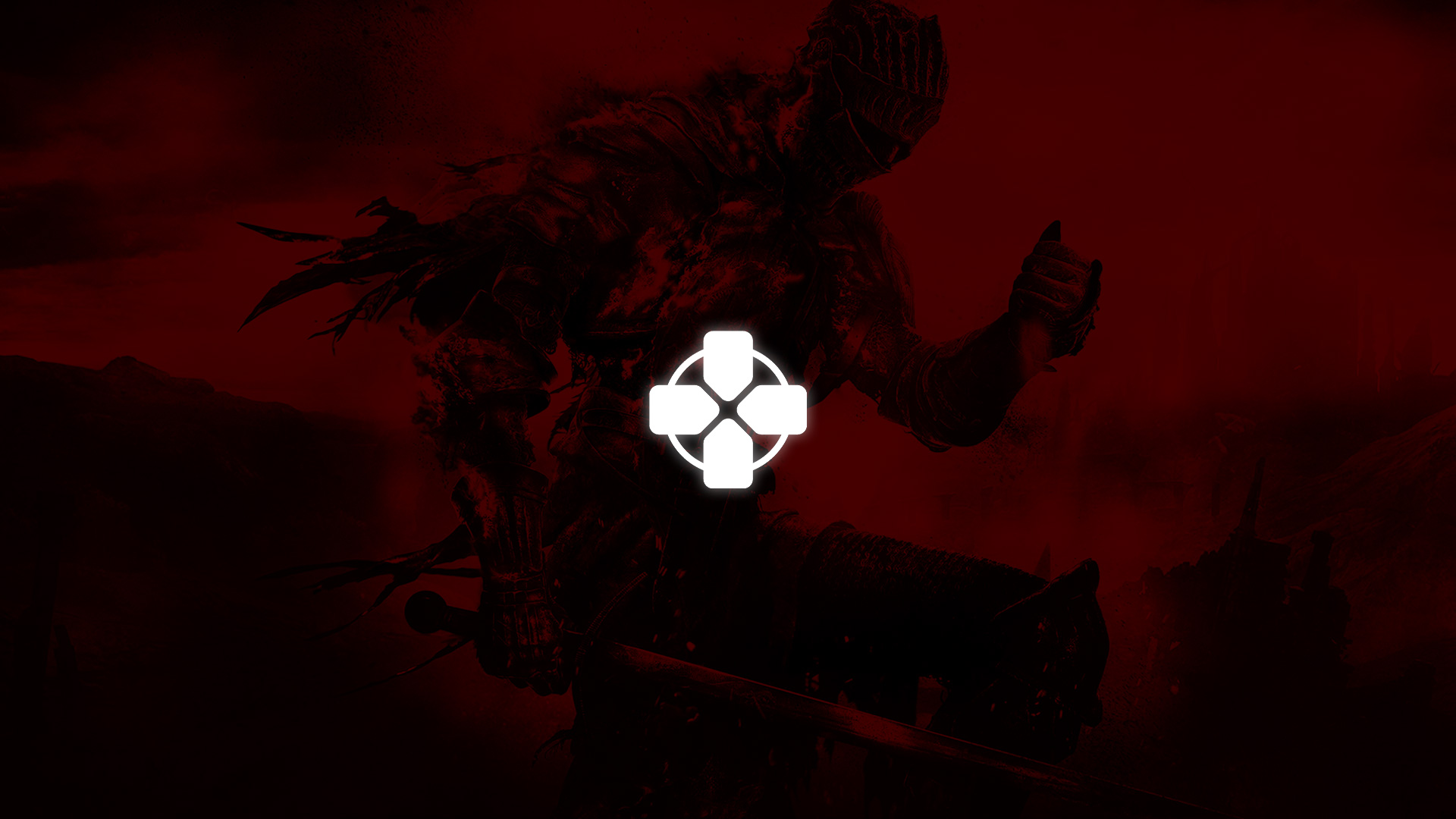 Really, movement is the most notable thing to discuss first. Gone are the awkward, stilted controls of Dark Souls II. The third game handles much more like the first one but is quicker. I relied more on rolling than shielding because it’s not as risky, and while the game retains the series’ defensive style of gameplay, don’t expect to hang back as much as you have before. The reason why Dark Souls II suffers from bad bosses is because their move pools are slow and stationary. Fume Knight and The Lost Sinner are exceptions that echo the dynamism of Artorias, Ornstein and Smough, and Lord Gwen from the first game. Nearly every Dark Souls III boss is built upon their framework with aerobics and aggression that would give Bloodborne’s Gascoigne and The Orphan Kos a run for their money. I can’t say I disliked any of the third game’s bosses because none of them gave me chances to play it safe or cheese my way to victory. Even the first game suffers from these issues with some bosses, so you could say the finale has the most consistently pleasing assortment of bosses in the trilogy.

Skills are a new mechanic that bring a welcome wrinkle to the qualities of equipment. Pressing the bottom left bumper with your shield up now classifies weapon parrying as a skill for some shields, but parrying magic and boosting stats are new abilities for some shields. This affects weapons the most significantly. Sometimes pressing the bumper will make your character adopt a new stance that paves the way for two special attacks. Heavy swords have a skill where your character stomps on the ground to briefly enhance poise (lessens chance of staggering or being interrupted when hit) and strength. Each weapon has one or two new moves that enhance the amount of strategy and options going into combat. Skills pull from mana just like magic and pyromancy, and what’s nice is that—instead of depending on other limited items to restore mana—there’s the new Ashen Flask. For those who don’t need an abundance of them with magic builds, you have the option to split your flask supply (e.g. if you upgrade to ten, you can split halfway between Estus and Ashen, have two Ashen and eight Estus, etc.). It’s a quality-of-life change that’s great for switching strategies with enemies since I would oscillate between relying on CQC and pyromancy. 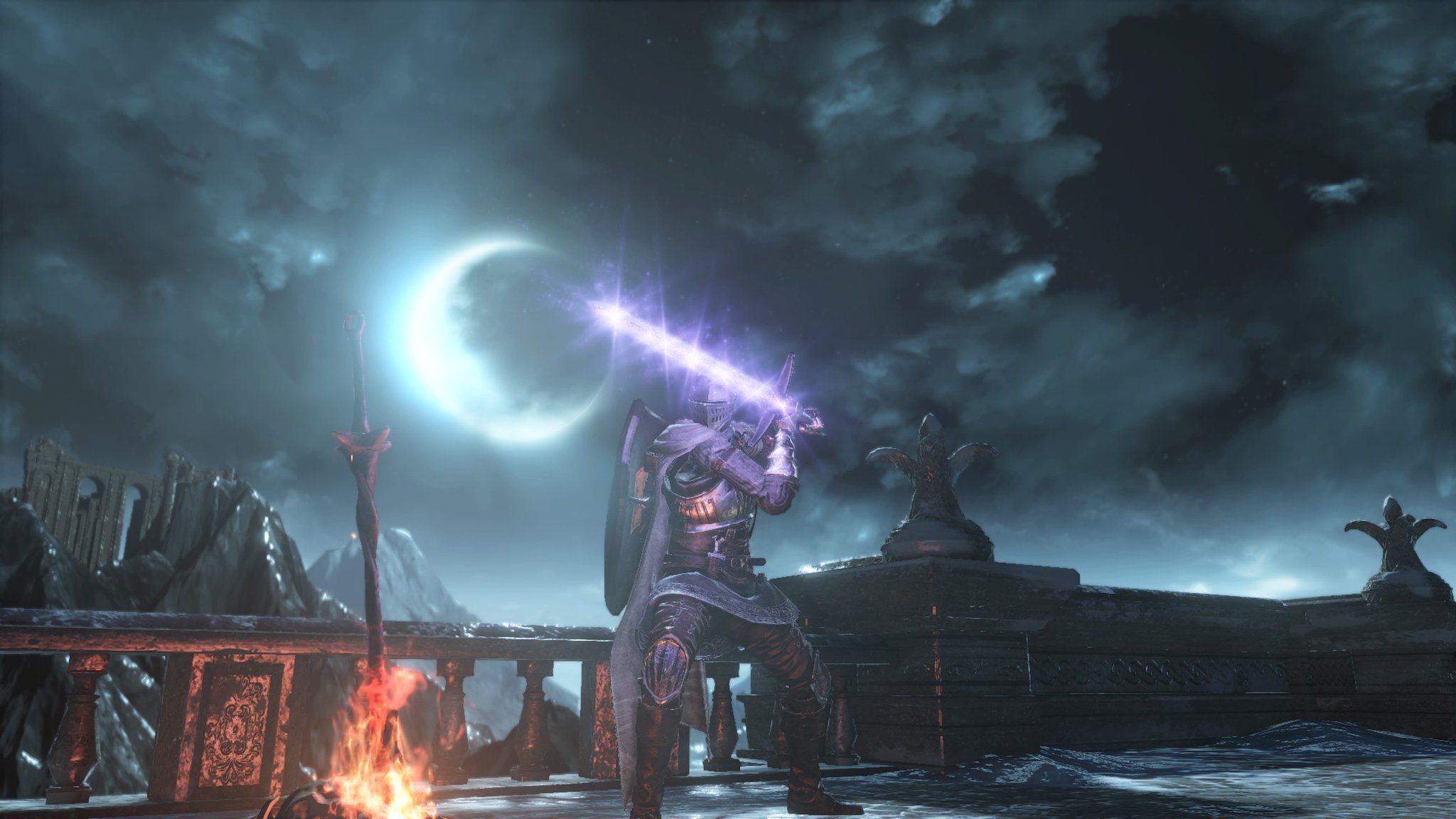 The Sword of Judgment is an example of adopting another stance. Your character will pose like this, which you can then follow up with a powerful jab or swing. What makes this weapon unique is that the swing will send out a wave of magic! Discovering unique properties like this incited me to try out more boss weapons (and normal ones, for that matter) than any of the prior games.

Dark Souls II instigated welcome changes to ridding the series of unnecessary obfuscation that the third game continues. You get all of your weapon leveling and upgrading done with the OG blacksmith (armor is an exception this time, as far as I experienced). The difficulty of leveling is more in line with the first game, but upgrading is akin to the second. All you need is specific materials to buff a weapon’s stats in categories like bleeding, fire, magic, and so forth (there are more types to choose from with new materials that grant advantages over particular classes of foes, too). Boss weapons are immediately accessible with an NPC in the main hub area in exchange for their respective boss souls and a small fee. In other words, the RPG systems (and UI, for that matter) consist of incremental improvements and streamlining over the leaps in tasteful accessibility that the second game innovated with. If it ain’t broke, don’t fix it.

Dark Souls III goes back to its roots with the way you navigate its world. Demon’s Souls is set up with a closed-off hub world detached from its set of sprawling levels that players warped to. Dark Souls departed from this setup with a brilliantly laid-out world that was (almost fully) interconnected with insane verticality. Dark Souls II has some places that extend out from the hub of Majula, but most are detached, linear areas that make fast travel a frequent tool instead of immersive exploration. The last game isn’t like the last two, but most like Demon’s Souls. The Firelink Shrine is a small area unto itself that segments the world into large, conjoined areas. It’s what Dark Souls II should’ve done to keep players grounded by motivating them to backtrack and take paths they missed. Nothing will ever match the excitement of discovering how the first game’s world fits together, but it brings back some of that with massive castles, towns, and more with better level design than the previous game. 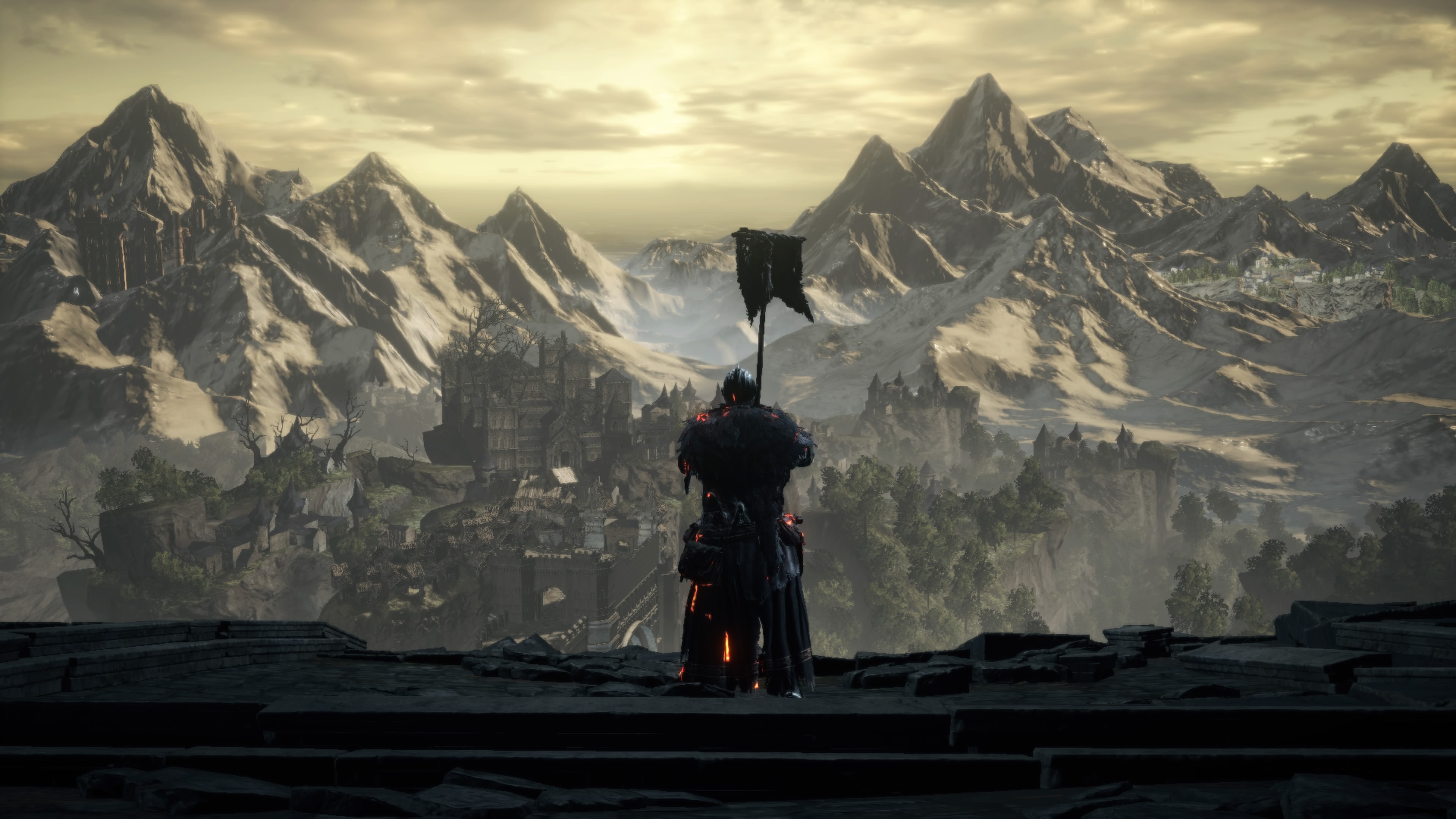 I love it whenever games show you distant lands you’ll travel to. Once you make it over to the Undead Settlement, you can look back to where you were standing and appreciate the scale of the world.

I’ve always been mildly entertained by Dark Souls’ soundtracks. There are a couple tracks that stick out, but this entry musically floored me from beginning to end. The sauntering, deep wails of the male choir in The Congregation felt like it emanated from the host of possessed priests I fought. There are more second forms to bosses than in any other title, and that change is reflected in the emergent music that’s raised a key or made more dramatic. There’s a profound sense of melancholy and finality to the compositions that complement the tone of the dying, ashen world you journey through.

And a dying, ashen world this is…yet gorgeous all the same. There was an underlying magic to the first game’s world and glimmers of a peaceful, vibrant world in the second. Dark Souls III is a dreary, dilapidated, and desolate place unlike any of its peers. You’ll walk through alleys of swords and empty suits of armor half-buried in ash; bleak, monolithic ruins of all-too-familiar ruins; castles that have sunk into swamps and been consumed by nature. It’s a trip down memory lane with mostly new sights that are just…sad. From Software’s attention to intricate detail, world cohesion, and physics are at their best here. Backdrops have come a long way as well, but the sin that mars my appreciation for the visuals is an uncapped, inconsistent frame rate. Even with a PS4 Pro, the performance sits somewhere between 25-30 frames per second (unlike Bloodborne). With acute timing required for dodging and parrying, the downgrade in frame rate is really unfortunate. 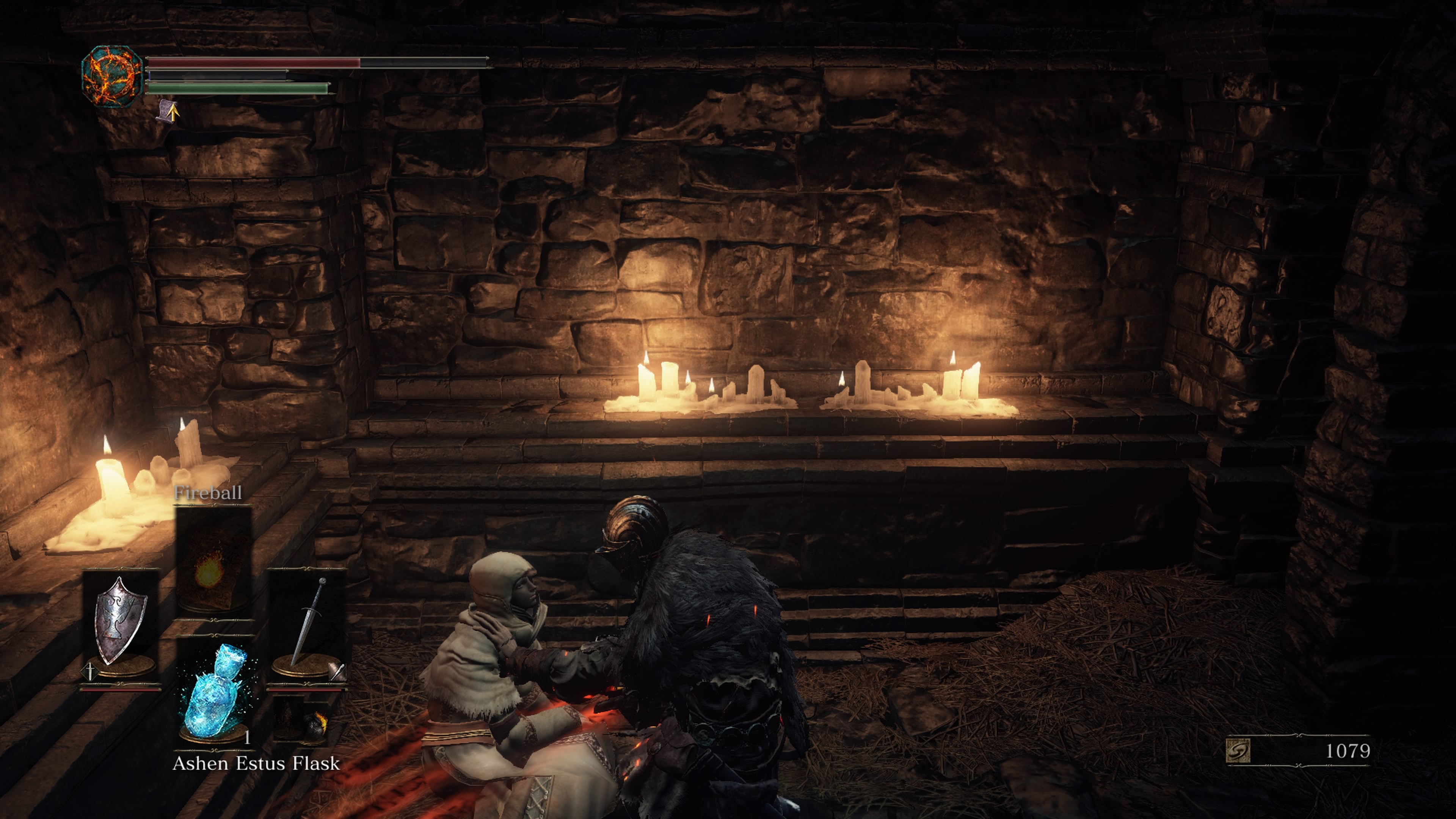 I love the ways you intimately interact with NPCs compared to past titles. I felt like I had a stronger and more invested role in the fates of everyone. Irina of Carim…I want to keep you safe, and let you down with a simple mistake. Is it strange to say I wish I could say that I’m sorry?

The world is tired and broken, partly telling the tales of its main cast of bosses—the Lords of Cinder—who abandoned their duty to carry on the First Flame out of fear, greed, spite, and other vices. If anything, the story makes you seriously consider whether it’s worth rekindling the fire to save a world that will one day become as dark as it is now. What is man’s destiny? To kindle the ash so its embers remain alit? Or to let them cool and blow away so the dark may come? Once again, the characters outside your own are the ones that pose these questions the most powerfully, and I’m happy to say interacting with NPCs is even better here. It’s almost like you go on unintentional, long side quests with them. Sometimes they trail off. Other times you see them to the end. Unexpected events like NPCs helping you in combat or seeing how others interact with each other in the hub world and outside areas is a treat. In a word, the investment feels more personal, and a bit of branching dialogue here and there is appreciated to enliven interactions.

I didn’t touch the online component as per usual, except when I had unwelcome invaders after restoring myself with Embers (akin to Humanity or Effigies). I like the concept of having new types of invaders that are ambiguous in whether they’ll help you or not, those that are automatically summoned to others’ worlds to combat malicious invaders, etc. However, I can’t be bothered with it. Though I did bother with the DLC and was underwhelmed by the level design in The Painted World of Ariandel. Areas are straightforward and lack surprises in the way of altering platforms and tricky traps that permeate the main fare. However, most of the bosses are insanely well done with more forms (and figures to fight at once, for that matter) than you’d expect. The Ringed City is the best out of the two DLCs with bosses that tested my limits and amazed me with their dazzling moves. They’ll test your patience as always, but there are some trilogy highlights to end the game on. 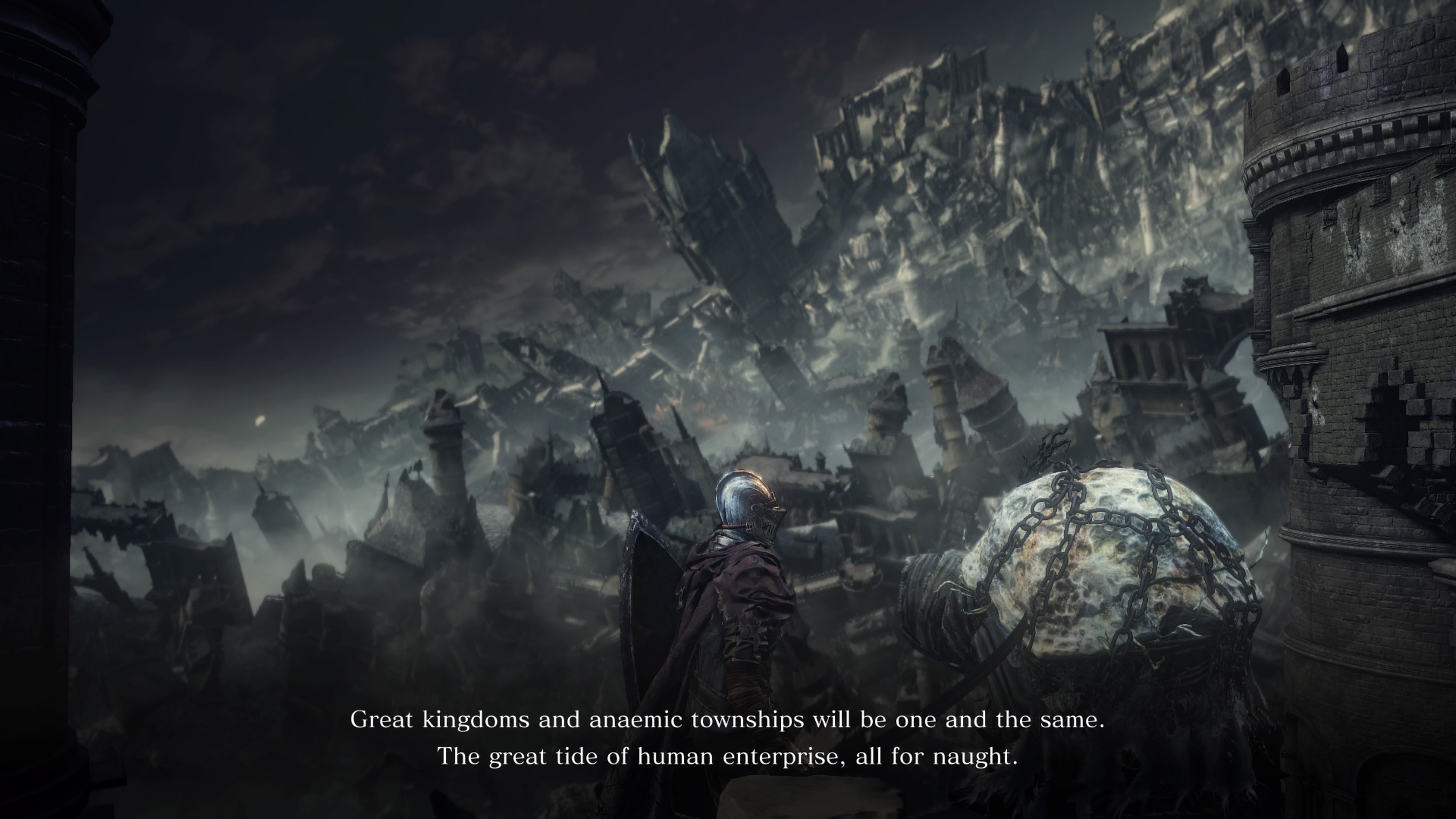 As always, Dark Souls is resplendent with some gold, thought-provoking dialogue. If I could talk with Miyazaki about his views and studies in philosophy and religion, I’d be one, happy Undead.

Dark Souls III demonstrates mature, restrained refinement with a deft handling of its systems, design, and controls. The same is reflected in its presentation and music that will catch your eyes and ears more than any other game. It may be bleak and dark, but it’s characterized by a dancing fire that has the series burn out rather than fade away.