This is my review for Resident Evil: Director’s Cut, which was originally published as a user blog post on Game Informer. 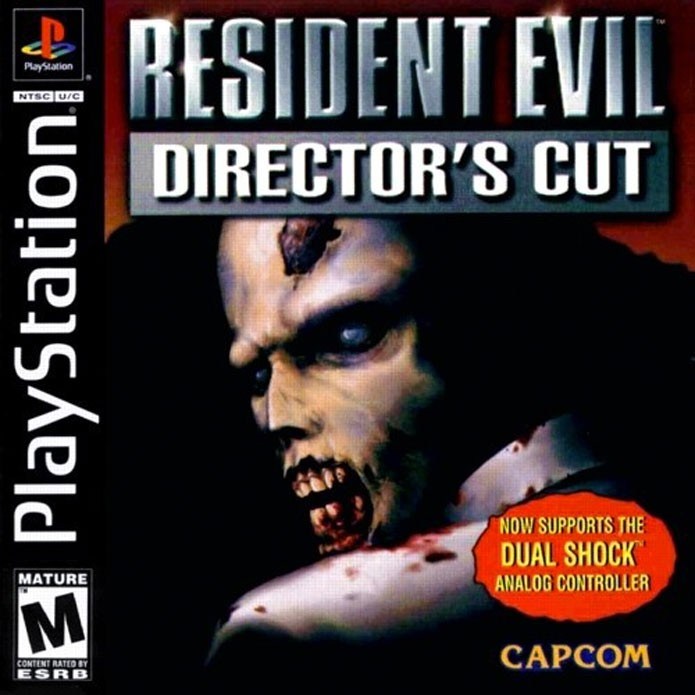 I can’t say I’ve played that many survival-horror games. Well, maybe Left 4 Dead and Nazi Zombies count, but they aren’t pure survival-horror like Resident Evil. I’ve always heard the games were fantastic, but I was never interested in the series. Since I never knew what the games were like, I tried out a RE5 demo about two years ago. I thought it was tedious and slow-paced. I shrugged off RE as an overrated series. However, I continually heard how groundbreaking the series was, especially RE4. I started thinking to myself, “what if the games are that good? Did I really give them a chance?” My Playstation Plus subscription has recently opened a glorious door to play the first three games for free. I immediately jumped on this deal and got right into the classic that started it all: The Director’s Cut. If I’m going to give the series another chance, I knew I would have to play the original. Over the course of a couple of weeks, I played the game frequently and finally finished it a couple of nights ago. I really liked it, so I’ve decided to write a small blog series chronicling my thoughts on RE 1 through 5 (no games like Code Veronica). For each game, I’ll be writing about my experience, what I liked and didn’t like about it, and so on (pretty much a review). I’m also going to be a little, uh, unique in how I grade the games. I’m going to rate them on a scale of five Jill sandwiches! Ha, I hope that doesn’t sound too weird. Just thought I’d be a little crazy. 😛 Okay, let’s begin the long tour through the famous Residence of Evil… 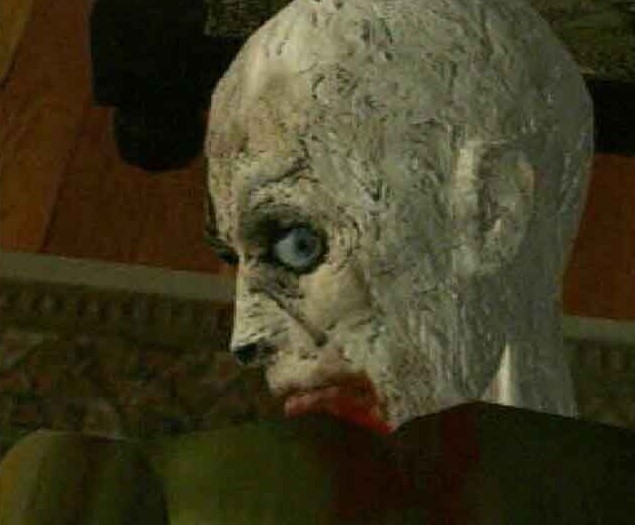 “Hey, would you happen to have any chapstick?”

I’m greeted with a live-action scene of a guy walking down a hall. He turns around, screams, and a fountain of blood flies toward me in a mock 3D effect. As I start a new game, I hear an evil deep voice say “RESIDENT…EVIL.” After this I’m asked to pick Chris Redfield or Jill Valentine as my character. I pick Chris. Now I witness another live-action cutscene that starts out explaining the mission. A couple of S.T.A.R.S (Special Tactics and Rescue Service) agents are sent to a helicopter crash site where fellow agents wrecked. Their mission was to investigate a hideout with a supposed group of people responsible for recent killings in Raccoon City. The wreckage is spotted, so the group (Chris, Jill, Wesker, and Barry) land near the site to investigate. But what is this? A strange dog ambushes the group! After running away from the creature, the group conveniently finds a huge mansion nearby and takes refuge in it. This turns out to be the place where the original team was supposed to go, so it seems as if their duty is now on this team. A second cutscene is shown, but it thankfully shows the true graphics. Considering the game came out in 1996, I am very impressed with the visuals. But the voice acting? Not at all. The characters all sound like they’re reading scripts in the most corny way possible. After I’m (Chris) told to search the mansion for Barry (he got lost in the confusion), I make my way through two rooms and turn a corner. A graphically better cutscene plays and shows a man eating one of the agents Chris and the others were originally searching for. The camera zooms in on his pale head, and the man turns around slowly to reveal a blood-stained face with no emotion. Even though this isn’t too scary, it freaked me out in my pitch black basement in the middle of the night. I ran back the way I came in a panic to find the rest of the group gone. I’m all alone in a huge mansion with cannibals…great.

To say the least, I was humored by the intro. The laughable scripts, live-action scene, and typical 1980s horror movie setting sure confirmed it was made in the 90s. The funny thing is is that the intro was so bad that it was awesome. I had to keep playing this corny horror game. 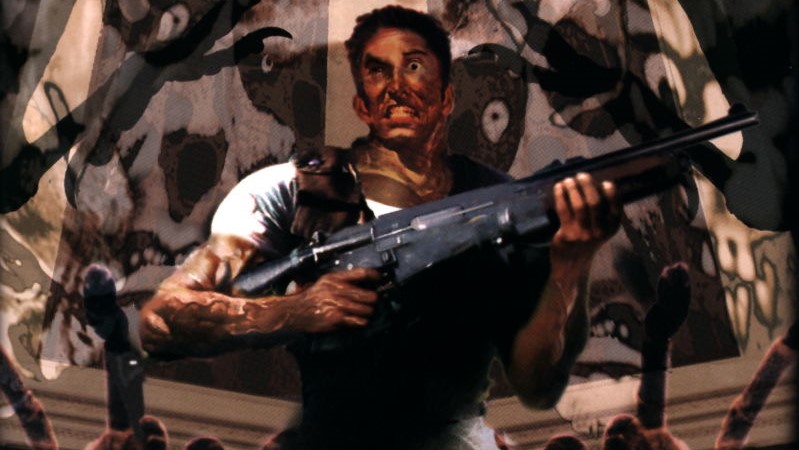 Ladies and gentlemen, this right here is a face of iron determination, fearless courage, and unparalleled handsomeness.

In regards to gameplay, the first couple of hours were boring. The running controls and camera seemed odd, all you had to do was walk around and get stuff, and..well, it just wasn’t fun. However, I began to understand and appreciate the way the game played over time. RE deserves to be called a survival-horror game because you have limited inventory, health, and ammo. Another aspect of the game is something I’ve never seen before: limited saves. You know how you get checkpoints in most games? In Director’s Cut, the only way you can save is by using a typewriter. I had to find ink ribbons throughout the game because I couldn’t save without one. The health and ammo also work like this. You can only have so many herbs (health) and ammo to go around. Throughout the game, I learned that every single item I had was important and could drastically change my situation. Some areas were too hard to get past without being attacked by zombies, so I had no choice but to use a weapon. However, if I could safely run past a zombie, I would risk being attacked to save my ammo for something more necessary. I’d venture to say the game is more about survival than horror. In addition to this awesome game mechanic, the way you basically progress in the game is to find items to unlock doors and gates to other areas. You also need items to acquire items (ITEMCEPTION…kind of). There are some minor puzzles and tricks on the side you have to figure out to advance, which diversified the gaming experience enough so that the running around and getting stuff didn’t become too repetitive. Overall, I’ve gotta say the gameplay was my favorite part of Director’s Cut. Every time I found ammo or health, I rejoiced in my luck. Whereas in most games, supplies aren’t even something to worry or give a second thought about. This was one of the first game experiences where I struggled to maintain a decent amount of health, ammo, and even “save items.”

Like I said earlier, the graphics are very good considering the game was made in 1996. The atmosphere and the detail to the environments look fantastic and complement the game’s tone very well. I was further impressed to find mirrors that actually showed my reflection, decently realistic lighting and shadow, etc. Even though the character models looked awkward when they moved around and constantly made overly emphatic hand gestures, I didn’t care. It just made them look all the more corny for my laughing pleasure.

The voice acting may be awful, but the music and sound effects are actually pretty good. The former is either eerie, epic, or cheerful depending on the circumstances. For example, when you walk in a safe room, you start to hear chimes and a welcoming melody. This works very well, because when you walk into a room (let’s say the safe room again), you sigh in relief and say, “Yes! I finally found a spot to gather my belongings and save!” The sound effects are realistic and surprisingly thorough. An example of this is a walkway that was mostly wood with a small metal part where I actually heard the clang of the metal for a split second as I ran across it. When you’re outside you hear the crickets and calming wind, the dragging feet and moaning of zombies, the shell of a shotgun bouncing across the ground, and so forth. Everything sounds crisp and clear. When a zombie dog is out of view, I immediately recognize the horrible snarling sound it emits. Speaking of the dogs, there was one little thing that bugged me to death; a sound byte of a dog howling that replays every two seconds when you’re outside the mansion. Ha, but other than that, awesome sound and music work. 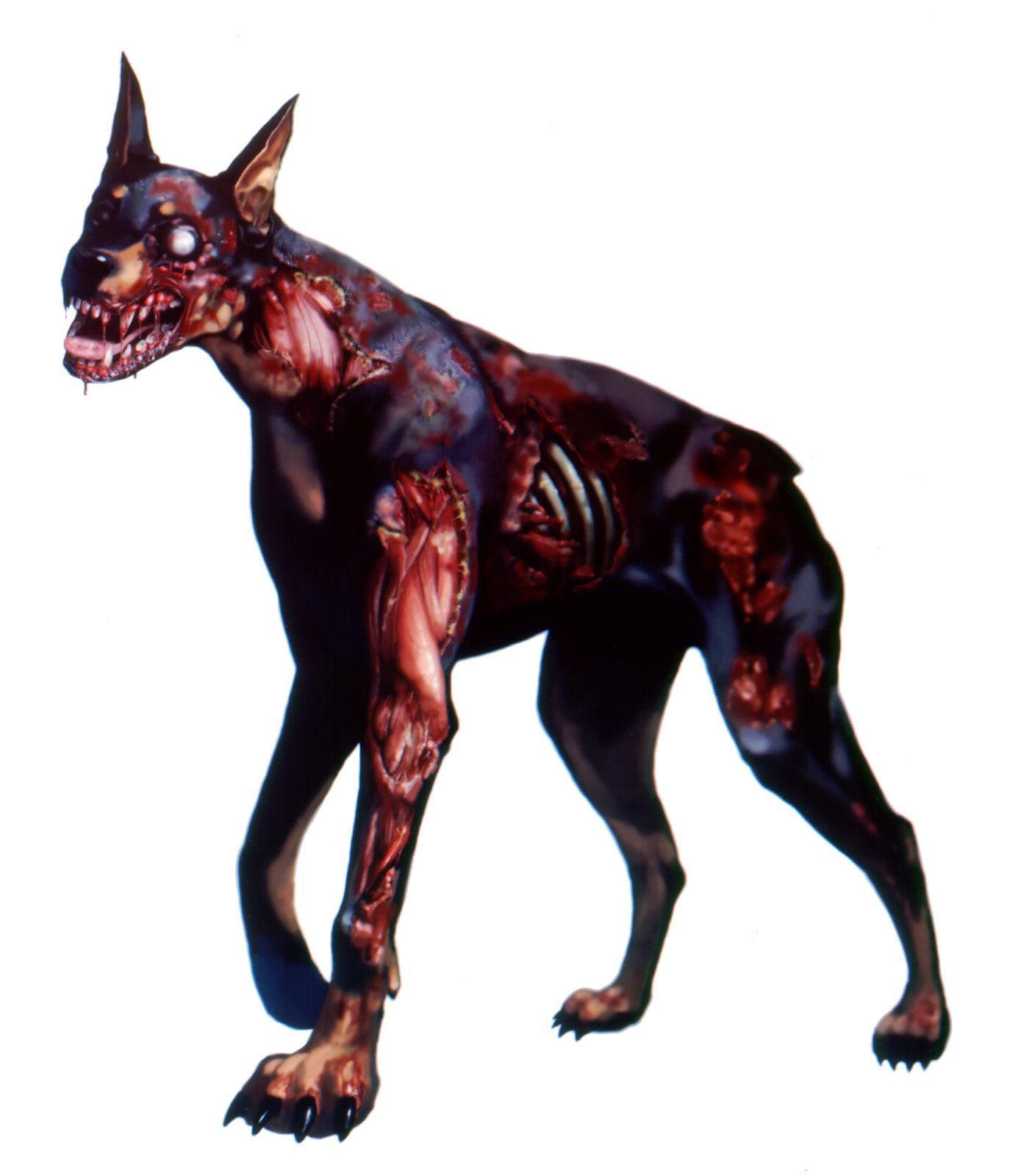 Come on, stop howling in pain. It’s JUST a scratch…

As I neared the end of the game, I was much more satisfied than I thought I’d end up being. The story has a lot of potential to be something deeper and more interesting in the future; the gameplay was something new to me and proved to be a fun challenge over time; the graphics (especially the environments) are great for an older game, and the music and sound effects made the experience more immersing and spine-chilling for me. In conclusion, I give RE: Director’s Cut…

I can’t wait to start playing RE2! In about a month, I should return with Part 2 (so many games and school, so little time). Thanks for taking the time to read this and I hope you’re looking forward to the next one. Until next time!