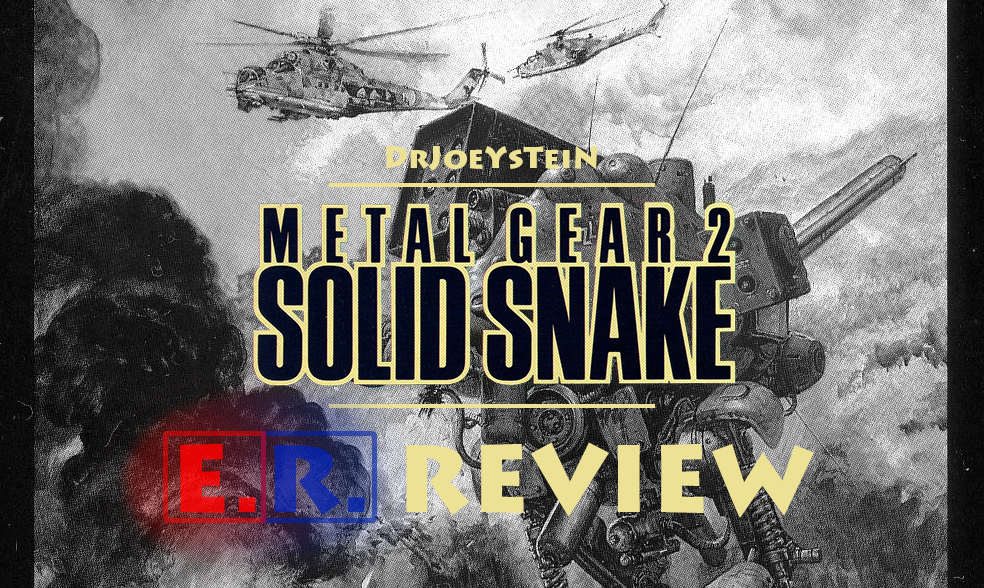 You know that amazing moment when something just clicks? If you’re a writer, it’s like when you’ve finally figured out the perfect points to bolster your article’s topic. If you’re an artist, it’s the moment when you’ve discovered another artist or a stylistic concept that will help guide and shape your work to greater heights. Whatever you might do, it’s simply that illuminating second where you shout “Eureka!” and realize that what you’ve just learned will be highly influential in improving your talents. It might just be the thing that makes you stand out from the crowd.

In particular, I believe Hideo Kojima had this sort of enlightenment after developing the first Metal Gear. It may have been a commendable attempt to redefine the stealth genre, but was held back by underwhelming design choices and a lacking narrative, graphics, etc. The sequel, Metal Gear 2: Solid Snake, is another story. It’s one of those rare cases where a follow-up takes everything about its predecessor to improve and add to its underlying potential. It’s a testimony to Kojima finding his groove and establishing his mark in the game industry from 1990 and beyond. 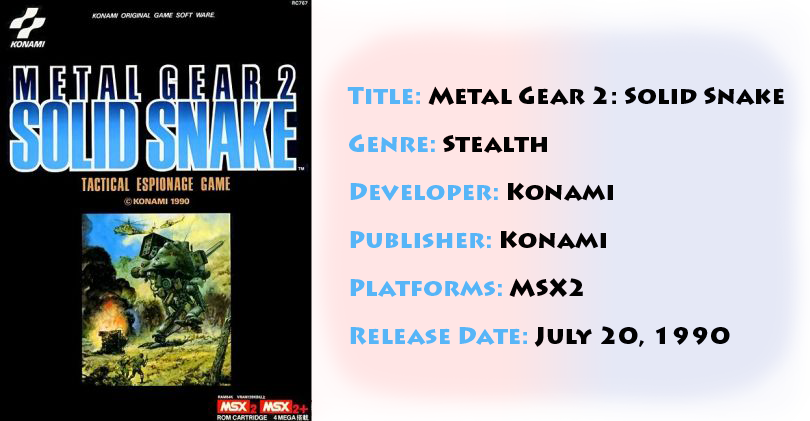 Solid Snake is back in the saddle to rescue a Czech scientist named Kio Marv after destroying Outer Heaven. This guy created a special, faux oil called OILIX from algae that he was going to present to the World Energy Conference, but ended up captured by agents from Zanzibar Land on his way there. With an oil shortage crisis going on, this military nation now has leverage against the entire world by controlling the supply of OILIX, and can do so since it stole nukes from other countries that were meant to be disabled. It’s a military nation that demands respect and forces everyone into its palm with a necessary commodity, which is what Solid Snake is tasked to stop by infiltrating Zanzibar Land, rescuing Dr. Marv, and more if necessary.

With this major exposition dump and much more dialogue to come, Metal Gear 2 is a far cry from the original in terms of story. Heroes and villains (new and old) have clear motivations, bonds are formed between Solid Snake and his partners, and the overall plot is relatively complex. I was honestly surprised by the amount of different responses you can get by using the Codec and some of the downtime moments where characters open up to Solid Snake about their past or reasons for doing something good or bad. You’re able to get a well-rounded idea of who everyone is, which contributes toward making some of the last boss fights and plot twists emotionally investing. Even the narrative waxes philosophical on brief occasions about the nature of war, soldiers, and loyalty. During all of this, you even catch the trappings of Solid Snake’s cool, suave demeanor that’s fleshed out in Metal Gear Solid. It’s one testimony out of a multitude to the characters and story being given better direction as a whole, and while some characters are still mostly means to ends like, say, the people you contact via Codec, they have distinct personalities and more believable lines! It was always Kojima’s goal to tell epic, sprawling tales through video games, and there’s no doubt that the groundwork for his franchise’s cinematic focus found its footing here with zeal. 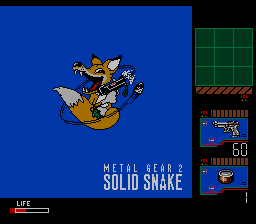 FOXHOUND preferred a far more amusing symbol to represent itself in 1999.

The top-down gameplay returns from Metal Gear as you explore an open world while either taking on or sneaking past enemies. You’ve got a host of equipment and weaponry to equip from your separated inventories, which will help you defeat bosses, access new areas, and find other helpful items. What’s changed the most is that this title feels more like “tactical espionage action.” Stealth is preferable since the added mechanic of crouching and crawling does wonders for the level design with bits of verticality, since you can go through ducts, under beds, or sneak beside elevated platforms. The addition of a radar that displays enemy movement and the general layout of a location is greatly appreciated since enemies who are off-screen can no longer surprise you, and you’ll need this since Zanzibar Land’s soldiers are the best of the best. They can hear you when you step on particular types of ground (which makes crawling all the more useful), have a greater field of vision than Outer Heaven’s soldiers, and can patrol beyond a single area. This greater difficulty of avoiding being detected combined with the help of the radar, crawl mechanic, and some new stealth-oriented items put the fun in and emphasis on stealth. Instead of the frustrating balance that existed in Metal Gear where sneaking felt more like a waiting chore than a good challenge, it’s rewarding and feels like the right thing to do in the sequel. 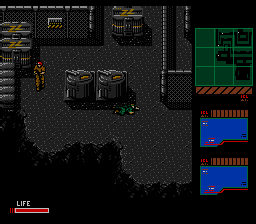 This is how you do stealth. Who needs boxes, right? Okay, you still need the box.

Action can be just as intense as it was before if you’re detected by enemies or surveillance. While it can be a pain to hit enemies as they randomly move about trying to get a fix on you, this frustration is more acceptable since stealth feels like the appropriate alternative, whereas I found it to be a pointless nuisance to maintain last time around. Improvements to inventory management (like being able to combine up to three key cards into one) and a wider selection of weaponry and devices for both stealth and action are worth mentioning as well, but what’s really important to highlight is that the ways in which you solve puzzles and defeat bosses is more cerebral. You rely more on common sense and ingenuity than sheer luck. What I mean is that puzzles in Metal Gear were either one-dimensional or annoyingly vague, resulting in two extremes of breezing by some bland brainteasers or needing a walkthrough. Metal Gear 2 doesn’t suffer from this, and it may have sections where I had to break out a guide to solve something that wasn’t obvious, but I blame that more on myself for being lazy and not using the Codec for hints.

All that to say the puzzles strike a point where they are neither ridiculous nor too easy, but hit the right spot of being clever enough to impress you. Circumstantial items, key dialogue, and environmental curiosities will make you smile when you crack their use to progress, making the world itself feel more alive with a great diversity of puzzles to tackle with varying locales. Even the layout of everything feels more cohesive and logical with the two, main buildings’ numerous floors and the natural landscapes that lie between them both. Backtracking can become a bit overwhelming and tedious with some objectives, but that feeling of mentally putting together this unfamiliar world through adventurous exploration is stronger than ever. 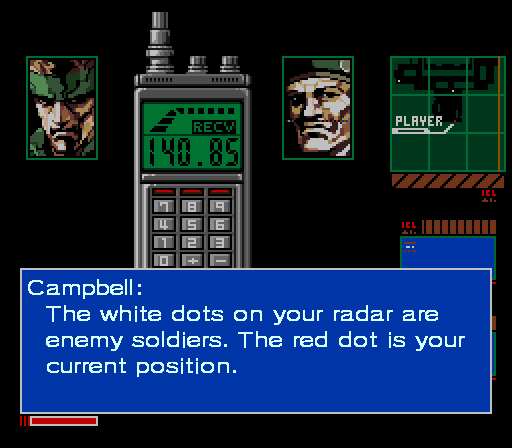 My praise keep on coming with the audio, which benefits from a greater range of sound effects and music that are indebted to the varied environments. Expect to hear a bunch of tracks on a frequent basis, which are – melodically and compositionally speaking – more memorable and advanced than the small, simple soundtrack of Metal Gear. The same goes for the graphics, which are a massive improvement over the dull pixelated art of yesteryear. A brighter palette of colors and more detailed sprites ensure that the scenery doesn’t become tiresome after several hours.

Indeed, you’ll be spending a good two or three more hours on this second outing of Solid Snake, meaning that it will take you around six to eight hours to complete. It’s a well-rounded experience that doesn’t miss a beat or falter in its pacing, and while there isn’t an extra mode you unlock at the end of the first game, where you can go up against all of the bosses in a row, this is needless since the sequel’s solo endeavor exceeds expectations in every which way.

Metal Gear 2: Solid Snake is everything the first game should have been by confidently stepping into its intended identity as a smart, stealth game that does its genre justice. You’re invited to cautiously roam about an unfamiliar world that grabs you with its thoughtful puzzles and exciting encounters. All I really need to say is that it plays, looks, and sounds better than the first game with a deeper narrative and characters to boot. It’s the game that surpassed the literal Metal Gear, marking when Kojima solidified his game design philosophy for his beloved series with skillful tact. 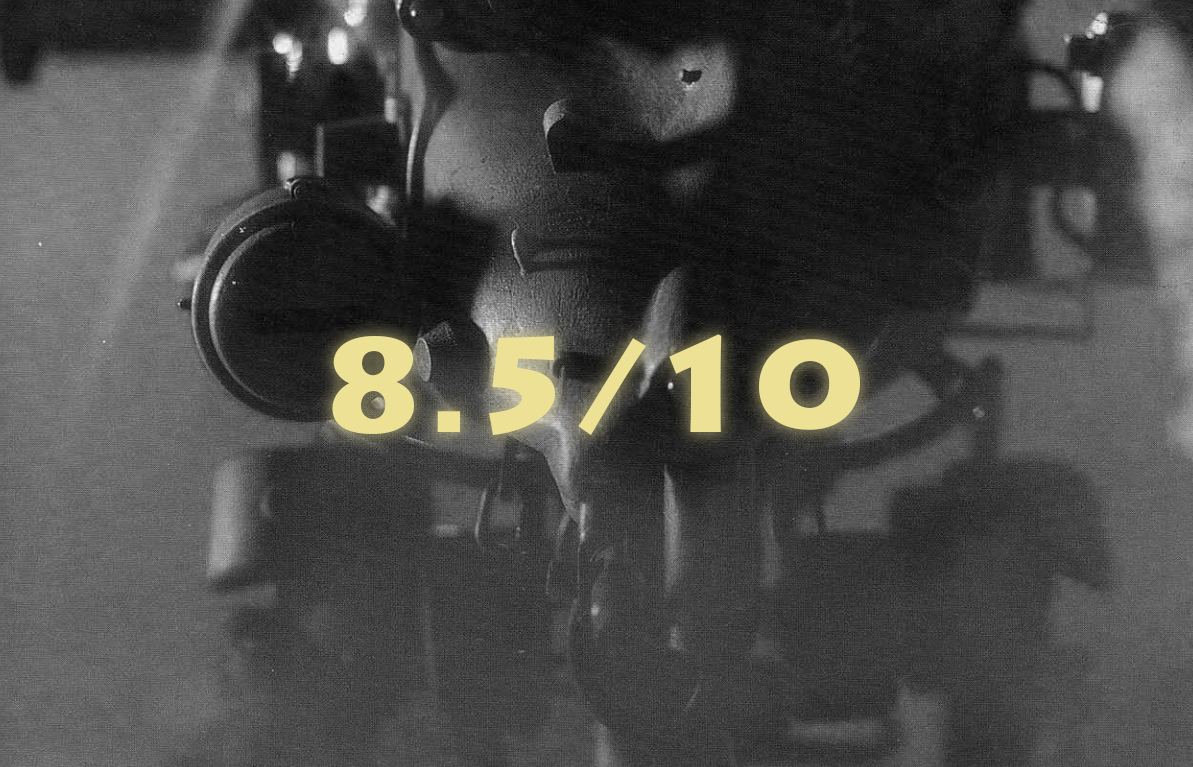 The pictures taken directly from Metal Gear 2: Solid Snake are courtesy of Ray Hardgrit over at the Super Adventures in Gaming blog. You can check out his post (with some of the only good screenshots of the game on the internet!) by clicking here. Other than this, all other pictures are from promotional material of the game and contain my own edits.