This is my review for Resident Evil 3: Nemesis, which was originally published as a user blog post on Game Informer. 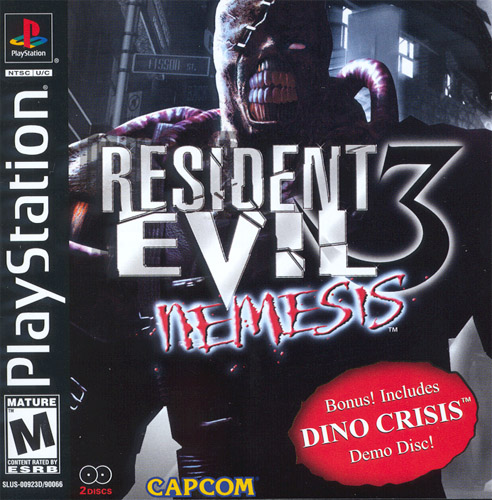 Ladies and gentlemen, the wonderful reality of having more time to play video games is finally here because of the long-awaited arrival of summer. Although this is not the case for some people, I’m assuming that a majority of you all get to experience this. The reason why I bring this up is that I have been able to start tackling my gaming backlog and other games that I’m deciding to play as summer goes on. In the case of Resident Evil, it’s been a commitment of mine to play through all the main games since last year in October. I’ve neglected this in the past few months because of school, but now I’m back on track and plan on finishing “Entering Resident Evil” as early as the latter half of next month. As you can see, Part 3 will cover RE3: Nemesis. There are many similarities between RE2 and this one. Therefore, I will mainly be covering the differences in this game and how it improved upon its predecessor. For a backstory on the main elements of the RE games, I recommend looking through Part 1 or 2 if you aren’t familiar with the series. Anyway, it’s time to continue the journey through this Residence of Evil as we find ourselves right in the middle of it.

It’s back to the devastated streets of Raccoon City once again as the S.T.A.R.S. agent named Jill Valentine. The story begins in her apartment room where she is trapped because of the infected population of the city. However, she is highly trained, ready to take down the Umbrella Corporation, and primed to evacuate the city. The first steps out into the “wild” prove to be manageable for her until she bumps into Brad (a fellow S.T.A.R.S. agent) in a drinking pub. He warns her that someone is coming to take them down, but runs away in fear before giving her any more information. With no reason to stay, Jill continues her trek through the congested streets and eventually arrives at the R.C.P.D. (Raccoon City Police Department). As she opens the gates and prepares to walk inside the building, Brad unexpectedly limps towards her from behind while desperately calling out her name. Just as she is about to assist him, a hideous monster slams into the ground between them and grabs Brad by the face. It quickly ends his terror by piercing his head with a ghastly-looking tentacle. The monster then turns around its hulking, mass, stares at Jill with its disfigured face, and firmly whispers “S.T.A.R.S.” Brad’s not the only one this monster is after.

It’ll suffice to say that from the very beginning there are noticeable changes to some aspects of RE, which are specifically the gameplay, cutscenes, and voice acting. I normally don’t work out my verdict until the end, but I could already tell that this would end up being another awesome game. 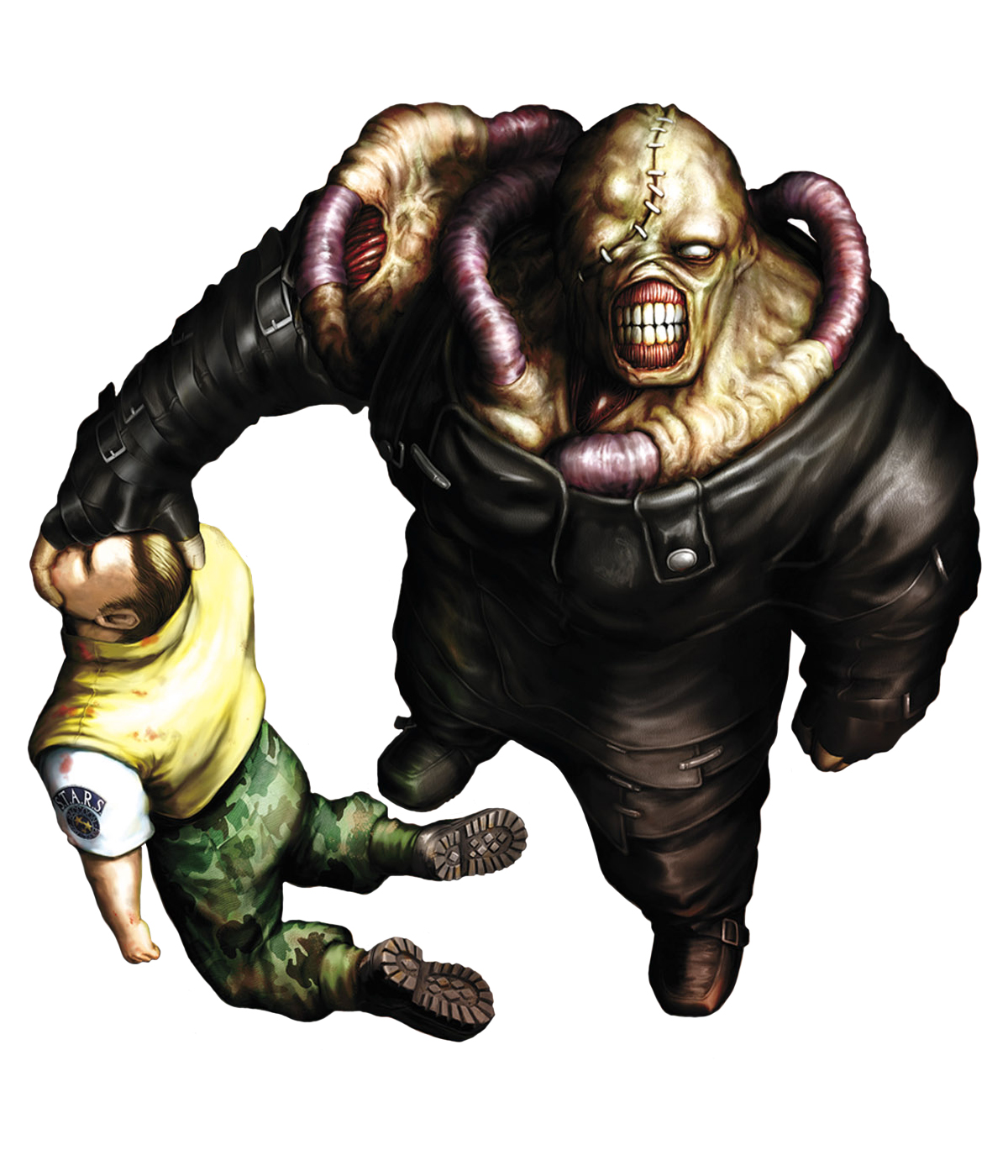 Let’s take another close-up look at this monster called Nemesis…yep, I think one look is enough too.

All of the main parts of the gameplay remain intact with some tweaks to the controls, a new twist to acquiring ammo, and a choice system that slightly changes the situations and outcomes of the story. The “tank” controls are exactly the same as they were in RE2 with newly added options of being able to dodge or push enemies that get too close for comfort. If you were cornered in RE2, there was nothing you could do except pray and shoot; it’s awesome that RE3 gives you a better opportunity at saving yourself from certain doom. You’d think this would make the game easier, but this isn’t the case. This is the hardest RE I’ve played so far mainly because Nemesis is a randomly spawning enemy that can run faster than you, kill you quickly, and is just flat-out scary. Another contributing factor are the necessities of specific ammo and herbs that are extremely important because if you don’t save enough, you will literally have to start the whole game over again (I learned the hard way). Speaking of which, RE3 doesn’t have basic ammo for you to pick up this time. Gun powder can be found that’s a new and in-depth way for you to choose what ammo you desire. You have two powder types called A and B that are the foundation for all sorts of combination. For example, you could combine A and B to create C powder. If you do this two more times you’ll end up with three sets of C powder that can be combined to create Magnum bullets. There are over many different ways to go about mixing gun powders; it’s cool to have some freedom in being able choose what you need to survive. Finally, there is the choice system. It’s a shortly timed screen that periodically flashes up during the game with two options that change the outcome of a given situation. Since I’ve already given a short excerpt of the story’s beginning, let’s continue where I left off. Nemesis just killed Brad and it’s approaching you now. Time suddenly slows down and you are given the choice of escaping or fighting Nemesis. Escaping ends up saving your behind, but if you’re a skilled and daring player, fighting and (hopefully) defeating Nemesis gets you a special prize that could immensely help you. Overall, I really loved this because it kept me on edge to be ready to choose the wisest course of action as I saw fit. All of these new features keep the formula of RE familiar while adding small, but entertaining ways to keep it fresh. 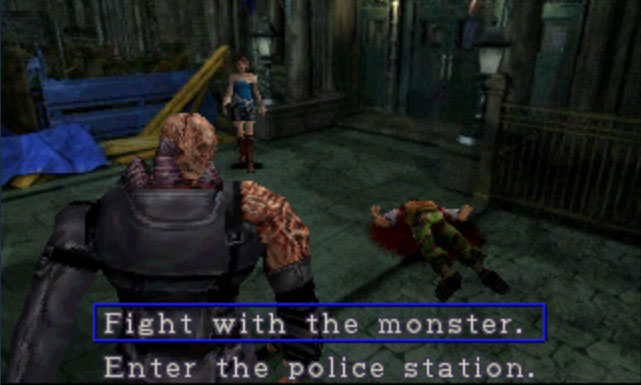 Since this game came out just a year after RE2 and is practically in the same setting, there are very minimal differences between both games in terms of graphics. Yes, the cinematic cutscenes are much better and more detailed than RE2’s, but there’s literally no difference in-game. Now, don’t get the idea that this is a bad thing! The graphics are extremely good for a 1999 game release. The diverse environments have great textures and layouts, the better-looking character models move more naturally than RE1’s, and cool environmental effects like the glow of a fire permeating the dark, damp streets adds a sense of realism.

The audio shines even more than it did since the dawn of RE, and I still can’t get over on how minute the details are in the sound effects. There are many different types of footstep sounds, echoing in cave-like structures, fire softly crackling, the hum of computer machinery, and so much more. The music is also great as always. Some songs have been remastered for this game, but a lot of original songs make their way in as well. Each song fits its intended role for increasing the emotions tied to a specific scenario, such as relief in a safe room is intensified by the sound of a piano melody. Or the feeling of panic while Nemesis is chasing you is enhanced by the quickened tempo of assorted instruments and cymbals clashing. And guess what else? The voice acting has finally improved! Although it isn’t up to my standards, I can tell Capcom must have been listening back in the late 1990s when everyone complained about it. It’s good to see progress advance in this audio category with voice actors that were willing to put a bit more personality and emotion in their roles than the past games’ voice actors.

RE2 had an enticing reason to replay the game with more insight to the story from another character’s perspective and some minigames. Strangely enough, RE3 is the first to get rid of this. It’s a single story with slightly altered story elements that don’t overly affect the ending. This decreases the replay value of the game for me, but others might find its extra features worth a look. Your first completion of the game unlocks a minigame where you race against the clock across Raccoon City to get to a checkpoint. You have a couple of characters to choose from with unique loadouts. As you progress through the streets, killing zombies and saving civilians are ways to extend your time that affect your grade once the course is completed. In addition to this, several playthroughs of the story unlock special cards that reveal new information on characters from RE2 and continue the story of characters from RE3. Although not as tempting to play as RE2’s additional campaign, it’s definitely worth a look.

In conclusion, RE3 proves once again that the series gets better and better, step by step. New additions to the gameplay, better cinematic cutscenes, and more professional (but still not the best) voice acting indicate forward movement that continuously impresses me. It’s no wonder why RE is the king of the survival-horror genre with its intriguing story, fun gameplay, and attention to detail in several areas. I give Resident Evil 3: Nemesis…

Thanks for checking out my latest review! I noticed that my blog series lost some steam ever since October…but hey, that was my fault for neglecting my readers. This is why I got something big planned for my final post. I’m going to write up my RE4 and RE5 reviews in the Reviews section and link them into a single blog post. And to make the blog post itself more exciting, I’m going to write an opinion of RE as a whole. It’ll be based on my experience of playing all of the main games (1 through 5). It’s very exciting for me; I hope you’ll keep your eye out for it as well. In the meantime, I would absolutely love some feedback on my blog series so far. Have I left any important info out you’d like to know? Do you like the current layout of my posts? Some constructive criticism would help me a lot in the comments below because I want everyone that has ever been interested in RE to read these posts and hopefully be encouraged to play the games. Anyway, I’ll be back with my final blog post before you know it because, well, RE4 is absolutely outstanding so far (uh oh, spoilers for my next review! Ha ha). Until next time!