This is my review for Resistance 3, which was published as a User Review on Game Informer. 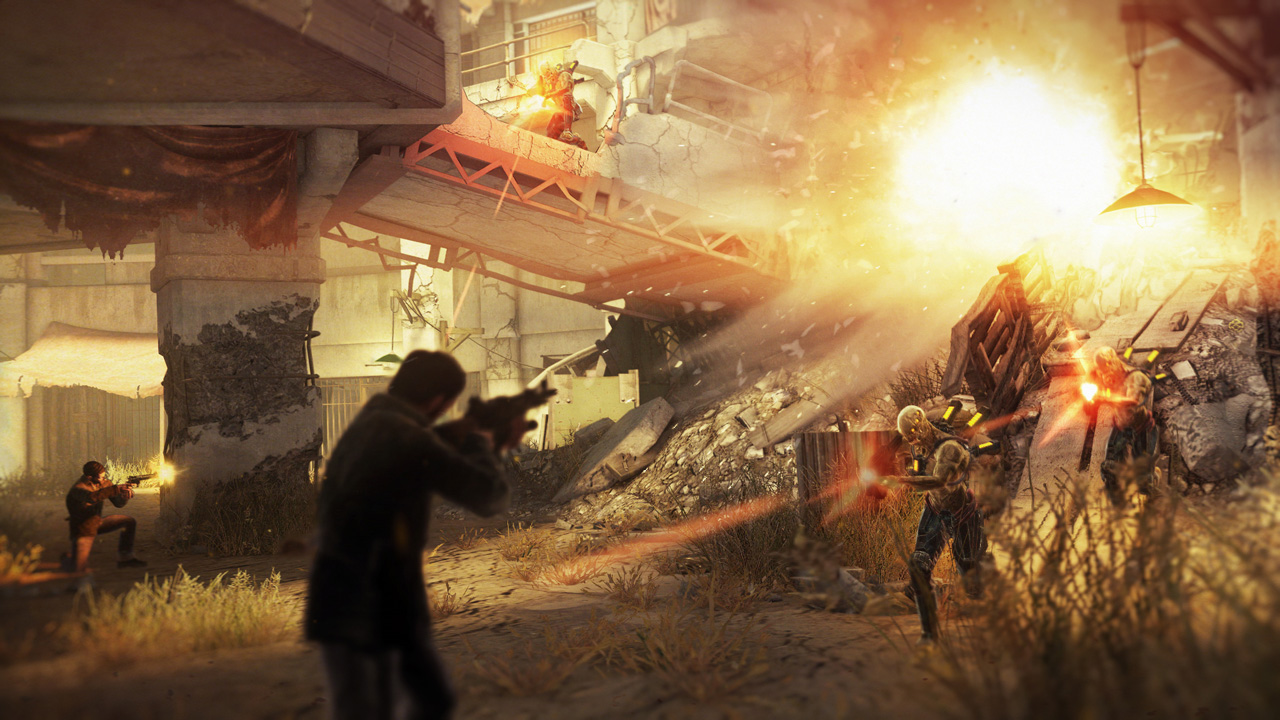 In 2006, one of the launch titles for the PS3 was a sci-fi FPS called Resistance: Fall of Man (developed by Insomniac Games). Out of all the launch titles, this game garnered the most praise and is considered by many to be one of the PS3’s greatest games. Two years later, a sequel was released. Improved graphics, a better campaign, fun co-op, and sixty player multiplayer matches made it a worthy successor to the original. Now-after three years of development time-Resistance 3 has finally arrived. This long wait was due to Insomniac taking an extra year to polish, fine-tune, and perfect their game. Is their hard work evident? Has R3 been strengthened and fortified to fend off the FPS competition? Or has it returned to the FPS battlefield unprepared and not fit to win?

In an apocalyptic setting during the middle of the 20th century, the aliens known as the Chimera have decimated the world from east to west. Their quest for world domination is complete, and now they plan for something even more sinister that’s shrouded in mystery. But humanity hasn’t given up the fight yet. Located in Oklahoma in an abandoned town is a man named Joseph Capelli (your character), along with his wife, son, and other survivors. Shortly after being introduced to the harsh circumstances of the cruel world these people inhabit, a small Chimera patrol uncovers the town’s obscure location, but Capelli is able to gather a group of guys to defeat them all. How on earth did the Chimera find them? Capelli discovers a man accidentally led them there, and his name is Malikov: a Russian scientist that studies the Chimera. He has been searching for Capelli for years to tell him that there’s not much time; the world will slowly freeze over and wipe out the rest of humanity. However, he says he’s found a way to stop this. If they were to destroy a tower in New York that regulates the temperature of the world, the weather would return to normal and the Chimera would slowly overheat and die. Of course, this is pure insanity to Capelli, but his wife says that if there’s any chance to give their son a better life, he should take it…and he does.

In the opening scene I am introduced to Insomniac’s vision of an alien invaded world. Ominous and sad music plays in the background as I observe a world of struggling and torment where surviving seems like a hopeless effort. As I walk down hastily made tunnels under the Oklahoman town, they open up into larger areas where people congregate. Everyone’s wearing ragged clothes, some are performing menial tasks, adults are playing with children, and poor souls are sleeping in corners with bandaged appendages. Every person I speak to in this dreary place sounds and looks like they’re trying to suppress their fear and hopelessness with a mask of optimism and cheerfulness. In all of this, it makes you think about Capelli’s position. Why is he fighting back against a seemingly unstoppable force? He’s not continuing to live just to shoot aliens with an aimless purpose. You find out that he’s living and breathing for two people: his wife and son. This personal motive Capelli has and the depressing atmosphere gives the perfect illusion of what it’s like to live in the Resistance universe. Insomniac nailed it this time. Unlike past characters of Resistance, I actually somewhat care about the characters in R3. Better voice acting and a little more personality make them more believable and naturally human. In this aspect of the game, I immediately think of the TV series “The Walking Dead.” The emotional impact the game and the TV series has on you is very  similar in a good way. Okay, this is only the weight and extra goodies behind the story. What about the story itself? It’s very straight forward and simple: get to New York and destroy the Chimeran tower. As you progress through the campaign, secret journals and plot points create more questions than I’ve ever had in Resistance. I really liked where the game was going as I got closer to the end because I was expecting a lot of answers and a twist/surprise to make Resistance 3 go out with a thunderous bang. To my horrified surprise, the end gave me no answers, no surprises, and no satisfaction. Since this was Insomniac’s last game, I’ll just say that they really ended the story…completely.

Since Resistance is known for pretty nice graphics, R3 should be comparable to its PS3 exclusive brethren like Killzone 3 and Uncharted 2. The graphics aren’t quite as good as these two games, but they come pretty close. Lighting and weather effects have been drastically improved as well as the overall look of R3. Everything looks and runs more smoothly than the first two games, character models look massively better and their facial animations evoke more emotion this time around. I also love the weapons of R3, which look absolutely sexy (you heard me right, they’re sexy). Popular weapons like the Bullseye and Auger have been – in terms of design – simplified and look more realistic (if they were real). They’ve also been redesigned in terms of sound, and now the weapons sound even better and much more powerful. Anyway, despite the impressive graphics, I was a little disappointed in the diversity of environments to explore. Most levels were bleak, brown, foggy, and dark…not too exciting. But hey, this is probably what an alien invaded world would look like; it’s still fantastic the way it is. To sum this up, the graphics are-by far-the best in the series, but are just under the quality of Killzone 3 and Uncharted 2.

Insomniac went back to their roots in R3 by bringing back a couple of things from R1. A health circle that displays the percentage of your health has replaced the regeneration method in R2, so you must acquire health packs to heal. Instead of carrying only two weapons…’glares hatefully at Insomniac’…you can carry every weapon in the game (yes, the weapon wheel is back)! In addition to these great, classic features, an awesome weapon upgrade system has been put into R3. For example, let’s say I’m using a new weapon like the Deadeye (a Chimeran sniper rifle). After I deal a certain amount of damage to enemies with this weapon, it will be improved with a scope that displays squares around my enemies’ heads, which makes it easier for me to kill them more effectively and efficiently. Playing around with other new weapons like the Mutator and Cyrogun is a lot of fun because seeing what these weapons can do and what kind of upgrades they get is exciting and intriguing. Man, what can make the fun factor of R3 even higher? A tight, refined control scheme. To satisfy the average FPS gamer, the melee and sprint buttons have been mapped to R3 and L3, respectively. The controls are like a knife cutting through butter, and this makes killing the Chimera a dream come true…but this bliss comes at a cost. The AI isn’t much different than R2’s, but the good thing is enemies don’t lock on to you like an aimbot. This annoyance is replaced with another problem. Enemies are slower and occasionally dumb. I’ve played on normal in every Resistance, and I felt as if I were playing on easy in R3. In one battle the Chimera were fighting a feral Widowmaker and took almost no notice of me. I just walked up behind them and killed them all in a jiffy with no problems. I guess Insomniac turned the notch for difficulty and AI intelligence down a little too much. I would definitely recommend playing on hard for a better experience. For example, in one sequence of the campaign I was on a train that was being chased by enemies, so I had to defend it. I killed one enemy after another as dozens tried to board, but it was so easy that it wasn’t as fun as it should have been. The level was awesome (as well as the rest of the game’s missions), but the difficulty of it on normal lowered the excitement. The good thing is that you can have a good, first impression by playing on hard. This is why I’m going through the game again on that difficulty (or even superhuman) so I can have a more fun experience. Besides the complaints, R3 controls like heaven and brings back key components of R1 that make this the most fun Resistance ever.

As is any FPS these days, the multiplayer is a big proponent of this game. If you’re a fan of the genre, I bet you’re looking for a change of pace from an FPS like Call of Duty. If so, R3’s multiplayer is nothing different or new. But if you don’t care about it being different and just want to have a good time, it might be right for you. Here’s a quick breakdown. You have several game types to choose from, like Team Deathmatch and Chain Reaction (which is like CoD: World at War’s “War” mode). The maps you’ll be playing on are varied and all over the world, which is pretty cool because you’re able to see what other countries devastated by the Chimera look like. As you play you can earn killstreaks, like a shield or the powerful Auger. Once you level up you’ll receive Skill Points, which works like a currency system. You can then spend those points to purchase or upgrade guns, grenades, or perks. As you continue to level up, you can make your own custom classes, earn character skins, and put titles next to your name. That’s basically it. The whole system isn’t that deep or rewarding to keep me coming back, but this is only my opinion. The multiplayer ends up being a mixed bag. It’s very good, but it isn’t anything I haven’t seen or played already. So how long will it last you? I’ll probably play it for about 10-15 hours, but it varies from person to person. While I’m on this subject, I should definitely talk about the campaign’s length since I never mentioned how long it is. Sadly, it lasted me about 6 hours on normal. This was a significant disappointment in R3 for me to be honest. I was expecting at least an 8 hour campaign like R1 and R2, but that’s not the case here. The campaigns are the biggest part of Resistance for me and are the main reason why I love the games. With three years in development time, I was expecting much more from R3’s campaign than I got.

What’s R3 in a nutshell? It has an excellent campaign, despite the disappointing length and ending. Classic elements from R1 are back, the controls have been tweaked to perfection, and new additions to gameplay are excellent. The graphics, sound effects, and music are easily the best in the series and complement the tone of the game very well. The multiplayer might not do anything new or different, but it is still really good. Do these things make R3 worth the wait and your time? Yes, of course. R3 is something you should embrace…not resist. Even though the game could have easily been made in two years and didn’t meet all of my expectations, R3 is still an awesome game. You should definitely join up to fight the Chimera and be a part of the Resistance at some point.