Spyro 2: Ripto’s Rage! is the one. That’s where my interest in gaming started alongside the first Crash Bandicoot. I had to go back and play Spyro the Dragon before I moved on to Spyro: Year of the Dragon. I had good memories of the former and forgot much of the latter, but the one in the middle stuck with me. If anyone asks me what my top ten favorite games are (or the most influential ones on my life), I never fail to mention Spyro 2. Sadly enough, I haven’t replayed it since my childhood. The Reignited Trilogy gives me the chance to see if it stands up to the lofty praise I’ve heaped on it for most of my life. For what it is? It most certainly does. 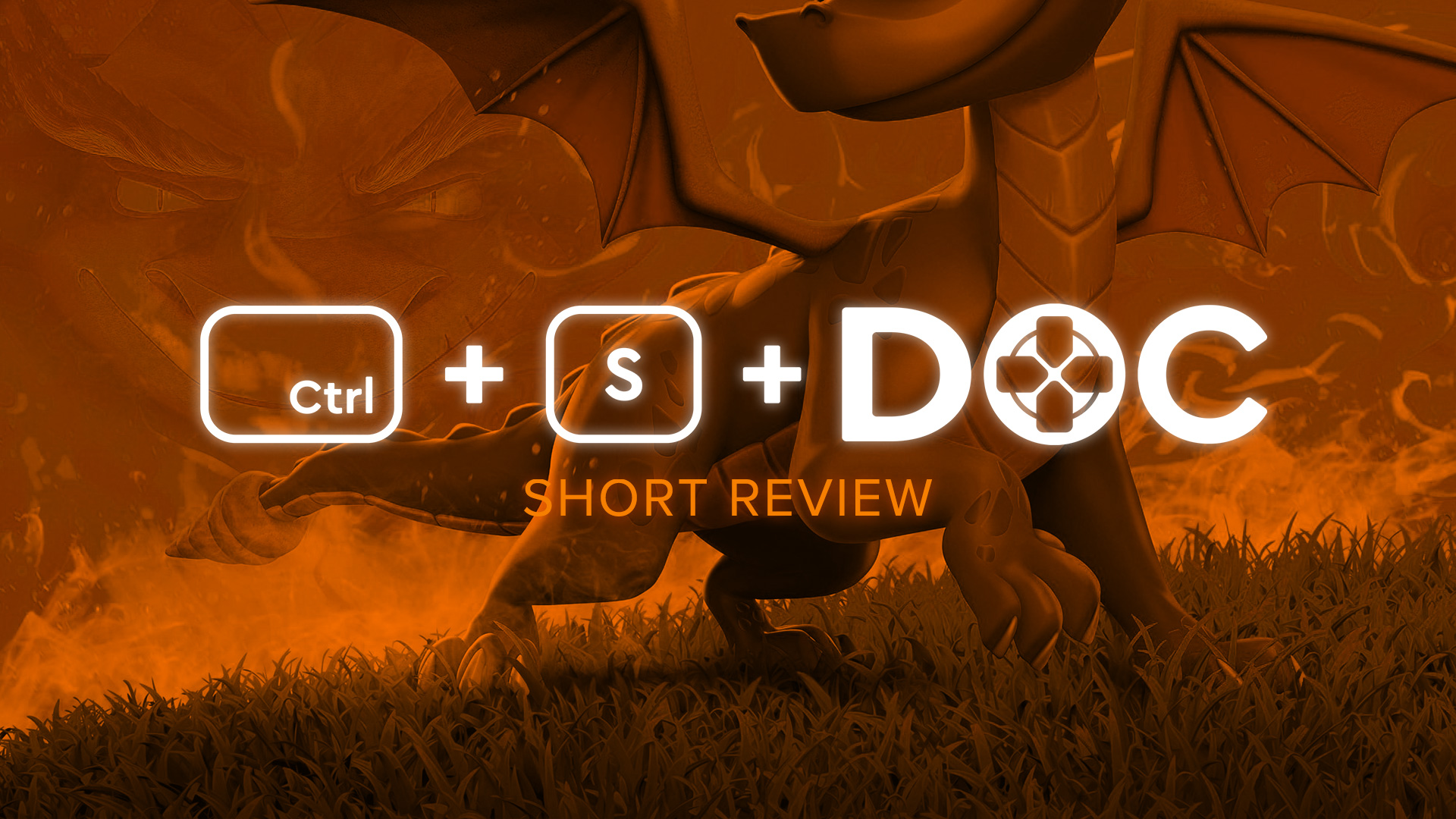 There aren’t any true side characters in the first game. Sure, you have dozens of dragon dads to save along the way, but they’re not characters who stick with the purple runt on his journey to toast Gnasty Gnorc. They could be reduced to fun trophies with personality. However, the sequel has a broader yet more focused cast. It starts sometime after the first title with Spyro planning a vacation to Dragon Shores on a rainy day. Folks from the far-off land of Avalar inadvertently made other plans for him by tweaking one of their portals to bring a dragon there. The reason why is that a scrawny dinosaur of sorts named Ripto has taken over Avalar with the much-needed help of his big, dino companions and a magical staff. The spunky fawn, Elora, the outgoing tiger, Hunter, and the smart mole, the Professor, all plead for Spyro’s help to make Avalar free again from Ripto’s rage. The dragon can’t seem to catch a break as he sets off on a more action-packed vacation than he had in mind.

Like older platformers and arcade games, Spyro the Dragon has a basic premise with little meat in between the beginning and end that resembled a story. There are no character arcs, plot developments, or backstory like in Super Mario Bros., Crash Bandicoot, or the first The Legend of Zelda. It was more about gameplay, but with the visual creativity of Insomniac Games, having a straightforward series of levels with a piece-meal story was being squandered with so much material. As if in response, the sequel has more heart and impact. There are several cutscenes demonstrating the evolving friendship between Spyro and his new friends, how Ripto came to power with a flashback, and the growing frustration and desperation of said villain. There are even small, cheeky cutscenes that play at the start and end of every level, respectively giving context to how individual worlds came under control by its enemies and showing the humorous revenge denizens enact after Spyro saves the day. The same enemy interaction and environmental detail are still present to enliven the world, but a slew of charming dialogue for friendly NPCs in each world does wonders to invoke history and cohesion to Avatar. I chuckled when I realized how Spyro wound up helping both sides of these warring civilizations in two separate levels. You’ll also see similar species in different levels with both sides calling each other out from time to time with visual signposts and snippets of lines. Other cute references are spread throughout levels, and Avalar feels significantly more lived-in and interconnected than the first game’s worlds.

One thing I noticed about cutscenes is that the textures look like they’re in a lower resolution. They’re a bit muddy? Blurry? I’m not sure if it’s just me, but it has no impact on the fluidity of the animation. Also, Elora’s redesign is life.

As for the hub worlds, what made Spyro the Dragon unique from other games was that its hub worlds were like levels unto themselves, filled with enemies, gems, dragons, and secrets to find. Spyro 2 continues this staple with three of my most beloved hub worlds in all of videogames. Enemies have been removed with the tradeoff of bigger spaces and better secrets to uncover. Alongside Stewart Copeland’s chilling ambient music (I think his overall score here is his best work), these hub worlds are akin to the tranquil playground of Princess Peach’s castle in Super Mario 64. There aren’t many titles I’d just roam around in aimlessly, but Spyro 2? It’s like a whimsical daydream; a safe place to wander and rest in peaceful respite. It speaks for the game’s outstanding art direction, which is helped along by Toys for Bob’s excellent interpretations of NPC designs and environments once more.

The cutscenes ooze with perky energy in their animation that brings more subtle expressions and a natural beat to the stiff dialogue and animation (as good as it was at the time) of the originals. Even the in-game interactions of NPCs are supplemented by generic emotes that generally fit whatever they’re saying. Some of the animations repeat too much and are hit-or-miss with some characters (Elora is a good example of it being done poorly, whereas Moneybags’ gestures are great). The same goes for mouth movements as well, and considering how most of them aren’t individually animated, the way it shakes out in application is impressive. As for the overall art direction, there’s wacky and whimsical beauty to the first and third games, but I feel the second remains the strongest in these aspects for reasons I can’t really explain. 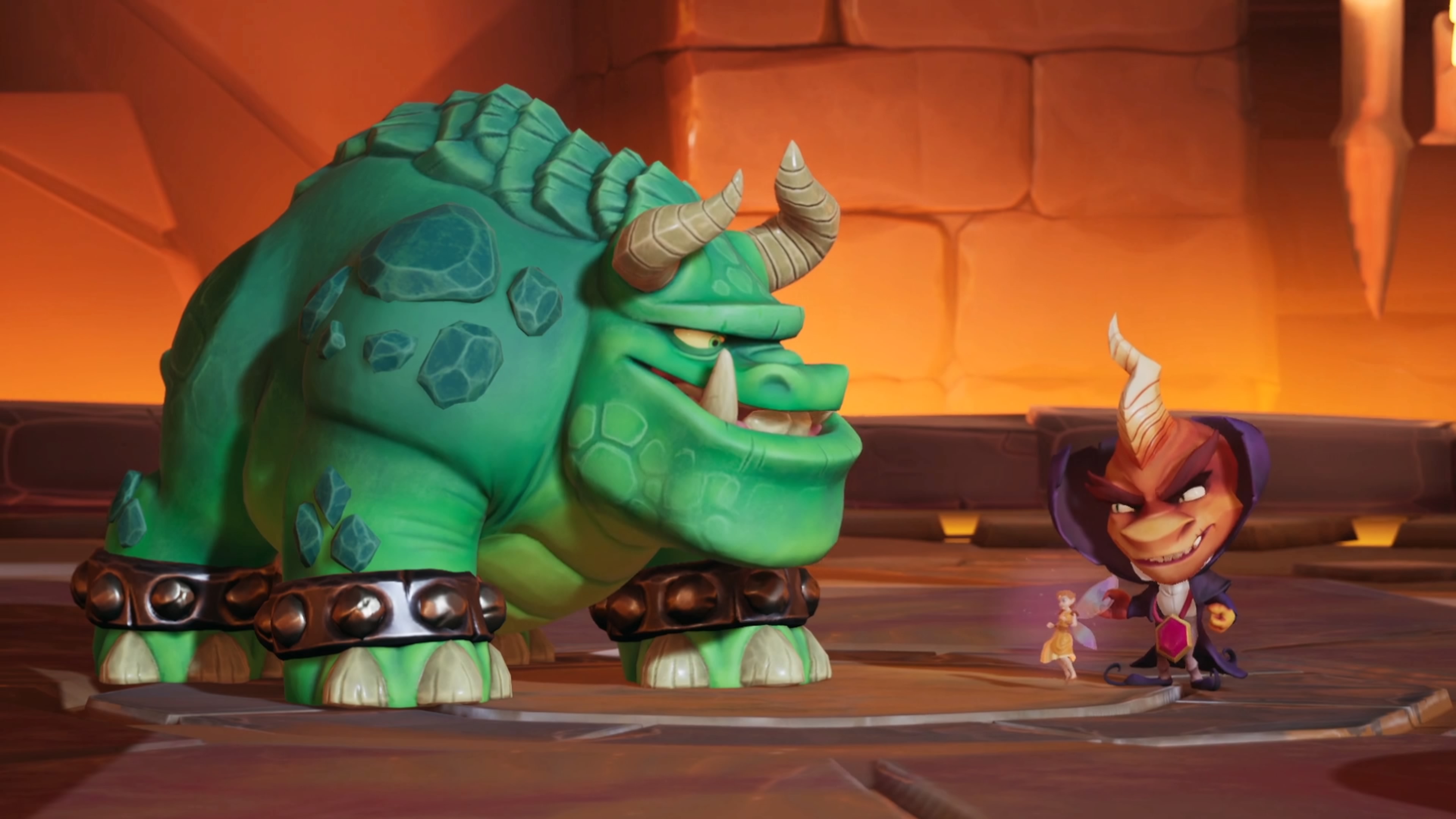 The dim-witted, clumsy demeanor of Gulp and the self-important, smug pride of Ripto are infinitely more present thanks to the subtle facial expressions and gestures of the animation. Like, when Spyro taunts Ripto at one point, he bites down on his lower lip with a mischievous grin and exaggerated stance. Half of what you get out of characters is from their expressions and movements, and that’s what these remasters deliver on. Also, did I mention how hard Gulp is? I died several times!

One of my complaints about the first game is how easy enemies and bosses are to kill. Spyro 2 doesn’t rectify this problem with the usual fodder but at least has more types of enemies, whereas the other games contain more repeating enemy types. On the other hand, the bosses are the best in the trilogy. There may only be three compared to the third game’s six, but the former are more engaging and demanding with skill. Crush is the simplest among the three but exhibits more thoughtful design than any of the first game’s bosses with loads of health, varying attacks, and an alternating behavior between offense and defense. It’s Gulp and Ripto that shocked me the most with their punishing attack patterns and aggressive tactics. You can tell this is where Insomniac Games formed the foundation of the arena-style boss fights of Ratchet & Clank in lieu of the linear, barebones bosses from Spyro the Dragon.

The core mechanics of the series remain unchanged with the sequel’s combat. There are items like rockets and bombs or power-ups for long-range fireball attacks and more powerful charging. However, these abilities are underused with encounters (mostly restricted to bosses) and usually applied to destroying metal chests. One of the coolest examples is an ice power-up in Cloud Temples that allows Spyro to encase enemies in blocks of ice. It turns a combat mechanic into a puzzle one where you create temporary platforms to access other areas, but it appears that one time and never shows up again. Sliding blocks of ice across frozen lakes to crush big enemies? Using a block to gain a boost in height to flame an enemy that’s invincible from the bottom? Extrapolations of an ability ripe with potential for combat (and more platforming) showcase missed opportunities to invigorate gameplay. I will say that platforming is much stronger in Spyro 2 with the addition of a “flutter” mechanic that does wonders to the difficulty of flight. Some levels require gliding with a precisely-timed wing flutter at the last second, which made me sit on the edge of my seat to see if I’d make it. 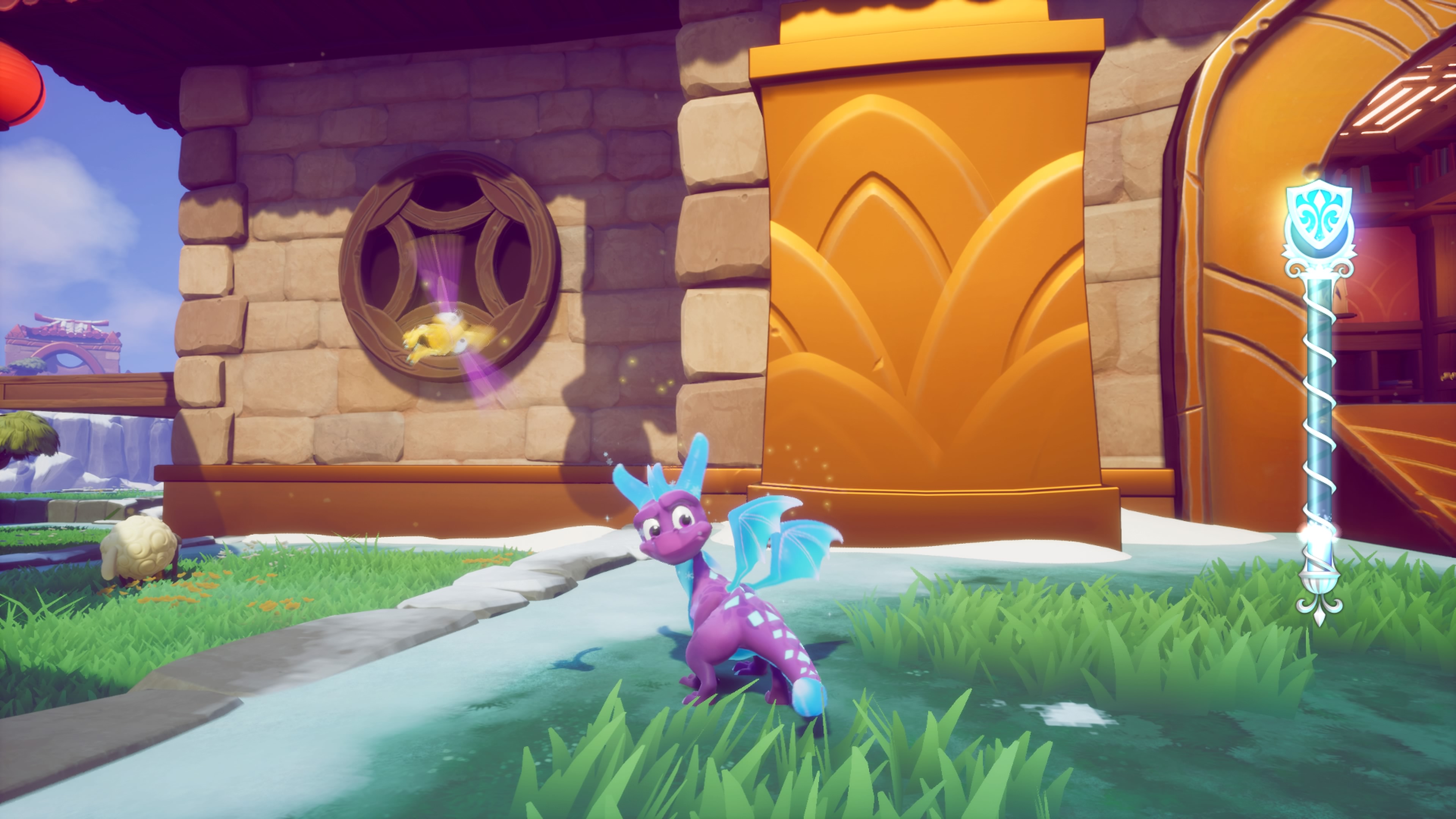 Sparx, you okay there? Ah, anyway, Look at this form for Spyro! I forgot it existed since it makes such a brief appearance, but it would’ve been great to see other elements like electricity come into play for some levels. Not as core mechanics, but temporary power-ups for particular levels.

Levels incite exploration with branching paths and layouts that circle back on themselves (another design trait that characterizes Ratchet & Clank’s worlds), which I like to call “there and back again” design. Backtracking is optional as well since previously shut doors will open and inaccessible areas will become available with power-ups upon completing the core objective. Three new abilities you unlock in each hub world are swimming, climbing, and ground bashing, so in some cases, you’ll need to revisit levels after a couple hours to complete a special minigame or reach the last few gems.

With new abilities and power-ups come one of Spyro 2’s greatest assets: side missions. The first game only incites exploration with gems (dragons don’t count since most of them are in plain sight), but Spyro 2 brings in side missions thanks to the inclusion of NPCs and new collectibles called Orbs. As I said in the last paragraph, there are different tasks to embark on if you explore and revisit levels, such as a series of puzzles to solve once you can swim in Idol Springs. If you skirt past the edges of the final room in Colossus, you’ll discover a hockey rink where you can compete against some bears. Zephyr has a whole separate area devoted to an order-based platforming puzzle. Even Speedways have hidden locations where Hunter is waiting with unique, flight-based challenges. The first game’s fantastical environments screamed for more stories and depth, and Spyro 2’s levels are appropriately packed with characters to meet and things to do. 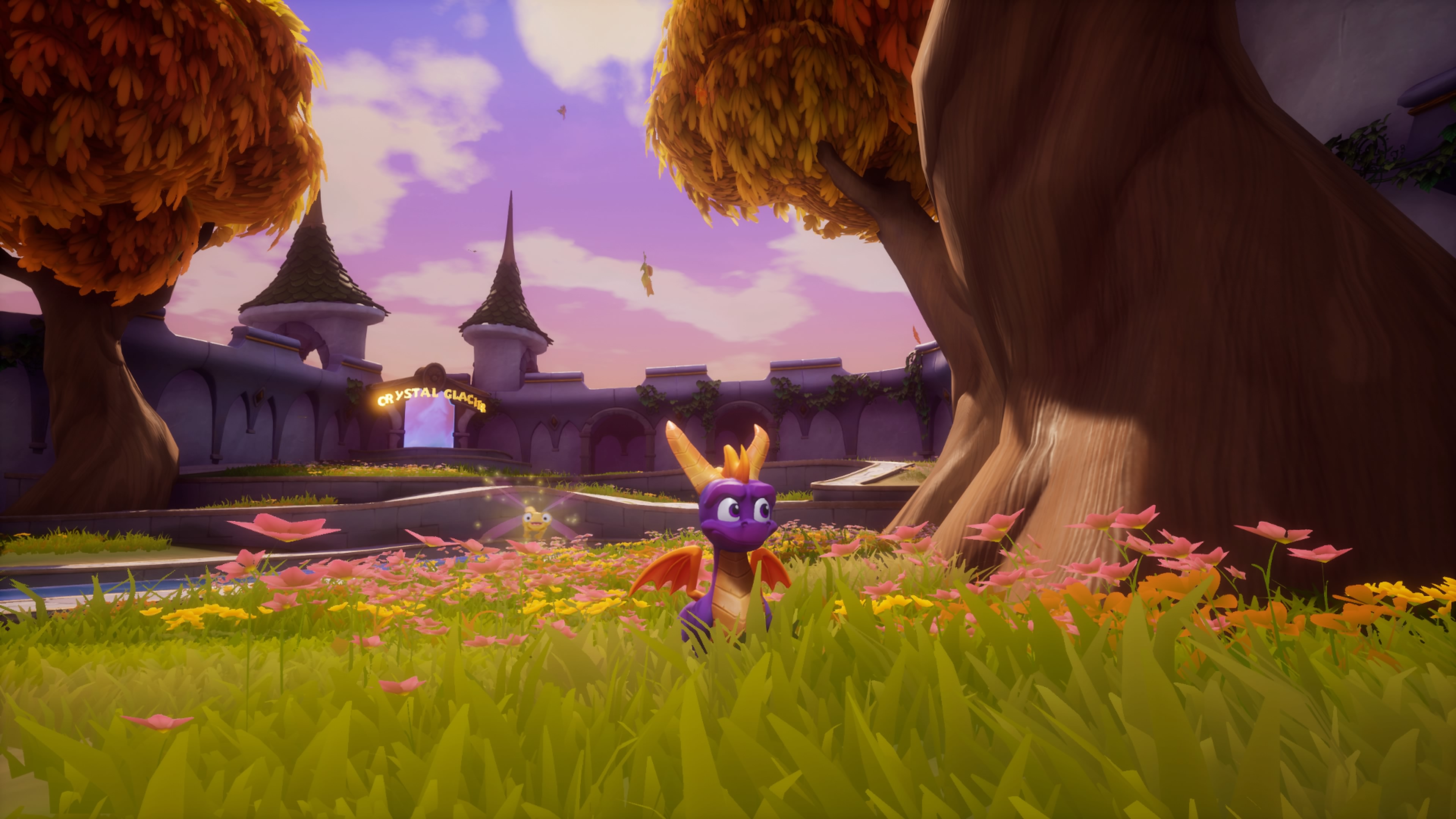 The soft, vibrant visuals of these games are a sight for sore eyes. It’s not often you get to play games that are like children’s books come to life.

Compared to the first game’s short length (even to 100-percent completion), Spyro 2 boasts a couple more hours of playtime, which clocked in around 10 hours for me since side missions and backtracking make each level twice as long to finish on average. My prior praises and criticisms with the graphics, performance, and musical adaptation stand in conjunction with my Spyro the Dragon review.

I regard Spyro 2 the most fondly out of the trilogy. It deserves to be among the best 3D platformers by soaring above the first game in every way with minor yet appreciated wrinkles to gameplay that bring more challenge to platforming and bosses, even if it squanders opportunities for more thorough integration of abilities and power-ups for even better level design. Crazy minigames and fun puzzles come along with more open levels, too, which are alive with inhabitants that make their worlds feel like worlds. Year of the Dragon may have multiple protagonists and even more content, but it loses some focus and pacing for the sake of variety. While I can say I like more about it than Spyro 2…I find the latter a preferred middle ground. It’s not too much, but not too simple. It’s just right. That’s why it remains my favorite in the Reignited Trilogy—perhaps with a spark of personal bias.