Valor And Sacrifice In Call Of Duty: WWII (Gamechurch) 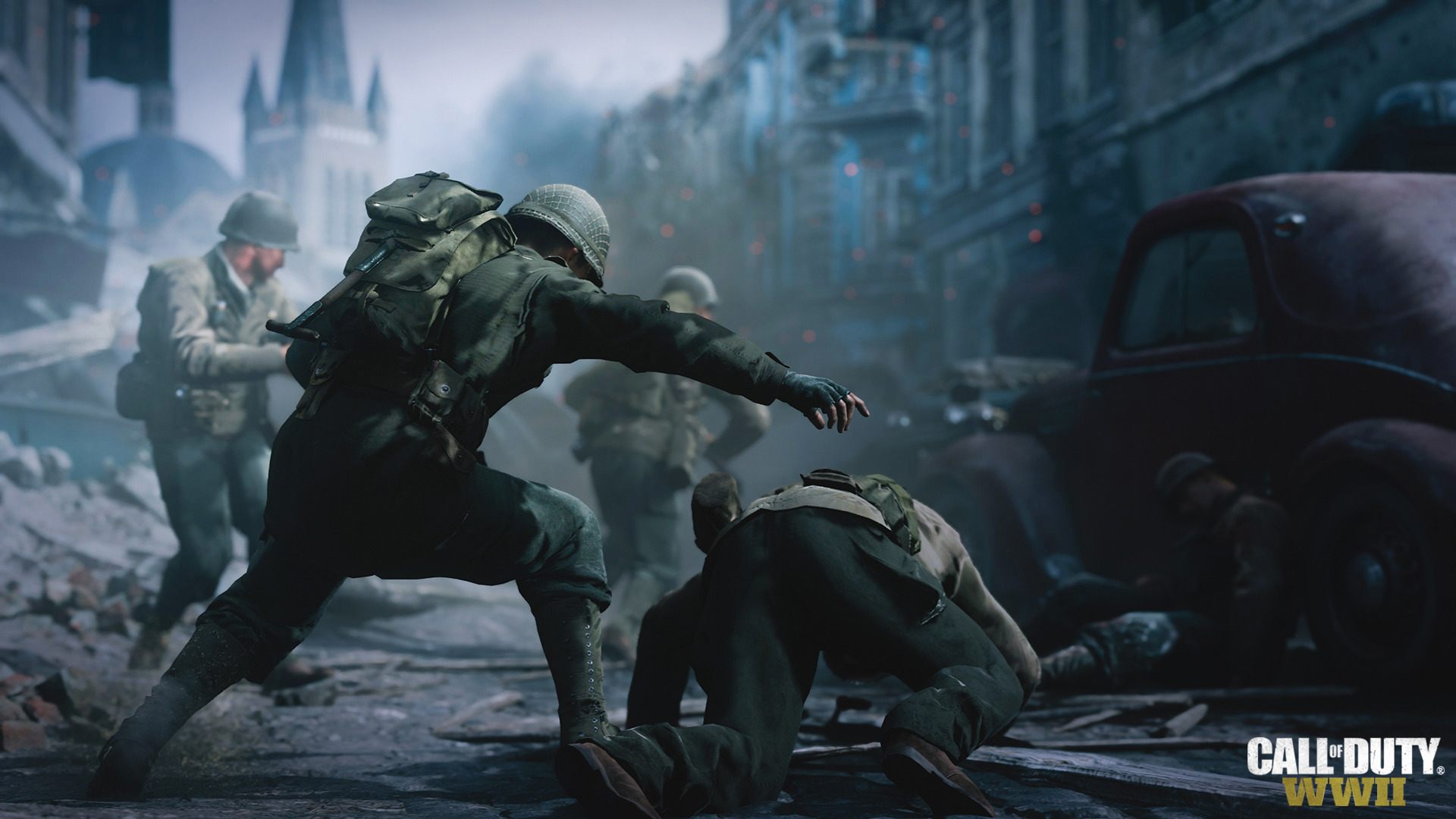 This is My commandment, that you love one another, just as I have loved you. Greater love has no one than this, that one lay down his life for his friends. – John 15:12-13

In the wake of Veterans Day, I’ve found myself thinking about Medal of Honor recipient Desmond Doss. Doss was an army medic in the Pacific Theatre of World War II. As a Seventh-day Adventist, he not only requested to observe the Sabbath on Saturdays, but he also refused to kill a soul. As a consequence, his fellow soldiers ostracized and abused him for being a “conscientious objector.” When he was on Okinawa with his men, hundreds were slaughtered and had to retreat on the battlefield of Hacksaw Ridge. But not Doss. He remained and lowered over seventy-five wounded men from its precipice for twelve hours while avoiding Japanese forces. In a biographical documentary by Terry Benedict, Doss said that he repeated a simple prayer throughout the night: “Lord, please help me get one more.” He did this without firing a single shot.

Rarely do shooters highlight sacrificial camaraderie like this through gameplay. Most of the time, leaving no man behind or saving captured soldiers are mandatory objectives for the player, but something like Doss’ actions go a step further: they were tantamount to insubordination. He refused to follow the orders to fall back because the lives of others mattered more than his own. Not only does Call of Duty: WWII have this theme embedded in its story, but also captures it dimly through gameplay with objectives called Heroic Actions. What makes these objectives special is that they’re optional, giving the franchise potential to become something far more compelling.

Call of Duty has gone from putting players in the boots of normal men to letting them play as larger-than-life figures that can do it all. However, despite the increased potential to save those around you with enhanced abilities, very few entries have given the player choices to save people of their own volition in a manner that’s both impactful and personal.

One of the closest examples from past offerings is when Call of Duty 4: Modern Warfare tasks the player with carrying Captain MacMillan to a rendezvous point. While doing so, you’re completely vulnerable and must put him down to fight back the enemy. Other titles such as Call of Duty: World at War and Call of Duty: Black Ops II have even given players the option to spare enemies on rare occasions. Outside of the campaigns, past multiplayer modes have come even closer by allowing players to revive downed teammates who equipped the “Last Stand” perk. I remember how it felt when friendly strangers would risk their lives to get me back up, which is why I always paid the gesture forward at my own expense. Sometimes, that could be the highlight of a match for someone.

It may seem inconsequential, but the gesture in itself is strange in a series that has long encouraged players to be lone wolves by building up killstreaks and KDR ratios. In WWII’s campaign, it makes a point for the player to be on the lookout for injured soldiers and others caught in close-quarters brawls. In a special infiltration mission involving the French Resistance, the player can even choose to free and save strangers to fight for their cause.

When I saw a Nazi soldier lock himself in a room with an innocent woman, I made a beeline to save her even though no prompts indicated that I could. Many shooters would present this as a scene you can’t influence to add dread and weight to the circumstances around you, but WWII says that you can stray from the main objective to save her life so she can fight alongside you later on. It may be risky to act outwardly since this could compromise the mission, but the game asks you, “Is she worth it?”

Despite my initial reaction, I found myself in an internal tug of war to save NPCs like this since they weren’t integral to the story. However, it’s a selfish mindset that videogames can put us in. We usually don’t worry about the plights and screams of side characters we don’t know well, but how much more would this have affected players in a meaningful, realistic manner if WWII had optional Heroic Actions apply to most of the main cast of characters? If the player were put in scenarios where they could lose important characters due to their own carelessness and unwillingness to put themselves in danger? Not only would the emotional impact be greater, but so would the in-game consequences, since each soldier in your band of brothers provides specific supplies and support. What if you lost the ability to have grenades tossed to you because you failed—or forgot—to save someone like Stiles?

If you don’t save soldiers in WWII, you get mere slaps on the wrist in the form of brief callouts about how you could’ve done something. But just as the consequences in the game’s namesake conflict were deeply personal and grievous, these Heroic Actions could (and should, in my opinion) be applied to prominent figures as well. This would deeply impact the moment-to-moment gameplay and story progression to poke at how loss feels in war, thereby encouraging players to naturally look out for their team members.

This mechanic could fundamentally alter Call of Duty players’ mindsets by showing them how the thrills of action don’t have to be the only type of worth gained from playing the games. There’s fulfillment and valor to be found in the challenge of risking it all to save others, whether they be strangers or your closest comrades. After all, as Doss said, “You can’t always win, but when your buddies come to you and say they owe their life to m