This is my review for the PS3 version of Medal of Honor (2010), which was published as a User Review on Game Informer.

Can Medal of Honor Reclaim Its Throne Among The FPS Kings? 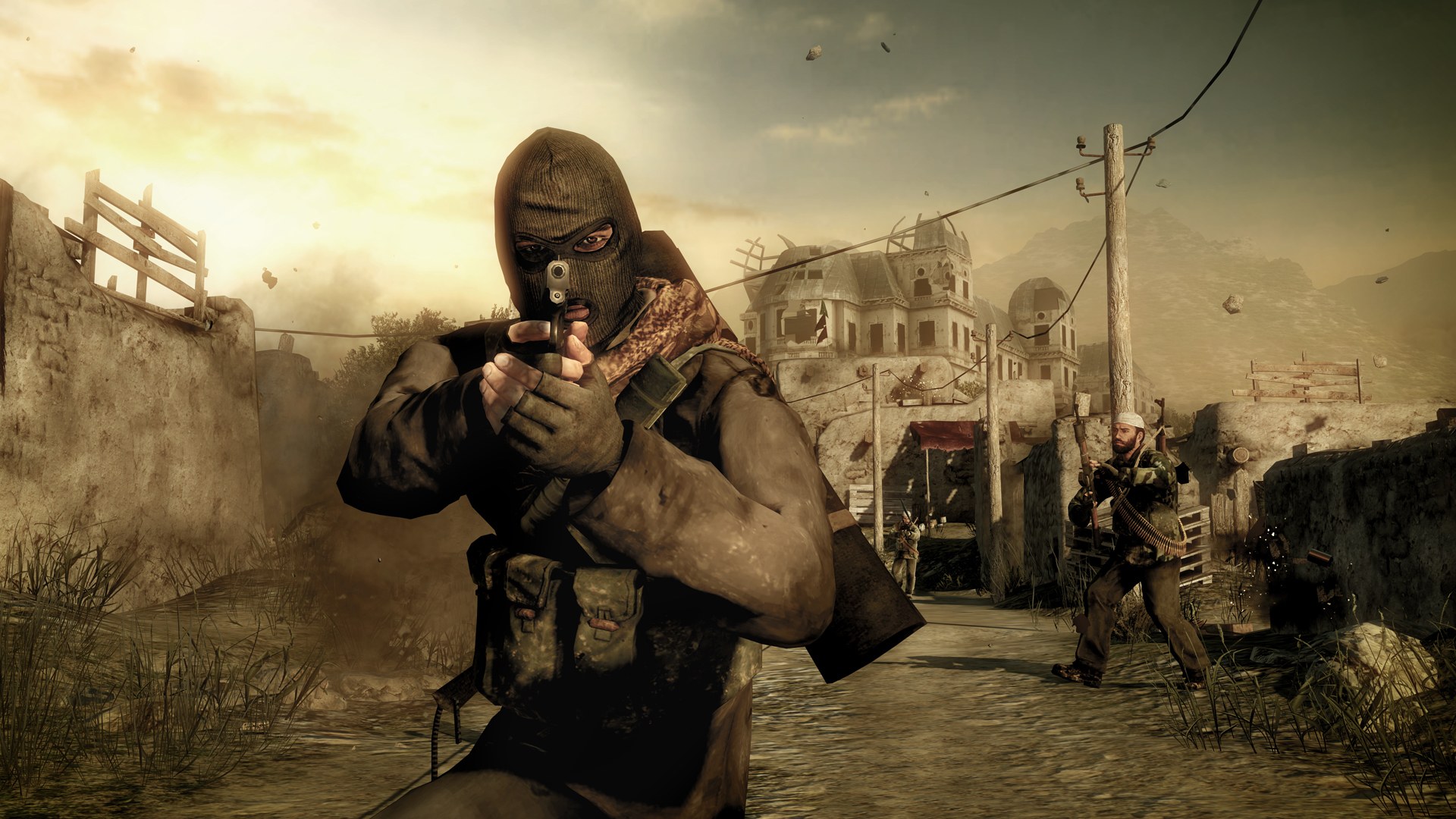 I remember hearing about the new Medal of Honor a year ago. I was very surprised to see that instead of returning to the World War 2 theater, Medal of Honor was stepping out of  its usual premise into modern war times. This reminded me of when Infinity Ward risked a move like this, and it sure paid off for them in the end! If they could do something like that for Call of Duty, I believed the same could happen for Medal of Honor. Over time, many impressive trailers and footage of the game made me more convinced that Medal of Honor was going to gain back the FPS crown it once wore. Sadly, it did not achieve that coveted goal.  But that doesn’t mean Medal of Honor didn’t get close…

Your mission begins in the passenger seat of a dirty, beat-up truck, making its way along the bumpy roads of the Afghanistan mountains. Voodoo, your comrade driving the truck, is steadily approaching a small village guarded by the Taliban. Because of the disguises you and your comrades are wearing, getting past the patrol was easily accomplished. Everything was going to plan smoothly…much too smoothly. This causes you and Voodoo to get a little concerned, but that doesn’t deter either of the men from their objective. After driving about midway through the village, gunfire breaks out! Voodoo quickly puts the vehicle in reverse and steps on the gas. Objects and bullets fly around you as the truck bounces and jerks down the paths of the village. Finally, Voodoo manages to get the truck away from the skirmish, allowing you to get your battle gear together. The fight to your target begins in a long alleyway quickly invaded by some Taliban, who are taken out easily by you and Voodoo. Scrambling down the alleyway with some sharp turns, you meet up with two comrades that also escaped from the ambush. They’re getting overwhelmed by the enemy! Thankfully, you and Voodoo make it just in time to assist them. Exposed in this open area of the village, you quickly slide to cover behind a damaged wall. With a few well-tossed grenades and support from your teammates, the area is secured quickly.

“Kill the lights,” Voodoo says as you enter the building the Taliban used to defend the open area with. A quick slash of your knife cuts the wires providing electricity to the building, and everything goes black. You and Voodoo take advantage of the darkness and the building’s small rooms with night vision goggles and shotguns. With this equipment, the Taliban never knew what hit them. You and Voodoo kick open a door leading outside to some rooftops, which you run across shortly after. Some more Taliban are encountered and taken down. But one is missed, and this one happens to have an RPG, which is used to collapse the floor of a house you and Voodoo are standing on. Thankfully, the fall wasn’t too bad, and the mission continues. Instead of more buildings, you come across a large playground, and opposite that playground are some more Taliban in another building. Quickly vaulting over a wall, you and Voodoo quickly take cover behind the poorly kept objects in the playground. The building, once cleared out, is said to have the objective inside: a hostage with important information. With caution, you and Voodoo hike up some stairs to a room with a man strapped to a chair inside. The body is quickly inspected to make sure this man is the package. “GET DOWN!” Voodoo yells suddenly before violently kicking the chair-bound body off the ledge of the building. A small explosion rocks the air, knocking both men too the ground. “Not our guy,” Voodoo says before leaving the building with you, continuing the search for the hostage.

This is an example of one of the missions from Medal of Honor. Action packed, random, and familiar. The whole game is a lot like the sentence I just wrote. Medal of Honor is a great game, but it‘s not unique. It’s like a combination of Call of Duty and Battlefield. But that doesn’t mean you’re getting the best of both worlds with this game.

I’ll start out with the gameplay. It was easy to pick up the controller and start playing. But in this case, that’s not a good thing. The controls for the game are exactly like Call of Duty’s, except for one button. I like games that have their own control scheme you recognize, like Call of Duty. When I started playing Medal of Honor, I kept thinking of Call of Duty…that’s not a good thing. Even though the controls aren’t original, they were responsive and easy to use. One unique move to Medal of Honor is that you can perform a slide to cover. When you’re near a crate, for example, if you press O, your character will slide to it. This can be frustrating at times when you slide to the wrong side of an object, or you go to an object you don’t want to move to, but I think this could be tweaked in future Medal of Honor titles to function better. One thing that doesn’t have to be changed is vehicle controls. Piloting a helicopter and an AC-130 was pretty cool. But there are more problems, like the AI. Why do I complain about the AI? Because they’re stupid. One strange moment I had with the game was when a Taliban stood in front of me for several seconds without shooting at me. I made it through the entire campaign on the hardest difficulty with much ease because of the AI. I enjoy challenges, and Medal of Honor wasn’t one.

Next I’ll talk about the story…oh, I don‘t even remember it. I was very disappointed in the plot and characters. The whole game is a confusing bundle of random (but still fun) missions with one, single objective: Kill. The. Taliban. It seems as if Danger Close (the developer of the game) tried to give the impression that the game has a deeper plot than what I just said, but underneath the layer of non-existent emotion and extra dialogue in the game, it all adds up to just killing Taliban. By the way, the characters are there. You just won’t care. Even the guy on the cover and in every trailer of the game plays a minor role in the game. He looks cool, but that doesn’t mean he’s memorable. I’ll mention one more thing about the story. One of the main characters dies. I won’t say who, but I did not feel any kind of emotion when he passed away. Please, Danger Close. Please make a better story with better characters next time.

I’m going to tell you about the sound, which will bring about a change of pace. Absolutely outstanding. You weren’t expecting me to say that, were you? I was blown away by the sound effects and music. All of the weapons sound very realistic, I’d even say they are on par with Call of Duty and Battlefield. I feel like I’m in control of the gun, like I’m really holding it in my hands. Another aspect of the sound is the music. I thoroughly enjoyed listening to the melodious and upbeat songs composed by Ramin Djawadi. He combines “Aladdin” instruments with orchestra strings that results in beautifully blended music. I like his work so much, that I’m considering buying the whole CD off of iTunes. The voice acting is mediocre, but that doesn’t change my view on the sound. Well done, Medal of Honor. You get an A+ in this category.

Finally, I will close this part of my review with the graphics. I thought the visuals were pretty nice. There were some “wow” moments in the game. After climbing up an icy mountain to the very top, looking at the morning sun drenching a valley of flowers and some snow-peaked mountains with radiant orange light was an amazing sight and a nice distraction from the war-torn battlefield. The Afghan/Iraq landscape was captured excellently, and I enjoyed traveling around the country. Guns look good too, can’t say much about them. But I think the character models need a little polishing. No one is recognizable. By that, I mean no one in the game looks unique. The only differences the characters had were different kinds of beards, and as many people know, beards are very important in Medal of Honor. 😛 I will give credit to the cut scenes, which are very detailed. Overall, the graphics are extremely nice, but the character models put a slight damper on making the graphics top notch.

I think of the average 3D action movie as I write about this game. Medal of Honor sure is pretty, and it sounds fantastic. But the story lacks a lot of luster and the game itself isn’t original. I’d say Medal of Honor is meant to be rent, or should be bought when caught on sale. (did you see what I did there?) The campaign will last you around 7-10 hours, and multiplayer is worth checking out for about a day or so. Speaking of multiplayer, DICE worked on it (the developer of Battlefield). I think it’s fine…but it’s not as good as Bad Company 2. Why play Medal of Honor’s multiplayer when you could play DICE’s own game with a more fun, robust multiplayer? I think the point is that the game has a decent campaign and multiplayer, but the current FPS kings are what you should invest your money in. Even though Medal of Honor isn’t the best, I think that the series is getting back on the right track. Still, Medal of Honor is going to have to work harder to reclaim its crown and become an FPS king once more.