This is my review for Bastion, which was published on Game Informer as a User Review. 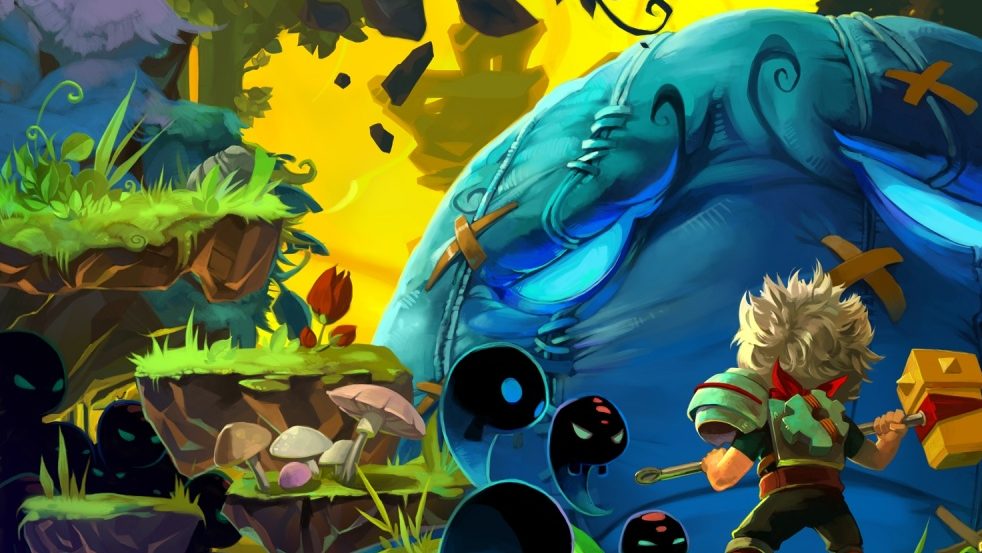 There was a deal recently on Xbox LIVE that priced Bastion at 600 Microsoft Points (normally 1200). I heard about the game and the great reviews it scored, but wasn’t that interested in it. I never tend to buy downloadable games anyway, but I did purchase Outland a few months ago and loved it. Who knows, I might dive into another treasure cove. After some thought, I took the plunge to see what awaited me…little did I know what I was about to discover.

Bastion is a special kind of game. It’s one of those gems you don’t find that often where everything is near perfect. The sound, the story, the graphics. Everything. Supergiant Games poured their souls and passion into Bastion, and it’s evident in every single aspect of the game. Without further delay, here’s why I think these things.

One of the most surprising things about Bastion is the story. Supergiant created a vast world with a rich history that I never saw coming. The basic premise is that a place named Caelonida is destroyed by a world-wide disaster called the Calamity. You play as The Kid, who wakes up to find a shattered world around him. You make your way past strange enemies and end up meeting a survivor named Rucks, who tells you that we need to start rebuilding the world by finding Cores. Your mission is clear. Get the cores, start repairing the world and try to find other survivors on the way.

I can’t reveal anymore or I’ll spoil the game for you. But trust me, this is one of my favorite aspects of the game that gets better every moment. As you progress through the story, you’ll experience betrayal, peace, anger, and surprise. I can’t stress this anymore; Bastion’s story is shockingly wonderful, creative and deep.

Bastion was actually kind of boring at first. The basics were introduced to me: a health bar that could be replenished with potions, a hammer that could bash my enemies, a special attack that uses up another kind of potion, a point system and so on. This was simple and shallow to me, but my opinion eventually changed.

I said something important about the story. The more I was exposed to it, the more it amazed me. This directly applies to the gameplay of Bastion. There turned out to be more to the mechanics (and other new ones) I described than I thought. Once you reach the “hub” of the game, you create buildings when you obtain cores. There are six in total, and they’re all important to describe.

There are actually 11 weapons in Bastion, which two buildings deal with. The first being where you organize your loadout and pick a special attack for the weapon of your choice. The other deals with upgrading the weapons. Once you have enough points and a specific item for a weapon, you can (for example) add 25% damage or tighten the accuracy a bit on a firearm. There are 5 total upgrades for each of the 11 weapons…yeah, it’s pretty deep. There’s another place called the Distillery, where you can drink elixirs and concoctions to beef up your resistance to damage, increase the amount of health potions you can carry, obtain the ability to leech health from enemies and so much more. The last three buildings involve one where you complete a list of challenges for points; a store where you can buy additional items to upgrade weapons, acquire special attacks and more; finally, there’s a shrine where you can add difficulty to the game for additional points by enduring the gods’ wrath for “blessings.” See how creative this game is? There are so many ways to equip yourself and mix things up. The possibilities become overwhelming after a while! This gives the game so much diversity because you can experiment with all sorts of things as you venture through the story. What I thought was simple at first turned out to be continuously rewarding, exciting and fresh.

Bastion is like watching an impressionistic painting come to life. The environment is composed of vivid, warm colors with visible brush strokes. Everything runs at a good frame rate and handles heavy, on-screen action very well. The cutscenes (when there are some) are only still paintings, but definitely set the scene portrayed accurately with great detail. The artists of the game painted their feelings into each stroke, and this is what makes the game even more enjoyable to play. And it’s not just the environment; the characters, items and enemies look fantastic as well. Everything brims with the light of life, the darkness of death, and the mysteries of spirituality. All in all, Bastion is visually beautiful in every sense of the word.

If I had to choose between the story and the sound, I would probably choose the sound. Supergiant are masters of music, experts of sound effects, and have a now-famous narrator of pure awesomeness. To start off, the music is absolutely breath-taking. Tracks like “Build That Wall” and “Mother, I’m Here” make me feel so peaceful and relaxed when I hear them. Other songs are either fast-paced, soothing, ominous or sad; each one perfectly fitting the mood of a certain level or area. The soundtrack should definitely be on your “listen-to list.” Second, the sound effects bristle with crisp realism. The sound of a fire crackling, leaves bristling as you walk by, and stone panels rising from an empty void are not just nice, but expand the whole experience of the game. Lastly, did the narrator succeed? Of course, he did a phenomenal job! The gritty, powerful voice of Logan Cunningham really sets the mood of the game as he comments on hundreds of your actions and tells you the entire story of Bastion. For example (in the first moments of the game), I was bashing some boxes and pillars with my hammer and he randomly comments “the kid rages for a while.” Or when I chose a combination of the hammer and the army carbine for my loadout, he piped in “A hammer and an army carbine…when I was a fightin’ man, I used the very same.” This small part of the game is so important because I’ve never heard of anything like it. Let alone that a very conversational guy would work so well in any other game. I smiled a few times at most of his dialogue and thought how difficult it must have been to record so many lines of his voice. Overall, a lot of hard work went into this part of Bastion, for which is why I tip my hat off to Supergiant.

The main quest (if played through without doing anything else) will take about 5 hours on the normal difficulty mode. However, I highly discourage this course of action. The side missions you can do consist of accomplishments; a “survival mode” where you fight off a horde of enemies as you listen to the narrator tell a story about one of the main characters; levels where you master a specific weapon for three prizes (some of which are very challenging, but rewarding) and different endings you will long to play through. For me, Bastion took around 10 hours to complete. I was left very fulfilled with the length of the game. In conclusion, not only should the above categories convince you to purchase the game, but the satisfying length and replayability should seal the deal.

As I was saying in the beginning, Supergiant Games’ passion for making games is obvious. I can tell that this team of seven people (hard to believe!) went out to pursue their dreams with a desire to have a good time while maintaining quality. In doing so, I believe they had as much fun creating Bastion as I did playing it. It isn’t just a game, I think it’s a journey into the imaginations of several gifted people that touches the soul. Bastion is a must-play. In my opinion, the game is a classic that other developers should look up to for inspiration. Now go save Caelondia!