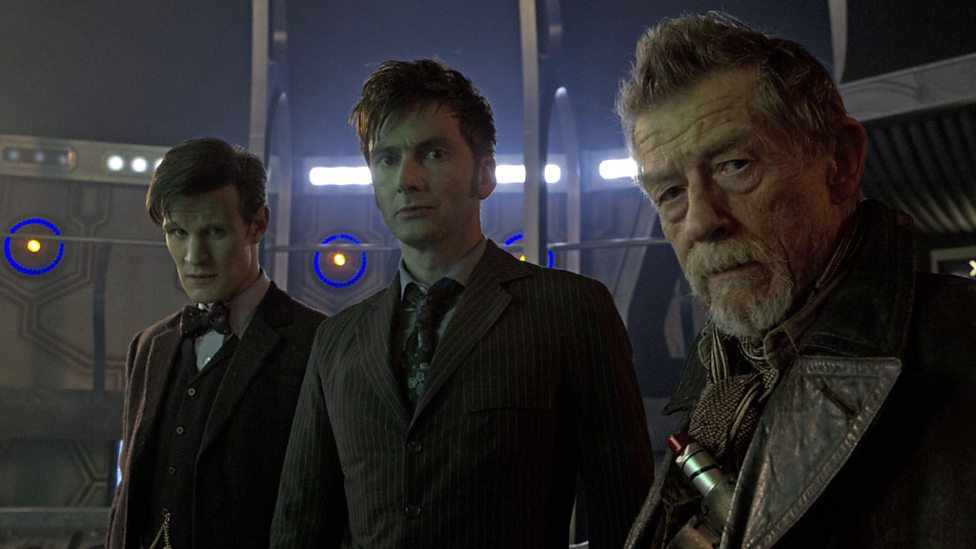 When it comes to the amount of power, influence, and intelligence the Doctor possesses in the Doctor Who TV show, one could conclude that he is tampering and meddling with forces that only God should control. He’s a finite (albeit ancient) alien life form that can attain new bodies after being mortally injured; he captains a time traveling ship of unimaginable and impossible capabilities; he wields a virtually universal tool capable of opening, fixing, and analyzing almost anything, and he has experienced more happiness, anger, sorrow, excitement, and anguish (and even more emotions than I could list) than any normal sentient being would be able to handle without becoming utterly insane. A character in the show was able to access and comprehend the Doctor’s mind and history, and he perfectly sums him up by saying, “He is like fire and ice and rage. He’s like the night and the storm in the heart of the sun. He’s ancient and forever. He burns at the center of time and can see the turn of the universe. And…he’s wonderful.”

Man, wouldn’t that make for a nice subtitle for anyone on a resume? Perhaps that’s a bit too pretentious? Yeah, maybe…

So, if the Doctor is as awesome as he sounds, and since the show is legitimately excellent when it comes down to its deep characters, creatively bizarre stories, high quality music, surprisingly good special effects (especially since Series 5 began), well-paced plots, and constantly changing, diverse settings, shouldn’t it make for a fantastic video game?

Surprisingly, there are several examples of Doctor Who video games, especially throughout the 80s and 90s. But they are odd indeed, failing in the realms of the platforming, arcade, and puzzle genres. For example, “Doctor Who: The First Adventure” is a set of four mini-games ripping off big titles like Space Invaders and Pac-Man. The most recent attempt to bring this franchise some fortune was from Supermassive Games with “Doctor Who: The Eternity Clock,” which was released in the former half of 2012 as an action/adventure game. Unfortunately, it was met with negative or lukewarm (at best) criticism across the board. So what is it that’s holding Doctor Who back from being a successful game? What genre, creativity, and imagination are developers missing? I’ve mulled over this question for a little while, and I’ve come up with some jumbled ideas on how to set this wibbly-wobbly misfortune straight.

The most important thing to consider first is what genre would be the most fitting. The action/adventure, platformer, and arcade genres have already been explored, but they haven’t been good fits or, at least, weren’t handled well enough by developers. The Doctor rarely (if ever) fights or looks like a gymnast. He resorts to outsmarting or foiling his enemies with cunning plans, masterful and manipulative rhetoric, or, well, simply running away. There’s also a large amount of investigation for clues, tricky brainteasers and conundrums to solve, and the constant usage of deduction with given evidence (which actually gives the show a crime drama vibe). This obviously makes the aforementioned genres seem inadequate as the main basis for a Doctor Who game. However, one manages to stick out in my mind as the perfect choice: the point-and-click genre.

It simply wouldn’t work well or seem right having The Doctor freely doing crazy platforming or some impossible sort of combat with combos and what not. I like to think of The Walking Dead episodic series as my key example of what I’d like to see. In this game series, Lee (your character) can only perform certain actions within context, certain scenarios, or scripted events. Can he take out an ax or weapon at any time and start flinging it at zombies? No, weapons like that are required during intense QTE-like moments or will come up as an option among several others when moving the indicator to points of interest on the screen.

What I’m trying to get at is that this is how an amazing Doctor Who video game could be structured. For example, The Doctor shouldn’t get involved with combat on a whim, but only during dire times. Let’s say he’s pinned to the ground by an enemy. To dodge, the player must tilt the analog stick left or right depending on where the enemy strikes. But while this is happening, the Sonic Screwdriver must be used as quickly as possible during the moments where he’s not dodging to cause, say, electric wiring in the ceiling to topple onto his foe, frying him in an instant. This is simply a random example, and I could give many more that could serve as well placed, nerve-wracking moment.

What if there were some puzzles like in The Walking Dead? What if the Doctor was in an ancient labyrinth that – to open the exit – required figuring out how to unlock a stone door by analyzing ancient carvings on the walls. Does a certain segment reveal the order of how to press the buttons? This could prove to be interesting. And yes, The Walking Dead only requires the player to walk around and examine the environment for clues and tools necessary to progress, which makes the “puzzles” fairly easy and straightforward. However, imagine this aspect of The Walking Dead, but deeper, more complicated, and diverse for Doctor Who. Just one contributor to this wish is the Sonic Screwdriver, which could have an exceptionally pivotal role. For example, let’s say The Doctor needs to find the right frequency on his universal device to activate the controls for a mainframe or something. The camera could zoom in on the Sonic Screwdriver, provide some sort of visuals to indicate the problem at hand, and the player could play around with the device’s buttons and configurations to set it up correctly. One function could involve moving the analog sticks in a 360-degree motion until a frequency is discovered, or perhaps a series of imputing a precise “code” (button presses) could be found with clues in the environment. I’m sure game developers could come up with infinitely more creative methods of using the Sonic Screwdriver, but hey, at least this is a start!

When it comes to the scripted QTEs of The Walking Dead, what if a Doctor Who game had this in addition to running segments with a behind view of the Doctor? I can imagine the tense moments of pressing the correct button to jump over chasms, swooshing the analog stick the right way to avoid objects, and pressing a sequence of buttons to open an electronic door from a distance with the Sonic Screwdriver. Think of them as platforming segments in a way, but from a different perspective with less free movement (think “Temple Run,” but better).

Even the TARDIS could play an important role, having the player move around the circular panel at the center while zooming in to pull specific levers, push buttons, simultaneously twist two knobs, or use the Sonic Screwdriver in some strange fashion. The possibilities are broad in this little area.

To change topic a bit, I believe the story should be the absolute center of this game. Doctor Who is no stranger to having excellent stories, ranging from having themes consisting of thrilling horror, tragic loss, and swashbuckling fun. There’s simply too much that a Doctor Who game could draw from for a story. It could literally take place on any planet at any place during any time period. What to choose? That’s just too hard to recommend. However, I do think it would be a good idea to combine all of the themes (and ones I haven’t mentioned) together. How so? Well, if there was a dialogue system that could let the player choose what The Doctor (or other characters) could say, a morality system with ambiguous choices, and chances for the player to decide which path to take (such as at a forking road), this game could turn into a personal, emotional experience of grand proportions. And the reason why I suggest something like this in the vain of The Walking Dead is because it makes sense. Sure, there may not be a canon story as a result of this direction, but imagine the pressure, excitement, and buzz this could cause. Being in the position of such a powerful being would be intimidating, and being able to decide who lives or dies, what’s destroyed or saved, and how something is resolved or broken would craft a Doctor Who story that not only reflects the personal values of the player, but also be consistent in regard to the Doctor. He is capable of laughing away at his enemies with a smile and a skip in his step, but sometimes he can unleash a blazing fury and rage like no other being can muster. With difficult moral choices in addition to ones that reflect certain philosophies, this can work within the context of The Doctor’s complex, multifaceted personality while also resulting in dozens upon dozens of branching endings.

The prospect of playing something like this excites me, especially the idea of an ever changing, deep story. What about the visual style of the game? This is wishful thinking, but top-notch, photorealistic graphics with actors and actresses from the show doing mo-cap would be the most preferable option to me. Seeing the characters from the show (in addition to exclusive new actors/actresses for the game) in detailed environments with realistic lighting, physics, weather effects, and impressive scope would be fascinating to see. This could also appeal to and entice many people that might not even like Doctor Who with production quality of this magnitude. However, this isn’t likely. I can still imagine the graphics in many forms. Stylistic, anime-like, comic book-like (I’m shamelessly ripping off The Walking Dead again), cell-shaded, you name it. A Doctor Who game could be portrayed in myriad of artistic, creative ways.

Well, those are my sporadic and quick thoughts on what I think would constitute for an incredible Doctor Who game. When it comes to selecting a developer to make it, I honestly can’t think of one (besides Telltale Games, of course) that would be qualified for the job. If you can think of one, let me know in the comments below!

In addition, what do you think of my ideas for a Doctor Who game? Are some of them great? Lame? What would you change or keep that I’ve put on the table? Do you have something entirely different in mind, or do you just believe that Doctor Who can never work as a video game? Allons-y in the comments!