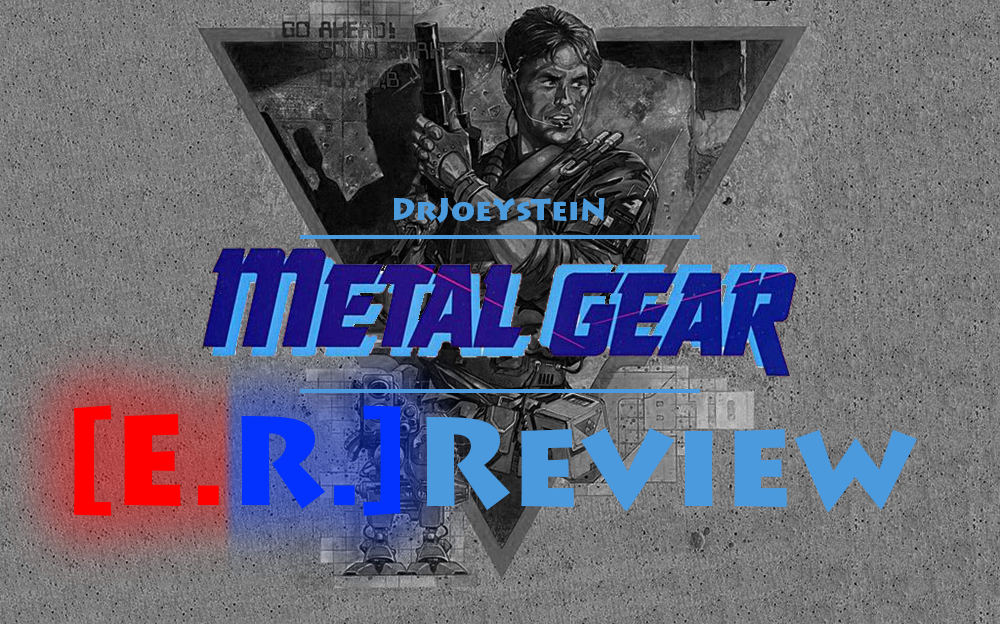 You know who Hideo Kojima is, and let me tell you, he’s always been enthralled by cinema. It blatantly reflects in his philosophy as a video game developer, whether it be using characters’ names from 2001: A Space Odyssey, including lines from 1984, being directly inspired by character designs in Terminator, or taking cinematographic cues from 24, Kojima gives meaning to the adage that “nothing is original.” Indeed, before he even made Metal Gear, it was a movie that pushed him to go into game development. When Kojima watched The Great Escape, the scene where protagonist Steve McQueen is attempting to sneak out of a Nazi Camp filled him with excitement and tension. It made him think, “What would it be like if you were actually there? What if I could simulate this somehow in a game and have it be interactive?” This simple pondering led him to believe a fusion between the interactivity of games and cinematic thrill of movies was needed, and since Kojima was uneasy about finding success in the film industry, he went into the game industry and found it.

It’s no wonder that he’s one of the most recognized game designers today, since he helped lead the charge of pioneering core aspects of the stealth genre and the potential of games to mimic (or even improve upon) the grand storytelling and cinematography of films. Most people would say these accomplishments were made in Metal Gear Solid for the PlayStation, and it’s understandable to believe that. But the true bedrock of the legendary franchise is found in Metal Gear for the MSX2 home computer. Having played it and the sequel before I delved into Metal Gear Solid V: The Phantom Pain, is it a heavenly, espionage experience that has aged well? Not exactly, but there’s no doubt it helped pave the way for Kojima’s wondrous future with its solid formula and design.

Metal Gear marks the debut of Solid Snake, who is tasked by Big Boss to infiltrate a military facility known as Outer Heaven to save FOXHOUND agent Gray Fox. This agent was able to send out a cryptic message before his incarceration with only two, mysterious words: “METAL GEAR…” So, it’s also up to you to find out what he meant with the help of local Resistance fighters, and along the way, you’ll eventually find out that this is no ordinary mission in the slightest. I couldn’t say much more about the plot due to spoilers, which speaks for the minimal exposition and character development in Kojima’s first outing. This took me by surprise since I’ve been accustomed to massive quantities of these aspects in all of his other games, so keep in mind that most of the characters merely act as guides than anything else, telling you how to use certain equipment and dropping hints about where you can find equipment and secret rooms. You get no sense of who the Resistance fighters are, what Snake’s or Big Boss’ personalities are like, etc. I would say the reason for this is because Kojima was attempting to prove that games weren’t just about arcade action where only gameplay matters, yet was still confined to a certain degree or felt obligated to not make the game too different from the norm at the time.  I say this because he proved with a sequel that he could have done much more with the first game, but perhaps he didn’t have as much creative freedom over the latter? Whatever the case is, Metal Gear nevertheless lacks a compelling narrative (up until the revelation near the end) and could’ve done more with its cast. The narrative moves the game along at a decent pace, sure, but that’s not saying much for a series like this.

The way you control Solid Snake is easy to grasp. You view him from a top-down perspective and try to get past enemies by analyzing their movement and using the environment to your advantage. They can only sense you if you’re in front of them, so getting past them in low numbers is a breeze once they turn around. On the other hand, when there are a lot of grunts in one area and security devices like cameras and laser tripwires, you’re going to be hard-pressed to remain covert. The reason why is that enemies instantly respawn when you exit an area, so when you have to backtrack, they’ll be waiting for you again to take out or sneak past one by one. The game is largely about simple patience rather than strategic planning or execution in its design, after building up a plethora of weapons and ammo halfway through the story, you might as well force your way through busy spots or run through them since there are no penalties for doing so (unless you are a perfectionist). Standing in place waiting for a camera to turn its lens away from you or the perfect moment when three to five enemies aren’t looking your way proves to be more of a chore than anything else. Nevertheless, it’s still satisfying to pull off chocking someone from behind or quickly shooting a group of enemies with a silenced pistol without their noticing you. The same goes for the fun in a heated shootout, but blowing your cover has its equally frustrating quirks.

In the PlayStation 3 adaption of the game, you switch between your equipped firearm and item by accessing your weapon and item inventories with R2 and L2, respectively. Your weapons, ranging from a machine gun to a rocket launcher, will help you beat certain bosses, get to new locations, and more. You’ll likely be overstocked with ammo since enemies drop it fairly often, so you needn’t worry about running empty if you’re conservative. However, it’s nice that there’s a lot to spare for the sake of it since mowing down people can be tough. Because Snake is constricted to a grid for movement and shoots bullets that only travel as fast as enemy movement, you can imagine trying to align yourself correctly to take down quick foes. It can be infuriating since they move erratically when alerted to your presence; you’ll be frantically moving around trying to one-off bullets in a split second since – if you stop – enemies can easily tag you because their bullets travel faster than yours do…for some reason. Perhaps these frustrations are intended punishments for being spotted, but since stealth can became more frustrating to deal with half of the time due to its sheer banality, it was better to go with the alternative. Both gameplay states had their fun moments, of course, but when you have a stealth game where stealth isn’t always the most preferred and enjoyable option, something is off with the balance between it and combat.

As for items, I enjoyed how they relate to your objectives and progression. You have key cards to access new rooms in Outer Heaven, protective gear that allows you to breath in gas-filled rooms or underwater, and, yes, the iconic cardboard box that can fool everyone. You’ll need all of this equipment and more to get past traps, through doors, and deal with unique situations in unexpected ways. When you’re in a hurry, however, having to cycle through all of your key cards to see which one opens a door can be extremely inconvenient, resulting in your death since you can only equip one item at a time (e.g. switching key cards in a gas-filled chamber isn’t a good time when you really need the gas mask on Snake’s face). The inventory management isn’t great in this vein, but overall, it functions well on the fly.

What’s important, though, is how you use all of this stuff in relation to the level design. How is it? While there are some ridiculous tricks you’ll encounter (the master of trolling gamers got an early start), the game still has a nice ebb and flow with its acceptable amount of backtracking, which naturally allows you to become familiar with the world and where you need to go later on. There are also great moments where I was pleasantly surprised by answers to problems thanks to the constant stream of new items and weapons to test out, so this helped prevent the experience from growing stale. But to go ahead and put it simply, the gameplay represents a stepping stone for Kojima. It has its frustrating and annoying moments with excessive backtracking, limiting combat, and whatnot, but the game design grows on you since it demonstrates great potential and – in this day and age – is simply fascinating to look back on since stealth games during its age were few and far between.

The visuals work for the gloomy Outer Heaven setting, and most objects and rooms are detailed well enough, but the pixelated graphics aren’t particularly memorable in their construction and color palette. The repetitive use of drab grays and browns gets old after a while and the character models could’ve been better, but the important thing is that I get the sensation I’m somewhere I shouldn’t be with the fitting, oppressive atmosphere of this militaristic complex. As for the audio, you’ll definitely recognize several sounds that went on to pervade the entire series (such as the exclamation point alert and codec!), and a lot of the other 8-bit sounds for rocket launchers, opening doors, and whatnot are appropriately done, though I wish there had been more music for new locations. Hearing the same sneaking theme and alert music over and over again can get tiring, but at least there are some great, driving melodies within the tracks. In comparison to its sequel, the audio as a whole and…well, practically everything else pales in comparison, but that will be addressed later on. It’s worth mentioning on a final note that you’ll be clocking in around three to five hours depending on how fast you can play. It’s a decent length for this fledgling stealth title, and with a post-credits challenge mode where you can try to defeat all the bosses in a row with a single life, this acts as a tempting test to push your ability to predict foes’ paths with sparse, well-timed shots.

Metal Gear is a flawed experiment that hints to something much greater to come. It reminds me of the likes of Assassin’s Creed and Uncharted: Drake’s Fortune. They were great games with vast potential that only had to be realized in a following game (which thankfully occurred for both series), and you can see these positives in Metal Gear with its bold, stealth-oriented gameplay, vast array of cool items and weapons, level layouts, and subtle charm that seems to be a part of its universe, story, aesthetics, and audio. The time for this to be tapped into would come another day, since poor design choices and unrealized potential in every corner prevent this game from living up to what the series would became later on. In a way, you could say the early evolution of Kojima’s works mimics Naked Snake’s arduous, long journey to earn the title of Big Boss. He wasn’t worthy at first, but he determinedly showed what he could do in his victories until he eventually reached that goal. In the same way, a young Kojima’s unsteady yet promising debut showed he could become a “Big Boss” among game designers, and by learning from mistakes found here, it’s a name he rightfully claims now.

The pictures taken directly from Metal Gear are courtesy of Cool Ghost’s great guide, which you can check out on lparchive.org. Art is taken from the game manual, excluding my original edits.