This is my review for Resident Evil 2, which was originally published as a user blog post on Game Informer.

Well, this was a much longer absence than I planned on taking. I posted Part 1 of this blog series last year in October and was hoping to get to this one in a month. Good, old procrastination. What can you do? Anyway, for those that read it, I thank you for doing so and apologize for the inexcusably long wait. So, here we are! I finished Resident Evil 2 about a week ago and have my verdict on it. I’ll go ahead and let you know that this will be a short blog due to the fact that this game is very similar to its predecessor. I don’t want to bore anyone with details I already discussed in Part 1, but don’t worry; if you haven’t read it, I’ll try not to leave you in the dark. 😉 Now, let’s go ahead and finally walk further into the famous Residence of Evil… 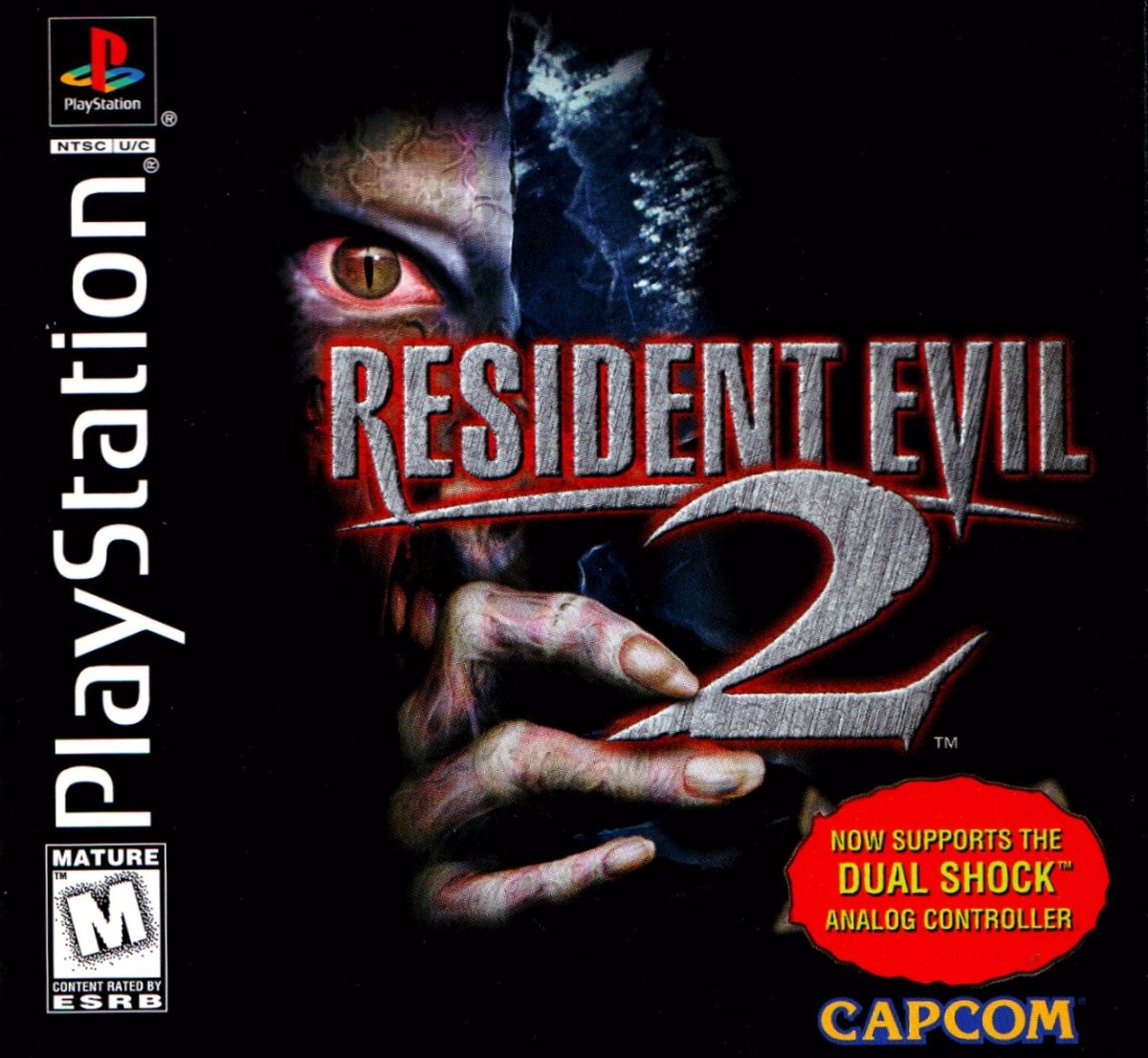 Those eyes must mean it’s a half-reptile zombie…heck, they got giant zombie alligators. That’s completely normal for Resident Evil!

As I start up a new game, I’m expecting another wonderfully terrible cutscene with real-life actors. I’ve already underestimated this sequel because I’m greeted to a fully animated cutscene with detailed 3D character models and environments (considering this game came out in 1998). The premise starts out with Leon Kennedy, who is the newest S.T.A.R.S. agents in Raccoon City. He’s driving down a highway in the city and stops when he encounters a woman lying in the middle of the road. He steps out of his vehicle and finds himself suddenly overrun by zombies! He runs into an alley in confusion and saves a woman who bursts out a nearby door by fate. Both of them clamber into a police car that’s close by and drive away. The woman turns out to be Claire Redfield, who is the sister of Chris Redfield. She tells Leon that she’s come to Raccoon City to find her brother, and Leon tells her he’s just having a weird first day as a S.T.A.R.S. agent. After acquainting with each other, a zombie unexpectedly hurls itself from the backseat! In this chaos, Leon crashes and swirls the car backwards into a pole, which sends the zombie flying out the back window. Seconds later, a semi-truck comes zooming towards Leon and Claire’s car because the driver had become infected, rendering him with no control over his vehicle. This forces Clair and Leon to swiftly evacuate before the semi-truck collides with their car in a huge mess of flames. Since Clair was in the passenger seat she got out on the other side, which separated her from Leon by a wall of impassable heat. It looks like both of our protagonists are at a major inconvenience. Leon decides to shout at Clair to head on over to the Raccoon City Police Department for safety so they can meet up…if they can survive the trip there and what awaits them.

I’ve gotta say that this is a better impression than I had with the first game. The setting is more “explosive” and there seems to be improved graphics. I definitely decided to keep on playing. 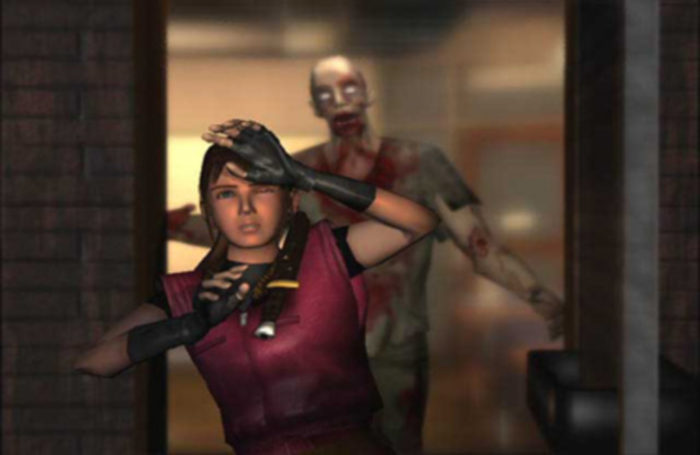 Your first meet-up with Claire. It changes the entire course of the story.

The gameplay is clearly and largely unchanged. This is definitely not a bad thing because it was what made RE1 unique. For those that haven’t played RE before, I’ll briefly lay down a few of the concepts. RE does not have a movement control layout where you can easily move in any direction like, say, Call of Duty. If you want to go backwards quickly (for example), you have to turn your character around 180 degrees and then start running. Instead of a swift flick with the D-Pad or analog stick, you have to make two separate movements. This may sound annoying or flawed, but I’ve come to realize it enhances the gaming experience. Come on, if there’s a huge zombie spider crawling down the hallway, it’s going to be nerve-racking to have to take more time to get out of there! Hopefully you get the picture. Other simple mechanics include running, shooting, and an “action button” (for picking up items, etc.). The last major thing is how items work. You can take a certain amount with you, store them in a safe room, and…well, use them. A couple important ones would be Ink Ribbons, which are items that allow you to save the game; herbs that regenerate your health; weapons of all sorts, and the rare luxury known as ammo. All of these items have their limits, so being conservative and wise with them is a must in RE. So, that’s pretty much it to discuss about the gameplay. Like I said before, the emphasis of RE is on survival and horror. Both are definitely present once again and work well together to make the game as fun the second time around. 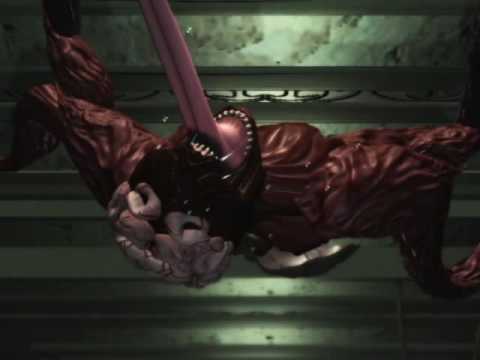 You may have a legitimate reason to run upon seeing this…maybe.

Even though the addition of cinematic cutscenes is an indication of advancement, the graphics actually remain largely the same as RE1. However, the character models and environments seem to be less pixelated and a bit more detailed. And the setting for RE2 in itself looks better than RE1’s. There’s never much to go into with graphics, and RE2 is no exception. To summarize, the graphics are just as good as the first game with slight improvements to detail.

Just is the case with RE1, the voice acting is still horrendously bad. It’s forced and sounds directly read off the script with no emotion. However, the sound effects and music are great. The former are very realistic, and I once again give the example of how even small sections of floors sound different when stepping on different materials, even if just for two steps or so. The drip of a water leak, the ruffling of feet, and the sound of flesh being torn apart (I know, that sounds nasty :P) make this aspect of RE2 very realistic. Secondly, the music complements the environment very well, sounds fitting, and always enhances any moment during the game. The fast-paced shrills of stringed instruments when a scary zombie is chasing you or a full orchestra playing loudly during a boss fight is all great. 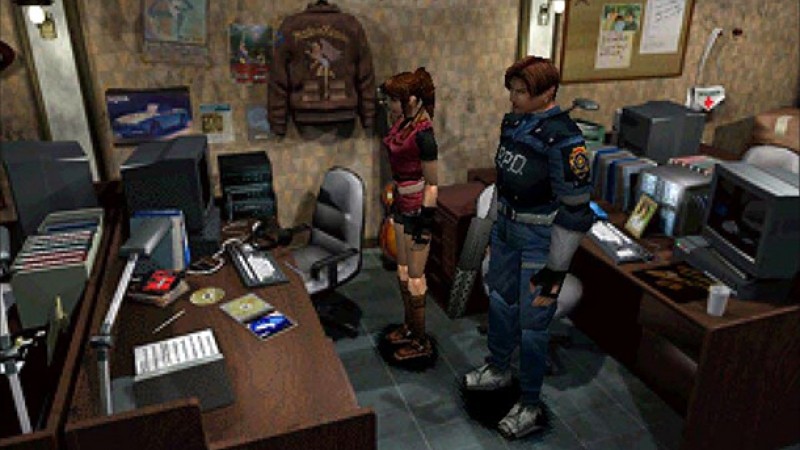 “The craftsmanship of this cheap desk is exquisite! Wouldn’t you say so, Leon?”

Like I said, there’s not much to say about RE2 in comparison to RE1. Both games are very similar in terms of graphics, gameplay, sound effects, and music. So even though it isn’t a vast improvement over the original, there’s one thing I’ve left out that was a big game changer for me. For the first game, you could choose between either two characters. Although both of them have slightly different stories, they are mostly the same. However, RE2 gives you a much better reason to play as both characters. Playing as Leon leaves a bunch of story gaps and questions left to be answered. So what did Capcom do? They left a lot of the answers to be found in Claire’s part of the story. I was enticed into playing it and was definitely glad that I did because I reached the true ending. You can also continue with two different scenarios where both characters switch places, which is a cool way to see “what if this happened instead?” The point is that the replay value of RE2 is greater than its predecessor.

In a brief conclusion, RE2 isn’t much different than the original. But since there have been slight improvements to the game, I think it is slightly better. I think it deserves…

Yeah. This is the way I’m rating the RE games (for those that don’t know). Anyway, thanks for reading! If you were a little lost, I would definitely check out Part 1 if you’re interested because I polished it up a bit. I will DEFINITELY be back with a report on Resident Evil 3: Nemesis in around a month at the most. I’ll also be thinking of other topics I’d love to tackle since my school semester is over. Until next time!