The Significance Of The Walking Dead Winning A GOTY Award

I personally don’t enjoy watching the VGAs on the Spike TV channel. The activities and dialogue that pervade the event are mostly immature and corny, so I’d rather avoid the whole thing rather than endure it to watch the awesome trailers and teasers for upcoming games. I prefer to look them up later on YouTube or something. So I eventually found out Dark Souls II, the Phantom Pain (Metal Gear Solid V), Tomb Raider, The Last of Us, and a couple of other miscellaneous games were shown. I also ended up looking at which games won this year’s VGA awards, just to see what people voted for. Halo 4 obviously won Best Xbox 360 Game and Best Graphics; Journey nabbed Best Indie Game and Best PS3 Game, and a slew of other games like Borderlands 2 and Mass Effect 3 are among the victors as well. However, the honorary Game of the Year award went to, wait…The Walking Dead? 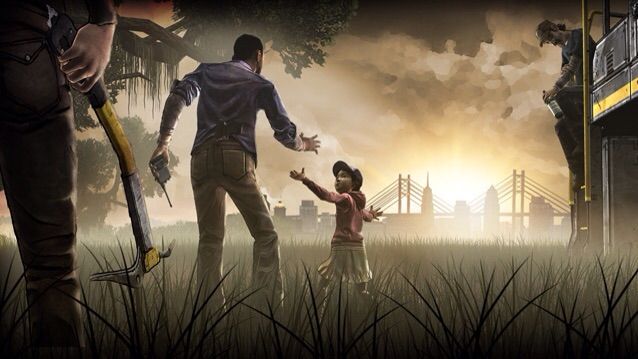 The bond between Lee and Clementine is what drives The Walking Dead’s story.

This doesn’t seem right. The ambition of Halo 4, emotional impact of Journey, excitement of Mass Effect 3, depth of XCOM: Enemy Unknown, or creativity of Dishonored could not topple Telltale Games’ “The Walking Dead” episodic series? Don’t get me wrong when I say this though. I’ve played the first two episodes of the series and think it’s very well done. The comic book style graphics are awesome and bring TWD’s origins to life; the characters are relatable, believable, realistic, and worth caring about; the moral choices you make with your speech and actions keeps you engrossed at all times, and the story is substantially written and paced. My point is that the series is certainly worthy of being a GOTY contender because it’s a memorable experience. No one would’ve thought it would’ve been when taking Telltale’s past record into account, which makes it all the more impressive. However, there are several reasons why it does not deserve the GOTY title. In my opinion, it’s simply not on par with other titles from this year.

What does deserve GOTY could be a number of other games, even excluding ones I’ve already mentioned. How about Far Cry 3, Assassin’s Creed 3, Transformers: Fall of Cybertron, Max Payne 3, or Guild Wars 2? Although I haven’t played some of these myself, I think many would agree they are nearly as good or better than TWD. Yet, all of these praiseworthy games were still beaten out in the VGAs. What does this mean? How could it happen during a year with so many successful hits? I’ve been pondering on these questions and believe this event is a pivotal sign in our video game culture that shouldn’t be brushed aside.

Over the past few years, the GOTY awards have normally been taken by the AAA titles: the hyped games with big budgets, intense graphics, and lots of action. This appeals to the majority that wants explosive entertainment and diverse gameplay, but TWG is a game with strengths in eliciting emotion and stretching morality. It has an overall focus on guiding the story and characters, which are aspects that enhance the personal side of a gaming experience (rather than the visual or “fun” factors). This is not as common to see in GOTY contenders, so it is surprising to see TWD triumph over its competitors this year. Therefore, I believe this is what our video game culture is starting to gradually gravitate towards. Many are getting tired of the shooters and action and want to play something that serves as an appeal to feelings. After all, the latter is what people tend to remember in life the most. Will we be talking about Max Payne 3 or Darksiders II in the next few years? A little, but TWD is something that is going to stick for a long time due to the deep impact it has had on those who have played it. The same goes for games like Journey and Bastion. They’re unique, rare, and offer something that most games cannot: a “spark,” which lights all of us on fire with wonder and amazement.

As the future is constantly changing and unforeseeable, I think all of us will be seeing even more games like these as the video game industry continuously evolves and starts producing all sorts of games with developed stories and characters.

Perhaps TWD really does deserve to be the GOTY, even when taking its shortcomings into account. I’m personally sticking with Halo 4 or Dishonored (can’t decide between the two!). Either way, there are so many excellent games from this year that need to be played by everyone. I’m really proud to be a part of it and am hoping 2013 will be an even better year for games…if that’s possible!

Do you believe that The Walking Dead deserves to be GOTY? Why or why not? If not, what is your pick for the GOTY? As for TWG, do you think it winning GOTY at the VGAs is a sign for changing tastes in our video game culture? Or is this not worth shaking a stick at? Sound out in the comments below!