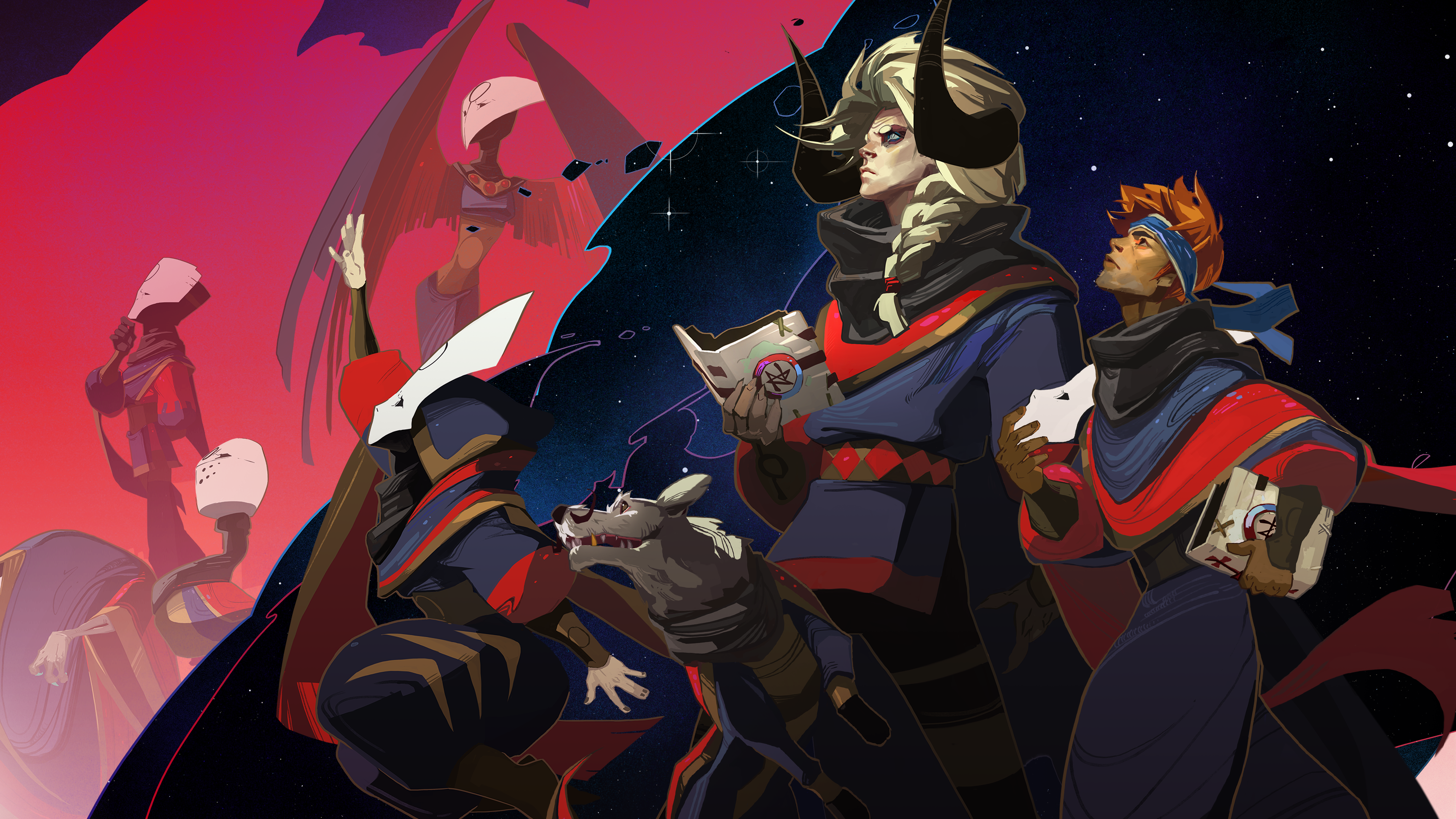 During Heavy Rain’s opening sequence, you get a glimpse into your character’s life. He has two sons named Jason and Shaun, and it happens to be the former’s birthday today, so you engage in some shenanigans to celebrate. One of these includes a mock sword fight with Jason, and while our videogame instincts would tell us winning is necessary and preferred, that’s not the case here.

The outcome can fall in your favor, but true victory is found in relinquishing the controller to let Jason win. It’s a rare moment in Heavy Rain, but Pyre adopts this perspective as a core theme in its story that influences the decisions you make and deconstructs your perceptions of winning and losing.

Pyre puts you in the role of The Reader. You’re discovered by a ragtag band of outcasts that have been cast down into a purgatorial wasteland called the Downside. You don’t know what you did to earn your sentence here, but at least you have the rare gift of literacy. It’s an essential component to overseeing Rites, which are fantastical sport matches that test the resolve, cooperation, and worth of two Triumvirates. Whosoever proves their glory with consistent victories will have a chance to absolve one of their own member’s misdeeds in a Liberation Rite, and he or she will be welcomed back to their previous homeland: the Commonwealth.

As I acquainted myself with my newfound friends and found even more throughout this pilgrimage of redemption, I discovered most of their so-called “crimes” hardily qualified as such. The Rites were instituted as a system of reform intended to rehabilitate the worst of the worst, but now the Commonwealth’s rulers abused it to silence their opposition.

It became a moral imperative to win on my team’s behalf and fight for freedom; they needed to return one by one to stoke the ashes of a revolution. However, my first Liberation Rite ended in humiliating defeat. I nearly restarted the match out of habit to prevent the other team’s unsavory member from receiving absolution he didn’t personally deserve, but I froze when I saw these words come up to confirm the outcome:

“Accept this, for it is done.”

I would hardly accept defeat in any videogame because I can (and am usually forced) to restart until I make things right. Pyre presents this as an option, instead encouraging players to  recognize that defeat is an expected part of the experience. One of its loading screens even reads, “Your story shall continue, regardless of the outcome of this or any Rite; you need but see it through.” Initially I saw failure as unacceptable. My vision of the greater good had to prevail above all else.

One of the Triumvirates, The Fate, taught me otherwise. When I summarily beat them early on, one of their members furiously refused to back down, but their gracious leader reminded him, “We do what is ordained, and nothing less.” Indeed, the Rites were created by an ancient group called The Eight Scribes, and most of the world’s characters believe they shape the fates and destinies of everyone for the greater good. As the Reader, you’re forced to accept this to a degree since the stars relay the Scribes’ will, astrologically dictating where your team ought to go next and who you’ll face. 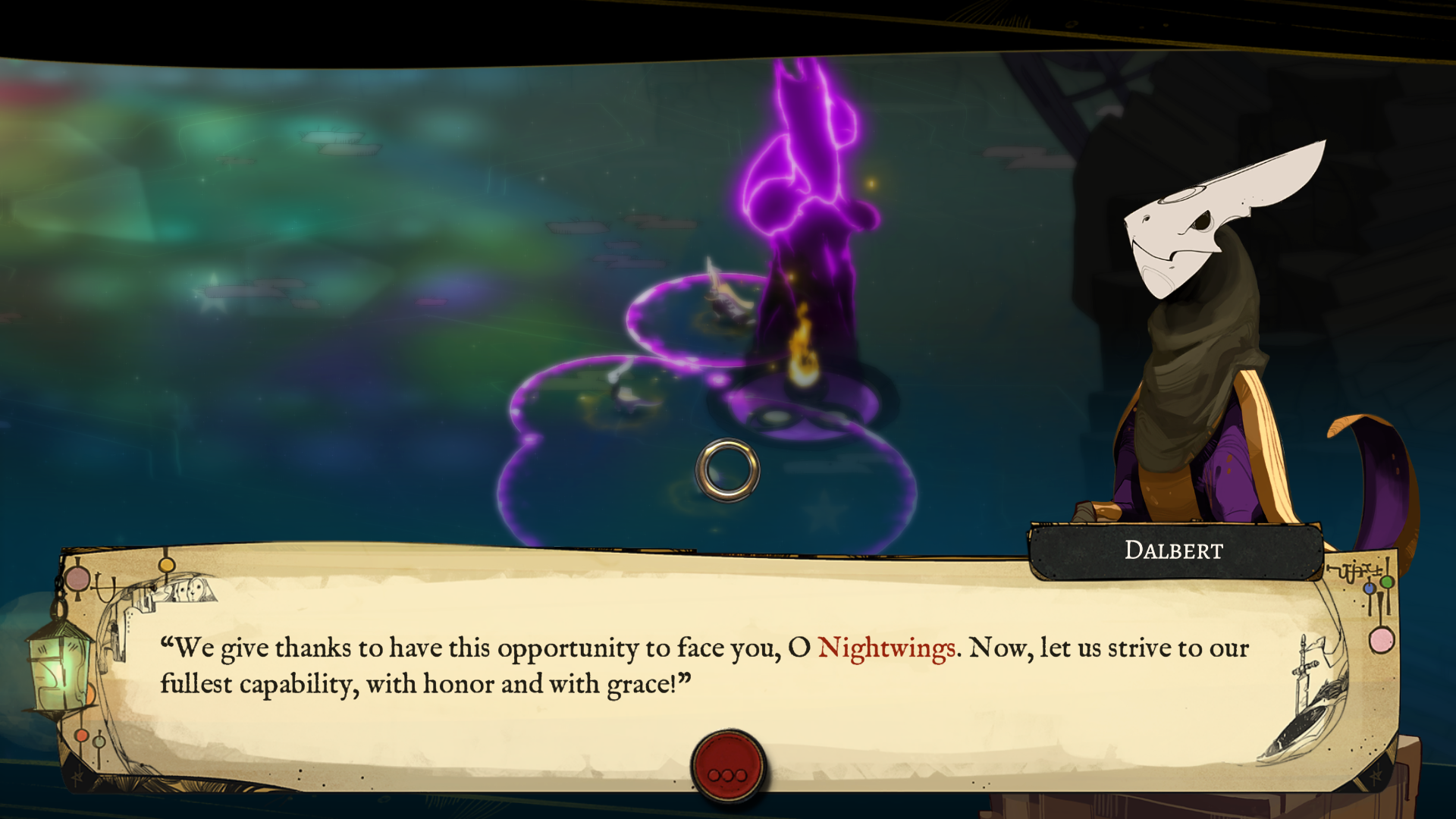 When everything was going my way, I was okay with the idea of the Scribes’ unseen hands guiding my team’s direction, but like that member in The Fate’s Triumvirate, I changed my mind when things went sour. I became much like Job’s wife, who scorned God for taking away her husband’s livelihood. But he told her, “Shall we indeed accept good from God and not accept adversity?” (Job 2:10)

In many single-player experiences, failure is game over. However, Pyre indicates that we aren’t meant to rewind the clock or possess extra lives because we often can’t see what’s best for us. Initially, I was only concerned about my friends and the outcomes I deemed best, but eventually I felt like losing to some Triumvirates who deserved to win. When I had a chance to reverse my loss when a victor offered his freedom to my appointed friend, I refused, even though I had doubted his integrity beforehand. I almost couldn’t believe what I was doing, but you could say that the Scribes’ teachings got to me:

“Mercy, even for the perpetrators of the darkest deeds. As our liege Soliam Murr drifted in an ocean of regret, he found there mercy, or rather, it found him, and it saved his life. Mercy! Freedom! They are intertwined.”

I could have transcended the rules of the Rites with endless second chances because, in the end, Pyre is a game. But whenever I restarted and altered the outcome, it always felt wrong, as if I had violated the spirit of the game in the game. As Solomon said, “There is an appointed time for everything” (Ecc. 3:1). Good things can and will arise at your expense. If you accept this and count your blessings, you’ll find yourself capable of a gracious mercy toward others, no matter the consequences. This is true freedom.