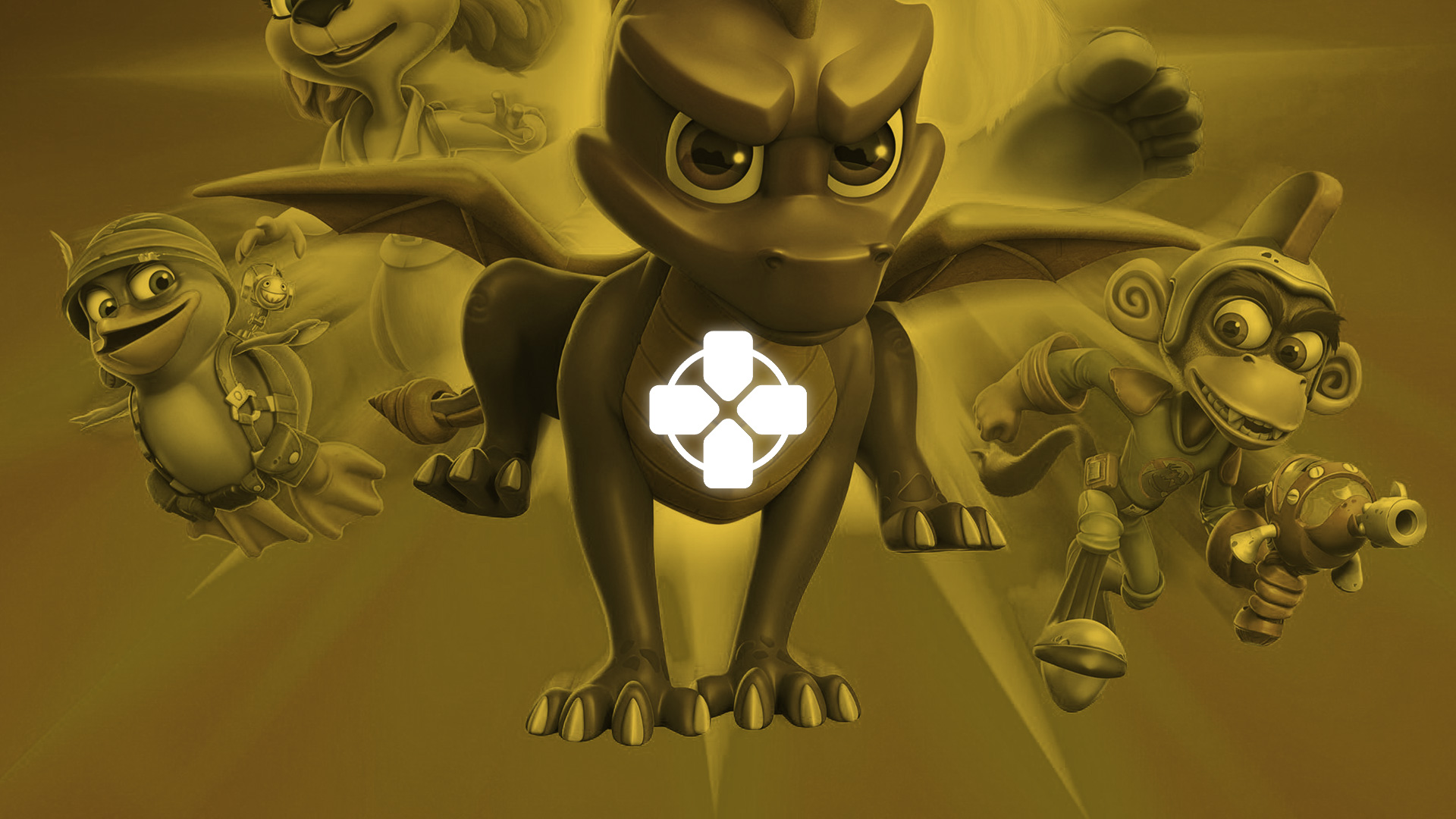 Spyro doesn’t have new tricks up his scales. He retains the same moves that he possessed in Spyro 2. It’s an ill-informed design choice since two or three new moves would’ve gone a long way to bring subtle wrinkles to platforming and combat. Nevertheless, the slack is picked up by four new protagonists. Once you free them from cages that Moneybags is guarding for the usual “small fee,” you can embark on fully-fledged levels that teach you their movesets for future side missions. The first character is Sheila: a kangaroo who can jump incredible heights and kick with her legs. The second is Sgt. Bird: an upstanding penguin soldier who can fly indefinitely (the irony is strong in contrast with Spyro) and fire rockets. The third is Bentley: an intellectual yeti who can move platforms and smash obstacles with his ice club. Lastly, there’s Agent 9: a deranged monkey with a ray gun that can pick up and throw grenades.

These characters’ moves aren’t as advanced as Spyro’s moveset, but they allow for simple distractions that break up gameplay in short yet welcome bursts. None of the characters feel awkward or stilted to play as with the exception of some glaring camera issues for some Sgt. Bird levels. Most games would build half of the experience around said characters so that the time spent developing them was put to good use. However, Year of the Dragon is content with singular levels designed around them. After that, they pop up as occasional, optional side content. It’s throwaway design, and it also applies to vehicles you commandeer for a few minutes on average and then forget about. There are even shocking twists with perspective for some side missions, such as a challenging Sheila level in 2D and an on-rails first-person shooter level for Agent 9. The inclusion of off-beat gameplay genuinely impressed and shocked me. All that work for a few, unique minutes of fun! 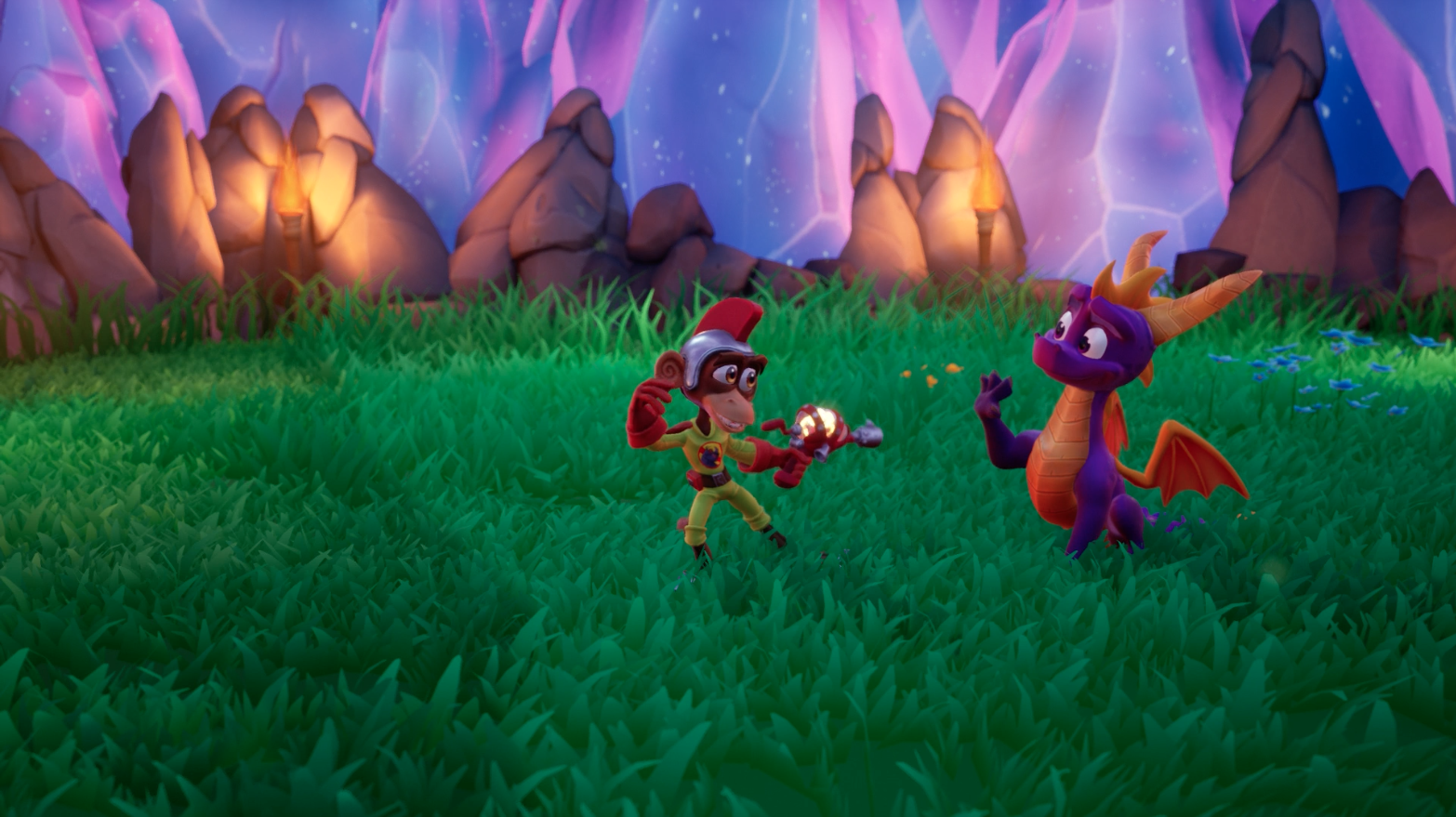 The Year of the Dragon…and new friends! You can’t help but love how different and friendly Spyro’s gameplay companions can be.

Strangely enough, a modern example that integrates smart throwaway design is Titanfall 2. One of its most exhilarating missions involves shifting between the past and present that cleverly influences combat and traversal. The time travel device you acquire at the beginning is destroyed upon completing your objective, and while it would’ve been nice to see it crop up later, it makes that level special, giving room for other new mechanics to shine on their own later on. Spyro 2 contains the same throwaway design with some side missions and minigames, but doesn’t have enough to constantly secure your imagination. However, it’s a double-edged sword for Year of the Dragon because there’s less focus and some pacing issues compared to Spyro 2. However, new playable characters and a breadth of diverse content help make up the lack of advances in Spyro gameplay and levels I wanted to see.

Year of the Dragon contains the trilogy’s best level design. There were some “aha!” moments in Spyro 2, but the third game has more with clever, well-hidden paths and collectibles. Levels like Icy Peak, Charmed Ridge, and Desert Ruins kept revealing their extensive depth up until I collected their last eggs and gems. More of the “there and back again” design I mentioned in the Spyro 2 review is found here with plenty that circle back on each other or criss-cross with vertical layers. Speedways have received an additional challenge each with races where you fly through rings while skirting the edges to gain speed boosts and rockets that slow down opponents. Skating parks could be considered new speedways as well since they appear as side missions on four maps, with the last two being my favorites. The first two are about beating records with stunts in a set time frame, whereas the last ones are races against AI where you perform flips and spins to boost and keep up with other racers, which is far more exhilarating. Hold your horns, Tony Hawk. Here comes Spyro. 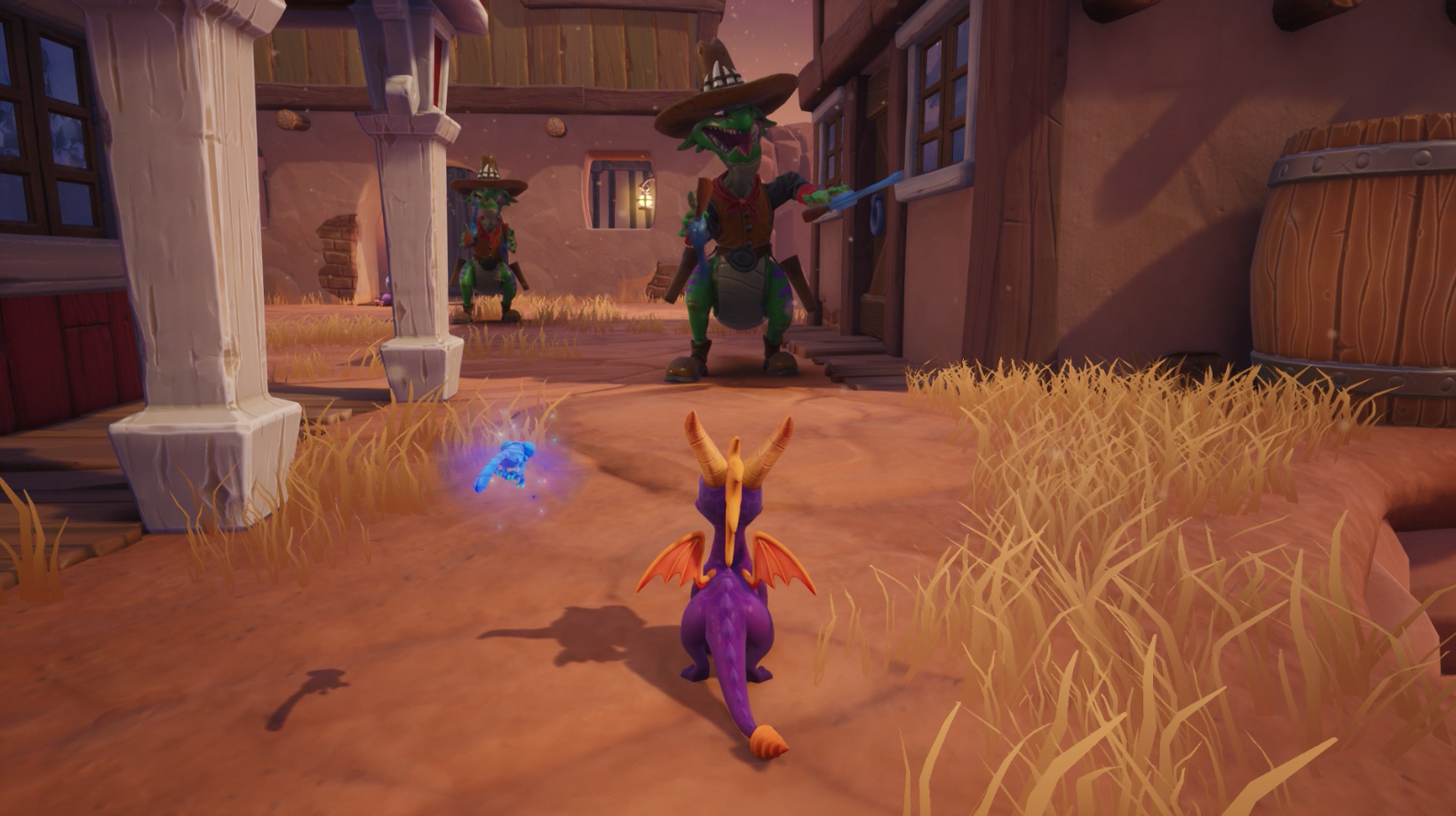 What’s this? Enemies that force you to ROLL because their attack can’t be out-jumped or outrun? Brilliant! It’s a shame Insomniac couldn’t make more enemy types that made rolling an incentive, but this is among a handful of enemies where the mechanic proves useful. Most of them reside in this game.

That’s not even mentioning the end-game Sparx missions! They’re top-down, shoot ‘em up dungeon crawlers where you explore narrow passageways, unlock doors, and fight bosses to attain dragon eggs. These missions are locked until the end-game state, which makes little sense considering how Sparx attains upgrades that help with gem retrieval, health buffs, and so forth. Nonetheless, this little experiment is icing on the content cake, and honestly, all these small explorations of other genres within this 3D platformer are cute, suitable introductions to younger players.Year of the Dragon is all about more, but it does feel like it’s dragon its feet a bit by the third hub world, coupled with boring, mediocre bosses. It’s hard to complain though with 12-14 hours of playtime thanks to 10 additional levels over Spyro 2. It’s amazing how the core experience doesn’t feel spread thin, but is as—if not more—well designed as its predecessor.

It would’ve been nice had side missions been smoothly connected to the main levels. I love Spyro the Dragon’s seamless flow because loading doesn’t seem present with the illusion of magic whirlwinds and flying through portals, but these moments are when the game takes time to load assets. Spyro 2 compromised a bit of that illusion yet kept all side missions within the same map. Year of the Dragon resorts to portals within levels that take you to self-contained areas. It would’ve been exciting to connect these places with secret tunnels or small stretches of flying with a power-up. Some of the worlds feel unnecessarily segmented because of this and compromise on the feeling of exploration, but I’m sure it was a concession for performance on the PlayStation 1. Instead of passing through a portal to play as another character like Agent 9, Spyro could fistbump him as the camera passes over to the monkey, who you control for a minute or so as you complete a fun platforming challenge to the new area. Once you come back, Spyro is sleeping while waiting for you, who you rose once more to continue his journey as the camera pans back to him. It’d be that same magical seamlessness, but I’m honestly nitpicking here. It’s enough that the load times and transitions—while jarring—are lightning fast. 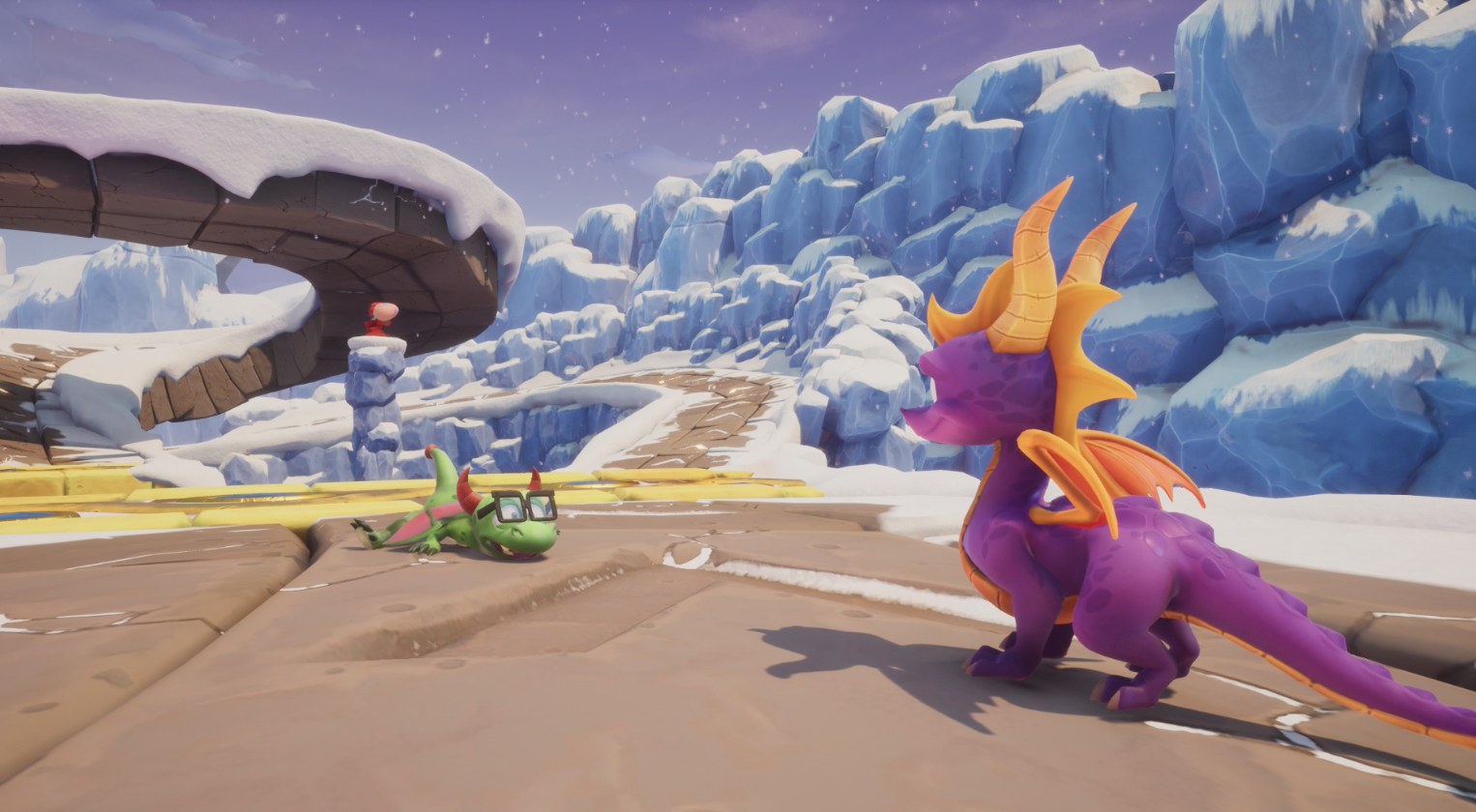 I would’ve love to have seen some old animations return for the baby dragons, but would’ve heartily welcomed new ones to replace some that are reused up to five times. Oh well, the children are still precious just like their big brother. Eggs are just like Orbs in that you acquire them through thieves, minigames, main objectives, and nooks and crannies of levels. So much to do!

Eggs! What about these eggs I’ve been mentioning? All is peaceful in the Dragon Realms until a hooded figure and a bunch of Rhynocs steal the dragon eggs. The burrowed tunnels they arrived through are too small for any dragons to go down except Spyro, so he’s set up to save the day with Hunter (who happened to be visiting) on the other side of the world. The so-called Forgotten Realms haven’t been occupied by dragons in a thousand years and their absence has meant magic has been draining away. The evil Sorceress is stealing baby dragons to bring magic back by force, and her prior alliance with the dragons all those years ago makes her backstory rather interesting and mysterious, even if she’s a cookie-cutter villain on the surface. There’s also more camaraderie between Spyro and Hunter as they look for eggs together, so their friendship comes through more clearly since he appears frequently. A surprising part of the cast is the hooded stranger named Bianca, who goes through a compelling arc from foe to friend. Her motives to become a magician eventually conflict with The Sorceress’ objective with dragons, so you see Bianca’s allegiance to learn magic, good conscience, and growing feelings for Hunter war progressively war against each other. She’s rather profound in a 3D platformer for kids since she goes through more development than Spyro himself, honestly being the most well-conceived, meaningful character in the trilogy. While there are no cutscenes prefacing worlds with momentary comic relief like in Spyro 2, Year of the Dragon still boasts the strongest characters and writing in the trilogy.

Stewart Copeland’s score is the wackiest in contrast to his previous soundtracks. Spyro 2 may have my favorite songs and style overall, but Year of the Dragon has plenty of catchy melodies, unexpected yet amusing instrumentation, and complex notation. It was evident that the composer was trying his best to outdo and solidify his style with the series, and I’d say he finished strong. Just like the other remastered games, his score has been dynamically adjusted to sound muffled when navigating the menus and ambient when not moving. All of the sound effects, voice acting, and animation are lovingly recreated with higher production values across the board. I also didn’t experience glitches with the exception of a lagging, slow-motion frame rate with Lost Fleet that forced me to restart the game twice. I assume it has to do with constantly restarting the skateboard race, so other than that, there’s just as much polish here as there is in the other two games. In fact, evidence of more is found in some in-game character animations that are made from scratch, specifically for Moneybags. It’s weird when he alternates between his generic set of movements and unique ones randomly, perhaps a sign that Toys for Bob would’ve liked more time to animate individual interactions but couldn’t. 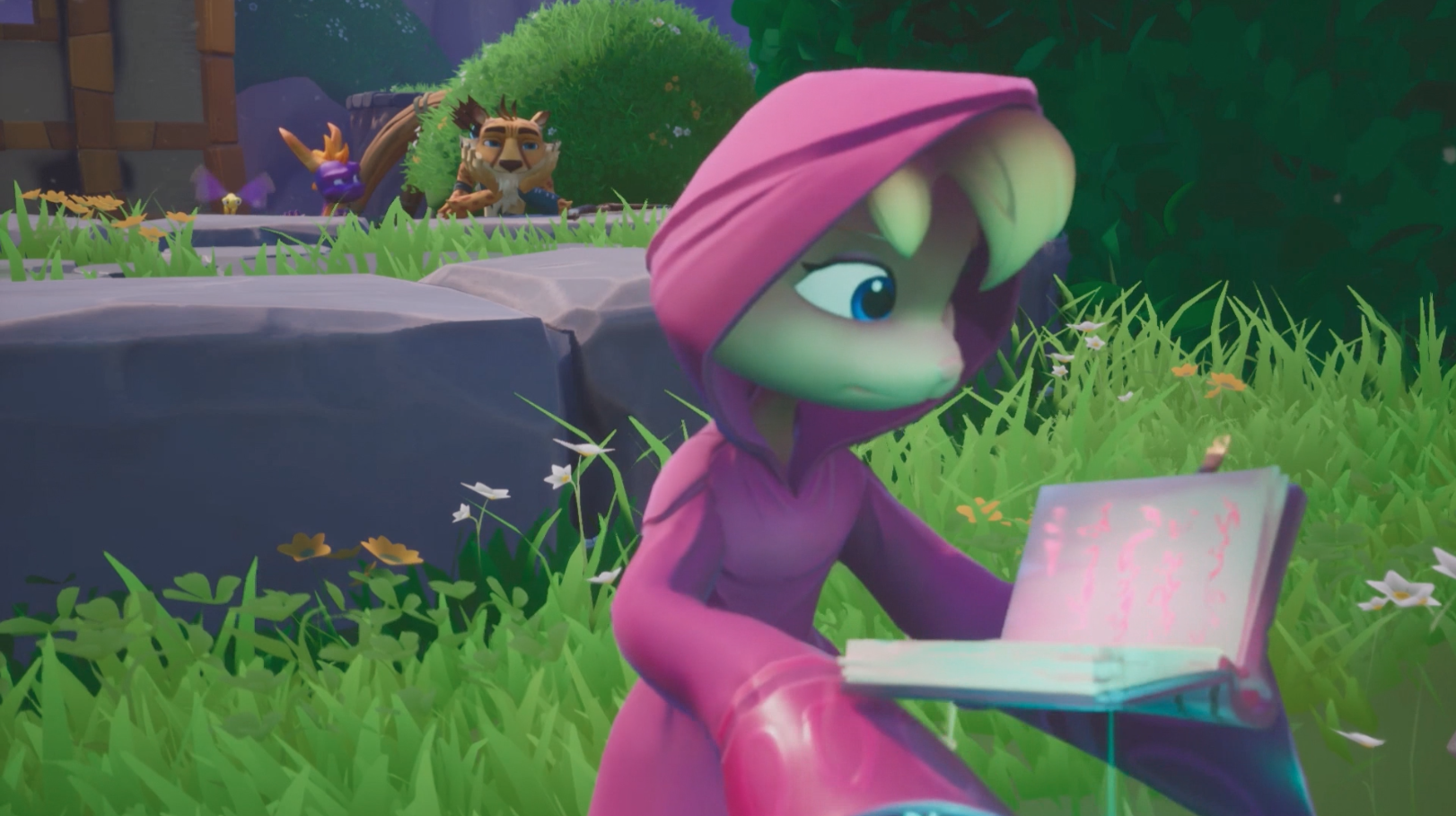 Seriously, Bianca is a seriously well-developed character compared to the trilogy’s entire cast. I don’t know what spurred Insomniac to make Year of the Dragon mostly her story, but I loved it.

Year of the Dragon is a bona fide example of a developer throwing stuff at the wall, seeing what sticks, and making it work. Even though such a liberal approach to game direction would result in shallow fluff for most projects, this game avoids the pitfall with its carefree approach to refining and adding content, even if it feels slightly overdone at times. A tighter grasp on its brand of humor and incremental improvements to the depth of levels help Insomniac Games finish strong with a title that easily stands alongside—and exceeds in some ways—the love I have for Spyro 2. It’s hard to believe I forgot so much about Year of the Dragon.

On a final note, Toys for Bob should be praised for helming commendable remakes of each title in the Reignited Trilogy. I thoroughly enjoyed reliving my childhood and would recommend it to anyone who always wanted to try or missed out on the heyday of 3D platformers. Spyro remains the most friendly, accessible, and whimsical of them all. Toys for Bob has my seal of approval to make a sequel if they’re up to the challenge. But for now, this is more than enough…thank you. 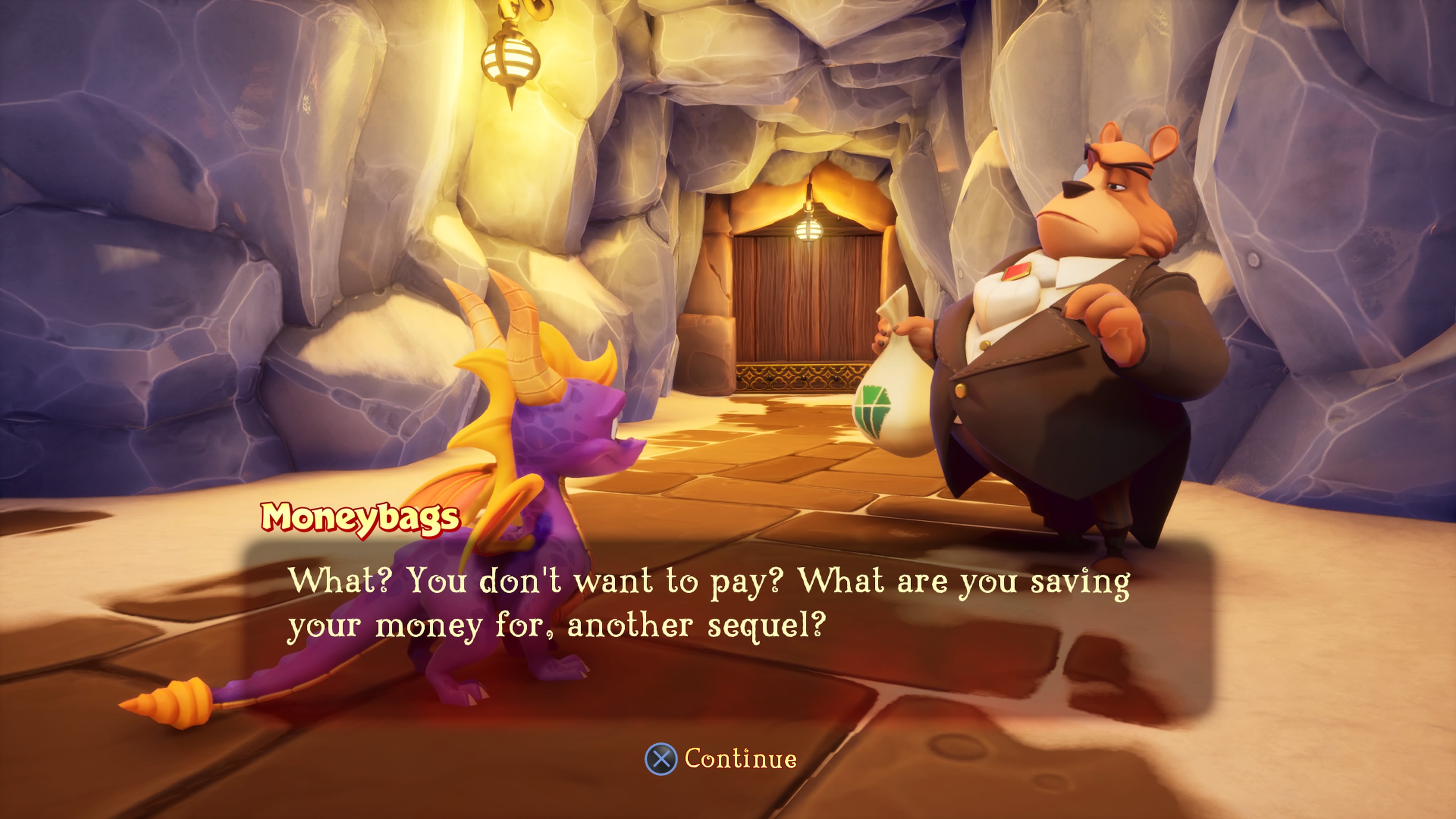 Do I have to answer that?